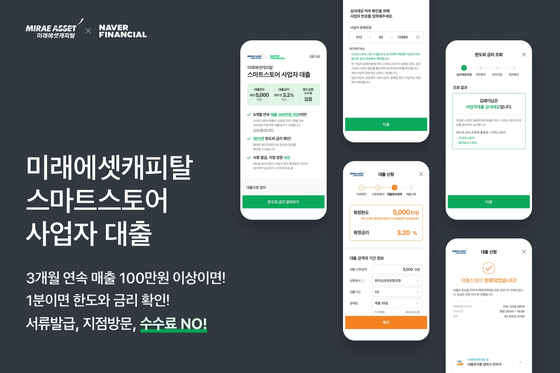 In partnership with Mirae Asset Capital, the new loan program will utilize what’s called the alternative credit scoring system (ACSS) to lend money to small companies that are underqualified to borrow money from traditional banking firms due to a lack of credit history and offline branches.

The ACSS is a culmination of Naver’s machine-learning algorithm, artificial intelligence and big data analysis on top of credit data collected from third-party credit bureaus.

To qualify for Naver’s new loan program, companies need sales of 1 million won ($903,000) for three consecutive months on Naver's shopping platform Smart Store. Companies can borrow up to 500 million won with a yearly interest rate of 3.2 percent to 9.9 percent.

“Existing loan programs for businesses approved loans for those who had offline shops and requested collateral citing a high possibility of businesses shutting down,” Naver Financial said. “The credit line and approval rate was very low. Those who only sell products online had to endure loan programs that had interest rates of between 15 to 24 percent.”

Applicants can check their credit line and interest rate with just a few touches on their smartphone on the Naver platform and the entire process is handled through smartphone devices.