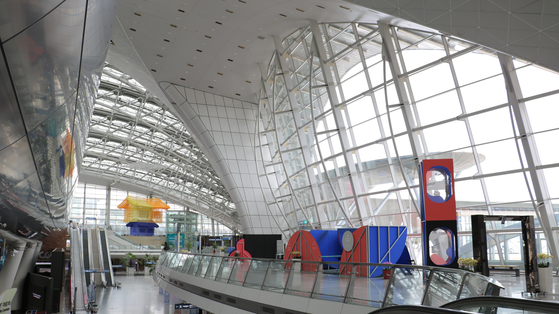 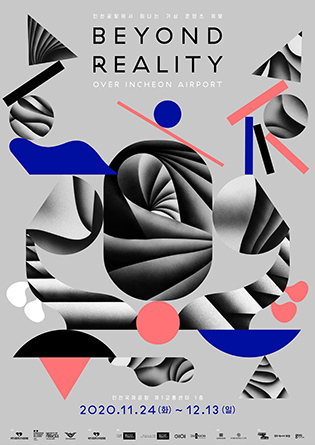 
A slow trickle of visitors began filling the almost empty Incheon International Airport last week, but not to jet off for some overseas travel.

They were at the airport to experience a virtual reality (VR) exhibition hosted by the Bucheon International Fantastic Film Festival (Bifan).

Titled “Beyond Reality over Incheon Airport,” the exhibition was put together by festival organizers who teamed up with the Embassy of France and the airport to host a total of 26 VR projects—11 films and 15 short interactive projects by artists from across the globe. The festival chose the location based on its theme that visitors can “escape” reality for a brief moment while immersed in a VR experience, similar to how they would escape on vacation.

These VR projects were supposed to be introduced in line with Bifan which was held in July, but offline events for the film festival were canceled due to an escalating number of coronavirus cases at the time. Although the situation has not improved much since then, staff will be taking extra care to disinfect the VR headsets after each use. Visitors will not have to remove their masks and will also be provided with eye masks as an additional precautionary measure.

Fifteen interactive VR experiences located around the first floor at Terminal 1 of the airport—with the briefest spanning four minutes to the longest lasting 45 minutes—each formulate an intricate story and offer a high-quality virtual world where users become ghosts from the underworld revisiting their homes. One of the projects is centered on a surreal world where there’s no gravity, while another allows visitors to experience a spiritual ceremony which takes place in the deepest regions of the Amazon. 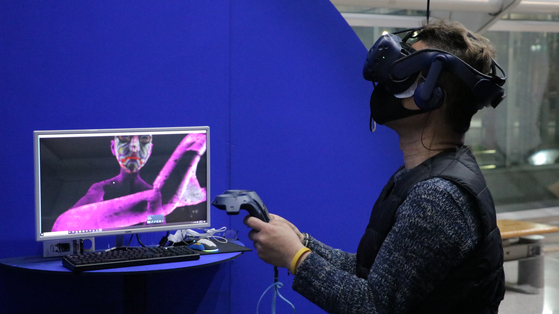 
While the messages, beliefs and questions that the artists aim to ask users are very clear in each of the projects, their storytelling styles and how they structure the virtual world completely differ from one another.

Some of the projects see the users become the main protagonists, while others assist the main characters or tag alongside them. Some fluctuate between the two. What is certain is that users will not be bored.

The following are six recommendations that the reporter experienced firsthand.


*The exhibition runs through Dec. 13 at Incheon International Airport Terminal 1. Tickets are free but visitors are strongly recommended to make a reservation through the festival’s main website (www.bifan.kr/). 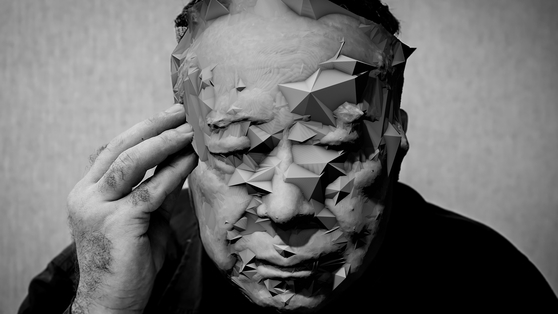 Set when Taiwan was under martial law in the 1960s, the story begins when an old political criminal finds he has died and his body decomposing into digitalized forms after being used as an experimental subject. The user latches on to the ghost and sinks into the underworld.

In the seventh month of the Taiwanese lunar calendar, the underworld gate opens for ghosts to revisit their families, and as the ghost enters his empty home, the extent to which the government is controlling the lives of the people and the media is shown.

Based on his own memory, the artist paints a bleak dystopian past where autocracy and advancing technology fuse to put people under surveillance. 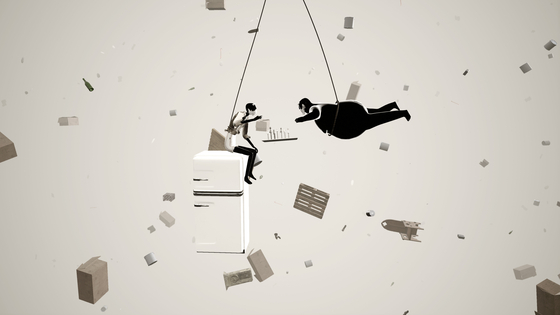 In this surreal world where the concept of having two feet firmly on the ground does not exist and objects float freely everywhere, two brothers — Osorio and Benedito — live surprisingly peacefully. That is, until Osorio comes across one particular item — a telescope. Due to this new discovery, everything that Osorio previously knew or believed in is upended, while Benedito continues to live on obliviously. The two brothers, although physically together, no longer seem to be living in the same world.

After one particularly heated argument, the two decide to go separate ways, and the user must also make a choice about who to follow — the knowledgeable Osorio or naïve Benedito. Different endings will result based on the choice the user makes. 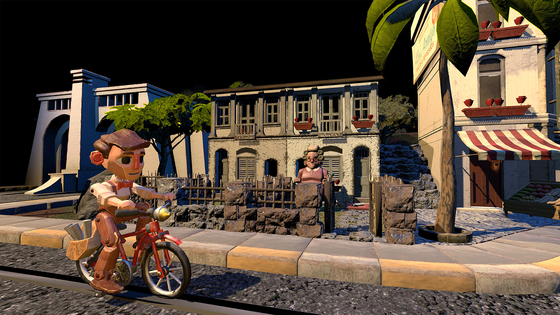 In this miniature world, viewers find themselves staring into a model of the city of Sao Paulo in the 1940s, where everything is perfectly timed and in routine. But to get things rolling, the user must push the buttons, tweak the switches and pull the levers in order for the dolls to get on with their lives.

One doll that comes into focus is Pedro, a newspaper delivery boy who begins to do things out of his regular routine to show his affection for a girl named Rosa, who lives at the corner of the model growing flowers in her garden. Every day Pedro follows the same route trying to muster up the courage to confess his love — and every day he returns disappointed, vowing to try again the next day.

Will he finally succeed? Whether or not the story will have a happy ending all depends on Pedro’s courage, and the user. 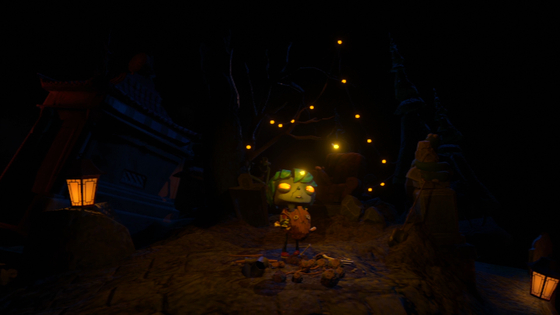 While this story offers no VR interaction, it does lead the user into the virtual gothic fairytale world of a young zombie boy called Gloomy and a human girl named Nena.

In their universe, the sun decides to hide from the world, tired by humans and their cruel ways. With the sun gone, darkness awakes the zombies from their graves.

Nena’s uncle is in charge of eradicating the creatures, convincing the townspeople that the sun will rise again once they are exterminated.

Nena and Gloomy meet secretly, and the sun is warmed again by the purity of their love. But when Nena's uncle finds out about them, he plans to kill Gloomy. Will Nena and Gloomy be able to escape?

Narrated by actor Colin Farrell, the story is Tim Burton-esque in the depiction of the characters’ movements which are both grotesque and beautiful. 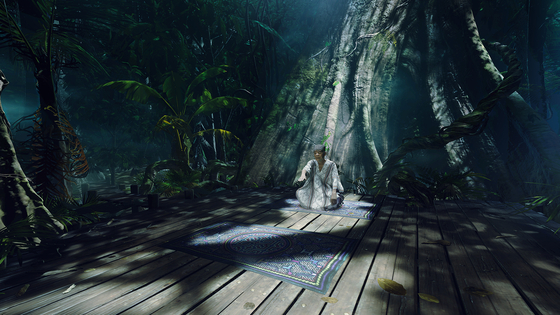 Ayahuasca is an indigenous plant passed down for centuries from the ancient tribes in the Amazon rainforest and is traditionally believed to have healing powers when brewed by the local shamans or healers.

When consumed, the medicine can induce visions of crawling serpents, palaces, exotic patterns and alien beings—but also gently guides the participants through their worst memories or traumas, and helps them overcome their painful experiences.

Artist Jan Kounen took part in this mysterious spiritual practice in Peru and turned it into a virtual experience for users to indirectly experience what he’d felt after drinking the Ayahuasca brew.

The whispery chants by the healers, the serpents, palaces, exotic patterns and strange beings are all there—and while the experience does not provide any healing effects, for a brief period, the user is guaranteed an extract of the estranged reality that they’ve never experienced before.

Of the 15 VR projects in this exhibition, this is the only one that’s R-rated. 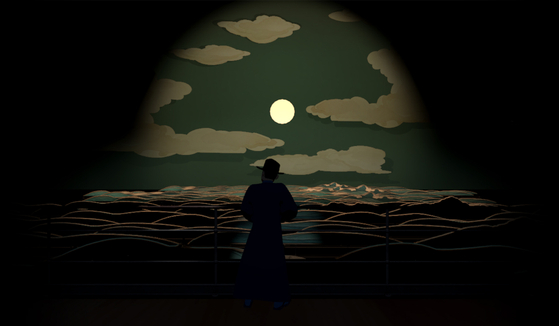 
In 1935, Yonezo Okita left his home in Hiroshima, Japan to start a new life in Canada with his wife. But the advancement of World War II ruined everything, and he and his family became outcasts.

Three generations later, his grandson Randall Okita created this virtual interactive experience based on photos, letters and snippets of tales from his father and grandfather to show users the experience of a Japanese immigrant in a foreign land during the war period.

The users follow the grandfather’s journey from the very beginning in Hiroshima when packing the belongings the family will take to Canada, and they assist him and his family in building a new home, farming, taking photos and more — until one day, everything changes.