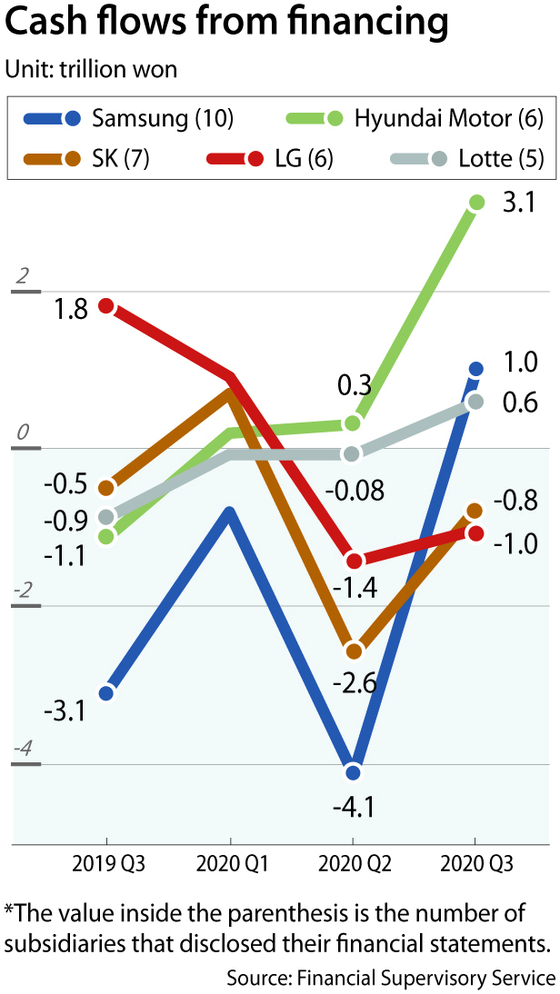 Major local companies are desperately raising and stashing away cash in case of emergency as there is currently no light at the end of the tunnel in the coronavirus pandemic.

In the third quarter, large companies had a positive 2.9 trillion won ($2.6 billion) of cash flow from financing activities, according to a joint analysis by the JoongAng Ilbo and the Korea Economic Research Institute (KERI) released Tuesday.

This indicates that the companies were selling shares or bonds or borrowing from banks.

The universe for the study was 34 listed companies associated with the five largest chaebol.

Through the second quarter, the cash flow from financing activities by these companies was a negative 7.8 trillion won.

Cash flow from investing activities was 19.6 trillion won during the third quarter, 75.1 percent higher than last quarter and up 18.9 percent on year. A positive reading suggests that companies are unloading assets more than they are buying them.

As the pandemic wore on, cash flow from operations declined. It totaled 15.7 trillion won in the third quarter, a 33 percent on-quarter decrease and 11.4 percent on-year fall.

“‘Untact’ businesses are on the rise due to the coronavirus pandemic, but all of Lotte’s businesses are contact-based. Lotte has a big thirst for investing in e-commerce and distribution centers with secured cash,” said an industry expert.

SK Group Chairman Chey Tae-won has ordered group companies to secure cash by any means necessary, saying that without cash, the companies cannot respond even when there is a decent offering in the market.

With abundant cash, SK hynix in October acquired Intel’s NAND business. SK Innovation in September issued 400 billion won worth of bonds and is currently pushing forward with selling shares of SK Lubricants. This move was an attempt to proactively invest in the battery business, which is considered SK’s new growth engine. SK Innovation is also preparing for the initial public offering of its subsidiary SK ie technology.

“Although [there are reports of] vaccines being developed, a disaster can happen within the next two to three months due to resurgence of coronavirus cases. SoftBank aggressively sold its assets in preparation for the worst case scenario,” said SoftBank CEO Masayoshi Son, who is known for making big investments, during a New York Times conference in the United States in November.

Son has acquired $60 billion in cash after selling assets, including Britain-based semiconductor and software company ARM.

“Major companies are resuming investment for the post-coronavirus market, but if the pandemic continues, the profitability of corporations will fall, and their investment ability will gradually diminish,” said Hong Sung-il, head of economic policy team at KERI. “There needs to be institutional support, such as improvements in regulations and tax credits, so that companies can put the secured cash toward investment in plant and equipment and research and development.”