The main reason behind the takeover is to stabilize the airline industry,  which has been battered by travel restrictions from Covid-19. Following the announcement of the acquisition, Hanjin KAL said, “Korean Air Lines as well as Asiana Airlines could be placed in a dangerous situation if Covid-19 continues.” 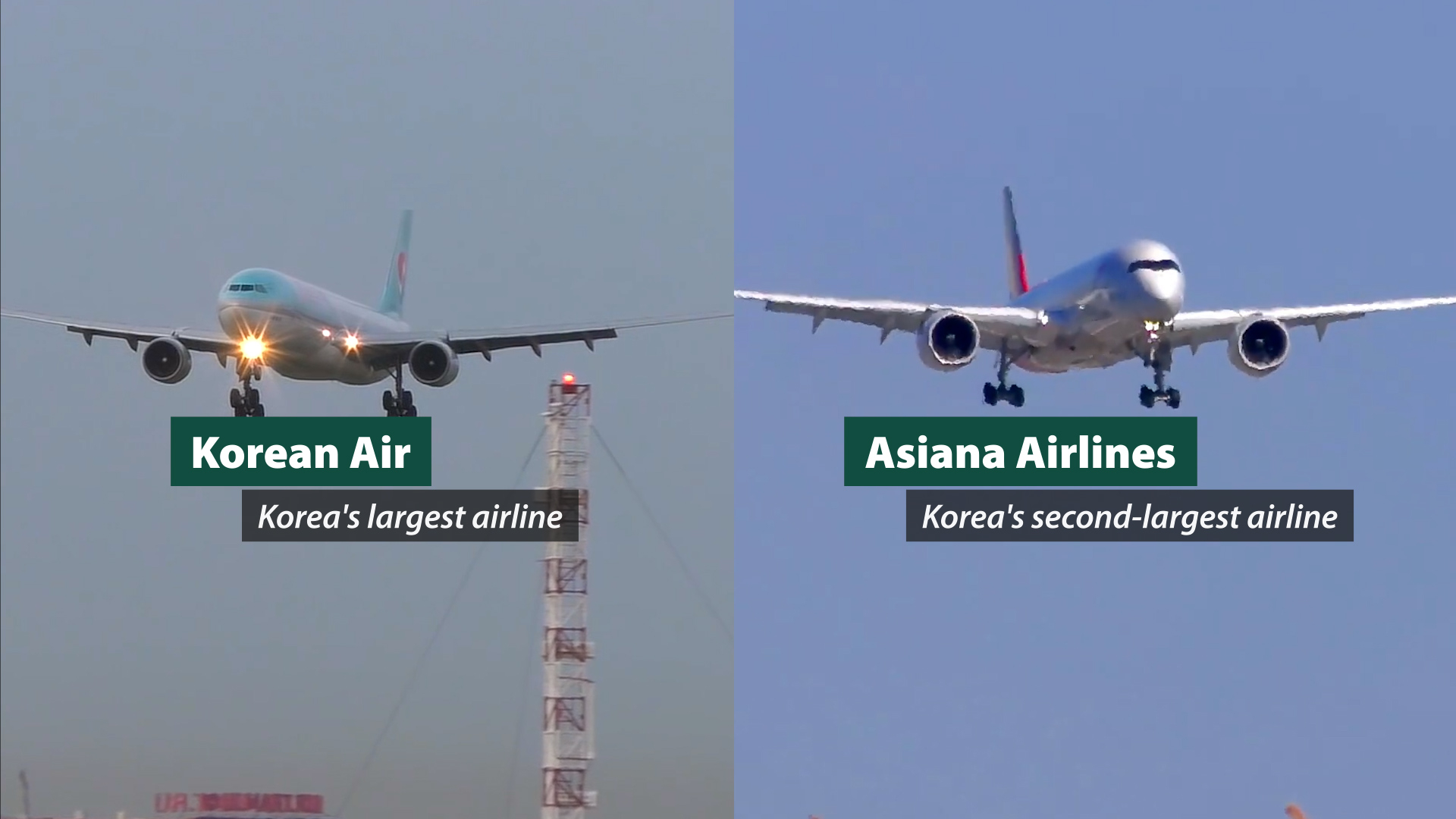 How big will the mega-carrier be?

The mega-carrier will become the world’s No.7 carrier by capacity to transport passengers and cargo, according to 2019 IATA (International Air Transport Association) numbers provided by the Korea Development Bank (KDB).

Revenues for the combined entity is estimated at 15 trillion won ($13.5 billion).

To actually acquire Asiana Airlines, Korean Air Lines needs the approval from the Fair Trade Commission. As of late last year, the combined domestic market shares was 62.5 percent. The figure includes the market shares of their budget carriers.

It also needs to win the approval from overseas authorities in destination jurisdictions.

What will happen to LCCs owned by Korean Air Lines and Asiana Airlines?

They each operate budget carriers. Korean Air Lines operates Jin Air, while Asiana Airlines has Air Busan and Air Seoul as its subsidiaries.

They will be merged into a single budget carrier.

When the three LCCs are operated under one airline, its sales are expected to surpass that of Jeju Air, currently the biggest budget carrier in Korea.
In Korea, there are nine LCCs. 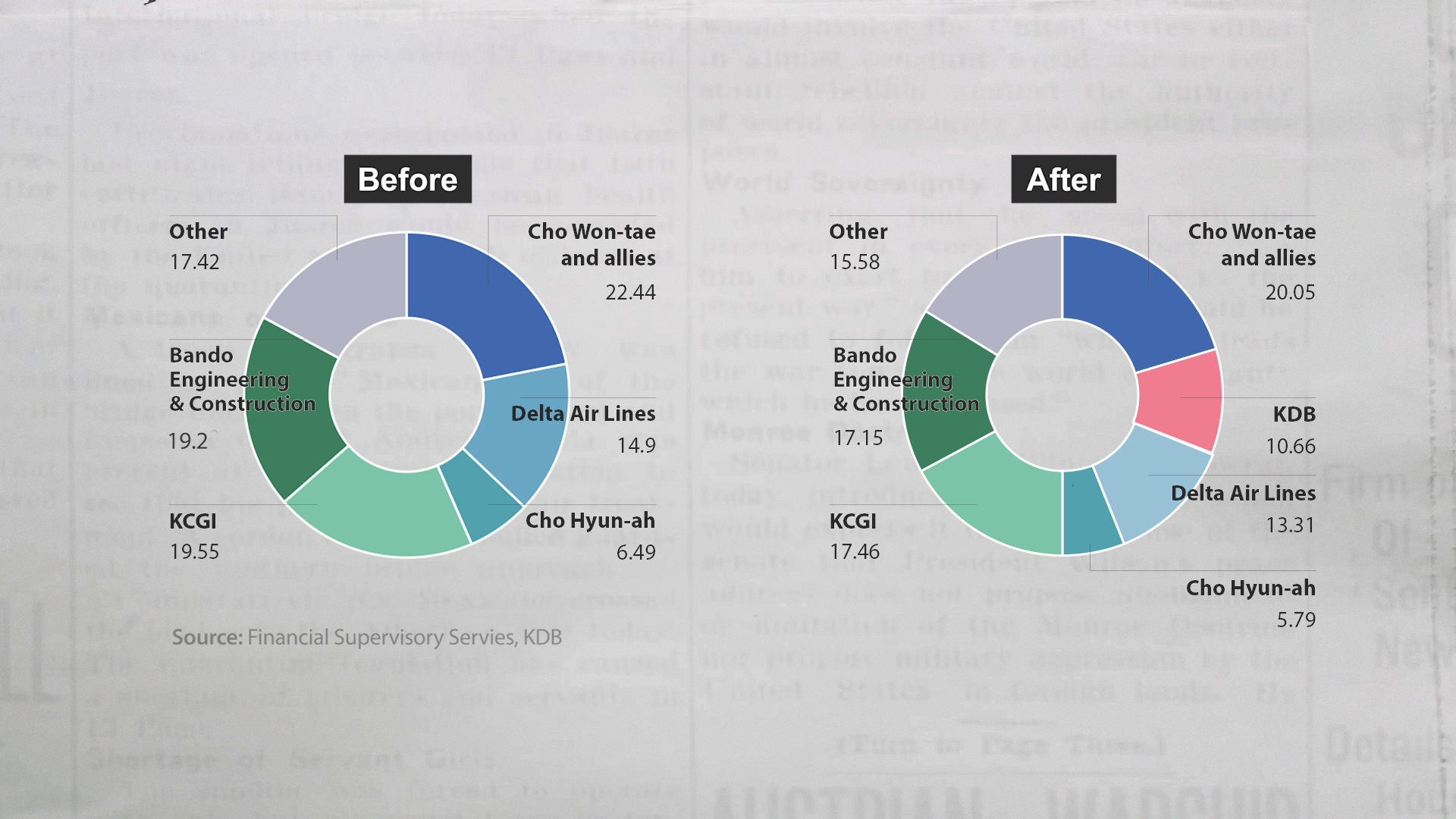 Hanjin KAL shareholdings before and after KDB financing

How will Korean Air Lines finance the acquisition of Asiana Airlines?

Korean Air Lines will then use 1.8 trillion won of the newly raised capital to become the biggest shareholder of Asiana Airlines.

What are the benefits of the acquisition?

A single legacy carrier means it can secure more routes and operate more efficiently, lowering costs for the airline’s operation.

As of November, there are 48 international routes where Korean Air Lines and Asiana Airlines cooperate. The mega-carrier could disperse the timing of the overlapping routes, offering more options to transit passengers.

Based on its stronger presence in the market, the mega-carrier could also form joint ventures with overseas airlines. This would enable them to enjoy a combined network of destinations. 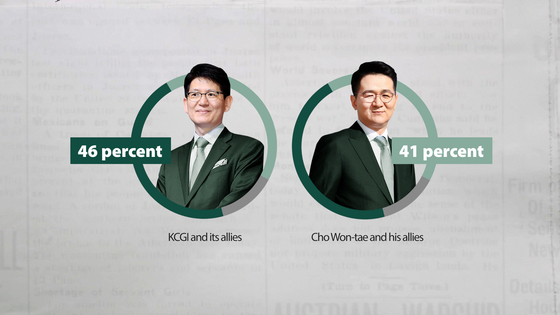 What are some of the challenges for the acquisition?

One of the biggest concerns is employment. Unions of both Korean Air Lines and Asiana Airlines argue the acquisition could result in layoffs — despite promises made by KDB and Hanjin KAL Chairman Cho Won-tae to keep jobs at both companies. About 800 to 1,000 jobs are duplicated.

That calculation assumes that Delta Air Lines, which owns 14.9 percent of the stock, will support Cho. Delta has never commented on how it will vote.

The coalition also believes that KDB will vote with Cho.

What would a mega-carrier mean for travelers?

Travelers can enjoy integrated loyalty programs. This means passengers who own Asiana Airlines mileage points can use those points to purchase plane tickets offered by Korean Air Lines.

Despite there being only one FSC, some believe it won’t result in the increase of airline ticket prices because air travel is an international business.