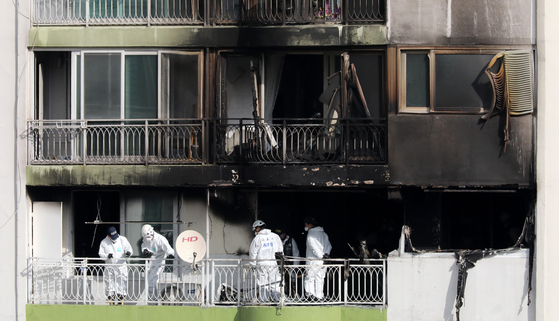 Police and firefighters inspect Wednesday the scene of a fire at an apartment building in Gunpo, Gyeonggi, which led to 11 casualties including four deaths. [NEWS1]


Police authorities launched an investigation Wednesday into the cause of an apartment building fire in Gunpo, Gyeonggi, that killed four people and injured seven others Tuesday.

The fire started on the 12th floor of the 25-story building around 4:37 p.m., with smoke and flames billowing out of windows. Firefighters got the blaze under control after around 30 minutes and extinguished it by 5:40 p.m.

Witnesses said remodeling work had been underway on the 12th floor when an explosion was heard.

Two remodeling workers in their 30s fell to their deaths, while two residents of the building were found dead in a stairwell leading to the roof.

The Gyeonggi Nambu Provincial Police Agency said Wednesday that police and firefighters conducted an on-site inspection from 10:30 a.m. to 3 p.m. and concluded that an electric heater on the 12th floor was the cause of the blaze.

There were eight people in the apartment being renovated at the time of the fire — three residents and five workers.

Police said the electric heater had been turned on in the living room while remodeling work on the veranda was underway, and they found 15 cans of polyurethane spray foam.

The remodeling company had been contracted for the day. The electric heater was brought by its workers and all windows in the apartment had been opened. Police are investigating if the heater malfunctioned or overheated, and also will be examining the material collected from the site to find the source of the fire.

Of the victims, the 31-year-old worker who died from falling out the window was a groom-to-be whose wedding had been pushed back to February because of the Covid-19 pandemic.

The other 38-year-old worker was an illegal immigrant from Thailand. Three foreign workers who survived were confirmed to be illegal workers. Police have passed the case to the immigration office.

The two victims who died trying to escape to the roof were female residents who lived on the 13th and 15th floors. One was a 35-year-old nurse at a hospital in Gunpo who had the day off. She leaves a husband and a six-year-old son.

The other was a 51-year-old woman whose son was seriously injured in the blaze. That family moved into the building three months ago.

The two women were believed to have died of smoke inhalation.

The six other injured people were treated at a nearby hospital for smoke inhalation. They remained inside their apartments until firefighters brought a ladder to rescue them.

Besides the two workers who died, the six other residents of the apartment being renovated were able to escape. All later testified that the electric heater went up in flames.

Han Sang-hoon, a 29-year-old driver of a ladder lift truck, the kind used for relocations in Korea, emerged as a hero by saving three people.

He arrived at the apartment around 3 p.m. that day to help with the remodeling work when the fire broke out.

Witnesses said that Han braved the smoke to rescue people from the 12th and 15th floors. He first rescued a woman screaming for help from a 12th-floor balcony with the ladder.

When firefighters arrived soon afterward, they did not have ladders long enough to reach the high floors.

Han told the JoongAng Ilbo Tuesday, “I saw someone wave from the 15th floor and had to raise the ladder again.”

This was tricky as the ladder only reached 38 meters (125 feet), and the 15th floor was 41 meters high. He was still able to rescue a pair of siblings. One of the students was a high school senior set to take the College Scholastic Ability Test on Thursday.

Despite being praised as a hero, Han expressed regret that he was not able to rescue more people.

“I thought there were two victims who had died, but heard through the news that there were additional deaths,” said Han tearfully. “I feel very sorry and keep thinking that if I saw them, I would have been able to rescue them.” 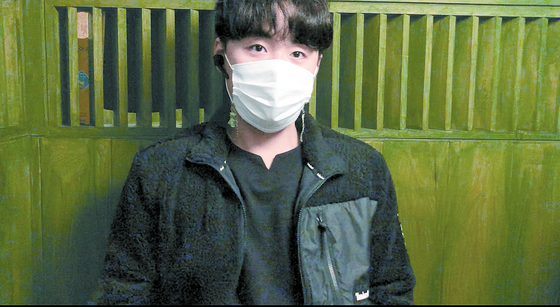 Han Sang-hoon, the 29-year-old head of a ladder lift truck business, emerged as a hero during the Gunpo apartment fire, saving the lives of three people. [CHAE HYE-SEON]