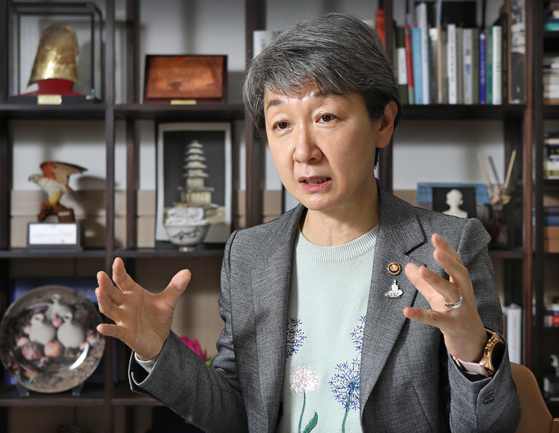 
Cultural heritage is not merely something to be preserved, but is also a “source of creativity and social values,” said Chung Jae-suk, head of the Cultural Heritage Administration (CHA) in a recent interview with the Korea JoongAng Daily.

That is why CHA is shifting its focus from “preservation” to “application,” Chung explained.

Chung, 59, also emphasized the importance of digitization of cultural heritage for both preservation and application, such as three-dimensional (3-D) scanning of historical artifacts, buildings and sites. That can lead to virtual reality (VR) or augmented reality (AR) experiences of them.

Chung was a journalist specializing in arts and culture for more than three decades before becoming the head of CHA in 2018. Throughout the interview, she demonstrated flexible and progressive views about cultural heritage. They are in accordance with the new Cultural Heritage Charter, the first revised version since its establishment in 1997, which will be announced on Tuesday. The agency decided to revise the Charter in March after finding that a majority of polled experts and the general public were amenable to a revision.

The 1997 Charter starts with these sentences: “Our ongoing efforts to understand...and nurture this cultural heritage deepen the love of our country and of our fellow countrymen. All of us must work together to protect our historic relics... from becoming damaged or destroyed.”

The draft of the 2020 Charter, which Chung showed the KJD, starts with these sentences: “In this land with a long history is living our people’s precious cultural heritage. Cultural heritage is the roots of our life, source of creativity and assets of all humankind. It is both our right and duty to know, find and nurture cultural heritage to add new values.” The revision suggests a less nationalistic and more future-oriented perspective about cultural heritage.

The Korea JoongAng Daily sat down with Chung at the National Palace Museum of Korea in Gyeongbok Palace in central Seoul on Nov. 27. Here are excerpts from the interview.


When the government announced a policy to promote the “New Korean Wave” last summer, it included traditional culture as well as K-pop and films. Could you illustrate how cultural heritage can be part of a New Korean Wave?


If any cultural heritage is combined with a contemporary cultural industry to be created into effective content, such as the use of Gyeongbok Palace as the set for a performance of K-pop band BTS in September, it can be a New Korean Wave.
For another example, we recently developed the seven Korean Heritage Routes, which are two-day or three-day itineraries to help visitors effectively tour Korea’s heritage of tangible and intangible forms together, including those on the Unesco lists of World Heritage and Intangible Cultural Heritage of Humanity. They can be made good use of by the tourism industry. Among them are the Confucian Academy Route and Asceticism Route, which respectively focus on seowon, or Confucian academies, and sansa, or Buddhist temples and monasteries in mountains.

Not only cultural services but also manufactured goods or technologies can make the New Korean Wave. I recently visited Heritage Korea 2020, an exhibition of products regarding the preservation and repair of cultural assets, and found that renovated traditional pigments and glues can be competitive export goods. In addition, digitization technologies, which were also part of the exhibition, were impressive. 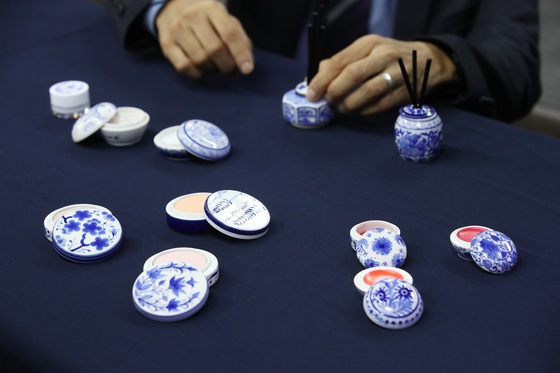 Based on the recent research results on a set of cosmetics discovered in the tomb of Princess Hwahyup (1733-52), a cosmetics brand, Princess Hwahyup, was developed and will be launched early next year as part of the New Korean Wave. [YONHAP NEWS]

What kinds of digitization projects for heritage are now going on?

We have been 3-D scanning cultural heritage since 2012 after the 2008 fire on Sungnyemun (Namdaemun), or the Great Southern Gate, and the 2005 loss of an ancient bronze bell in Naksan Temple due to a forest fire. We will spend 73 billion won ($67.3 million) in total to build a 3-D scan database for 4,000 pieces of registered cultural assets between 2021 and 2025. The constructed database will be used not only for scientific preservation and management of the heritage but also for derivative 3-D content [for education and entertainment].

We are also focusing on VR and AR restoration of lost cultural assets. We already restored Donuimun, or the Great Western Gate, in VR and AR in 2019, after it was dismantled in 1915 during Japanese colonial rule (1910-45). The project was very popular among the general public. We also launched the three-year Hanyang[Seoul’s old name] City Wall Time Machine Project this year. It encompasses the 3-D restoration of different landscapes over time of major historical sites in Seoul such as Gyeongbok Palace, Jeong-dong streets and Jongmyo Shrine, which can be used in VR or AR experiences. After the Seoul project, we will extend the time machine project to other historical cities.

The importance of digitization seems to have increased during the Covid-19 pandemic.


I had already been emphasizing the importance before the pandemic and the current situation is bolstering my view. I think cultural heritage is a kind of vaccine [against negative mental viruses]. Cultural heritage provides a kind of system to prevent the epidemic [of depression and demoralization] in this Covid-19 era. Therefore, now, it is as important to make good use of cultural heritage for our lives as it is to preserve it. Reflecting this idea, the revised Cultural Heritage Charter will cover application of heritage and its creation of social values. The new edition will also cover natural heritage, which was not really dealt with in the previous edition. 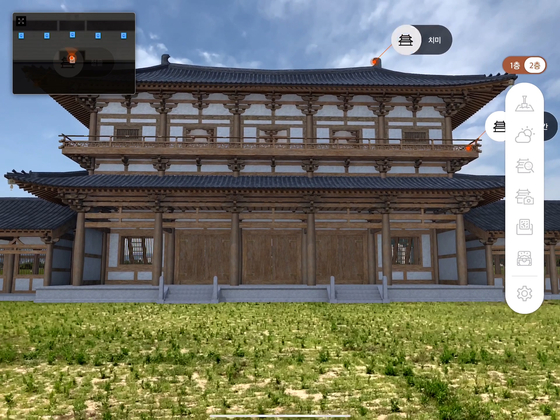 A part of Hwangnyong Temple, the biggest temple of the ancient Silla Kingdom (57 BC - 935 AD) later destroyed duing a war in 1238, was restored via augmented reality in July as part of the Cultural Heritage Administration’s digitization projects. [CULTURAL HERITAGE ADMINISTRATION]


How are CHA’s efforts to repatriate Korean cultural assets overseas going? What is the difficulty in these efforts?


We presume that there are 190,000 pieces of Korean cultural assets in 21 foreign countries, with about 82,000 pieces, or 42 percent, of them in Japan and 53,000 pieces, or 27.5 percent, in the United States. But not all the pieces overseas are our targets of recovery. Only the cultural assets illegally or unjustifiably carried out of the motherland are targets for retrieval. As for the cultural assets legally and justly carried out, it is our policy to cooperate with the foreign institutions that keep the pieces so that the artifacts should be well protected and used for promoting Korean culture.

Accordingly, it is most important to know whether an artifact in question was carried out of Korea legally or illegally. However, it is not so easy to know this in reality due to a lack of documents and records. This problem, as well as a small budget, is a major difficulty in our overseas Korean cultural heritage retrieval project.

Despite such hardship, we succeeded in bringing back 339 cultural heritage pieces in the last three years, through negotiations or purchases. The latest example is the Joseon-period (1392-1910) sundial called angbuilgu, which we managed to purchase in the United States and unveiled to the public in November.

Now, overseas explorations to find Korean artifacts have been interrupted by the Covid-19 pandemic. Even without the pandemic, the explorations have been suffering from a shortage of workforce. It is important to build a network of experts who stay in a certain foreign country and can continue to not only search for Korean cultural heritage there but also negotiate again and again, because the procedures of finding and negotiating to retrieve cultural heritage tend to take a long time.

What are the important projects of CHA next year besides the digitization project?