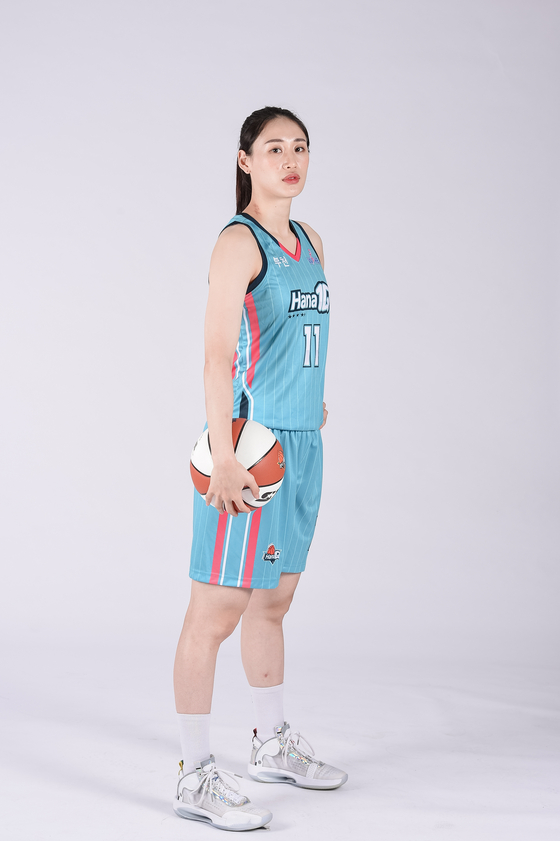 
There’s no doubt that Kang Lee-seul is one of the best three-point shooters in the Women’s Korean Basketball League (WKBL).

During the 2019-20 season, the forward for Hana 1Q Women’s Basketball Team dominated the league in three-pointers, with a total of 66 and a success rate of 37.9 percent. Among domestic players, she also led the WKBL in scoring, averaging 16.85 points per game.

The 2019-20 season was the third straight year Kang topped the league in three-pointers.

She wasn't as dominant this season as she used to be, having gotten off to a slow start due to an injury in the beginning of the season.

But during Hana 1Q’s Dec. 2 game against Busan BNK Sum, Kang scored 20 points and 12 rebounds, thanks in part to three three-pointers, including the 500th of her career.

At 26 years and seven months old, Kang became the youngest player in the WKBL to reach that milestone.

The previous record was held by Kang A-jeong of Cheongju KB Stars, who netted her 500th three-pointer at the age of 27 years and six months.

“Back when I was a rookie, I was only waiting for the day where I could play in the starting lineup,” Kang said through a phone interview. “I didn’t even think of setting a record, not even in my dreams. Since these are also two different records [500 three-pointers and being the youngest] I’m honored.”

Kang wasn’t a strong three-point shooter during her rookie year. Standing at 1.80 meters (5 feet 11 inches), she was considered tall among Korean players and was considered good at mid-range shots.

But once she joined the pros, her height was no longer her strength, with plenty of stronger and taller foreign players who played center.

Hana 1Q’s head coach at the time, Park Jong-chun, responded by training her to improve on the accuracy of her three-pointers.

Her hard work eventually paid off. During the 2014-15 season, Kang topped the WKBL in three-pointers. Frequently hitting three-point baskets every time Hana 1Q needed one, she’s managed to get the job done and became known in the WKBL for her shots.

But it’s not only the WKBL.

During the final qualifier for the Tokyo Olympics in February in Serbia, Kang managed to score six of her seven three-point attempts, helping Team Korea earn an Olympic spot in women’s basketball for the first time in 12 years.

Following the qualifier, Kang also received a training invitation from the Washington Mystics of the WNBA.

On Oct. 24, during Hana 1Q’s game against Asan Woori Bank Wibee, Kang's 18 points helped Hana 1Q to a 68-65 victory. With the win, Hana 1Q finally managed to end their 28-game losing streak only to Woori Bank.

Despite her injury in the beginning of the season, as of 5 p.m. Sunday, Kang was ranked third in the WKBL in three-point shots, with 22, and is ranked fifth in success rate at 37.3 percent.

“I have pride in that when it comes to three-pointers, it’s Kang Lee-seul,” Kang said. “I want to continue to keep my title in three-pointers and want to set records in all the categories related to it.”

This season, she’s also improved her rebounds. As the WKBL decided to continue its league without any foreign player starting in the 2020-21 season, Kang has gotten more chances under the net.

She may still need to improve that skill, but she’s decided to continue her success in three-pointers and increase her rebounds this season.

“If I’m the team’s problem solver, then making three-pointers is a must,” Kang said. “So I would need strength in my game other than that. That’s why I chose rebounds.”

Since she was so used to throwing shots, when she actually got under the net to compete for the basketball, Kang quickly realized she wasn’t strong enough. In response, she’s been focusing on weight training, in addition to practicing rebounds for half an hour every day.

Yet for Kang, the team’s standing in the league remains a source of disappointment.

With a record of 3-7 in Hana’s 10 matches this season, they are ranked near the bottom of the league.

“Since I’m the team’s ace player, I feel a bigger responsibility [for the team’s struggle],” Kang said. “I hope my 500 three-pointers achievement can be a turning point. A third-place finish last season was our best finish since my debut. When [the fans think] Kang Lee-seul when it comes to three-pointers, I also want to add that Kang Lee-seul equals wins.”