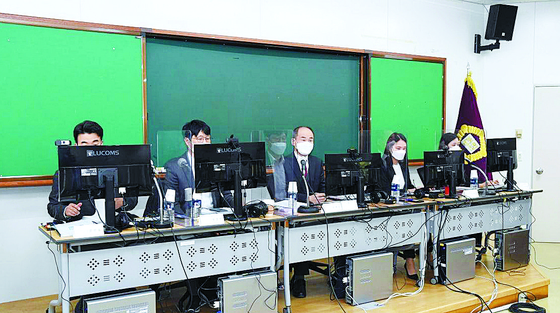 The National Conference of Judges is held remotely on Monday, with 120 judicial representatives participating in discussions of topics including the alleged surveillance of judges by the prosecution. [NATIONAL CONFERENCE OF JUDGES]


Judges from across the country convened for an internal meeting Monday that included discussions of allegations that the state prosecution service spied on individual judges to glean their political leanings.

A total of 120 judges, representing some 3,000 of their colleagues nationwide, participated remotely in the National Conference of Judges, which is typically held twice a year to discuss important matters pertaining to the judiciary.

But the otherwise obscure event garnered national attention this year after participants added the issue of prosecutorial surveillance to the meeting agenda at the last minute. The matter has been at the center of an ongoing clash between the Ministry of Justice and state prosecution agency.

The issue was one of several other accusations used by Justice Minister Choo Mi-ae last month as her reasons for suspending Prosecutor General Yoon Seok-youl from his duties, though an administrative court last week overturned that order.

The most prominent of the public charges made by the minister was that Yoon allegedly ordered the illegal surveillance of a judge assigned to a case involving former Justice Minister Cho Kuk, Choo’s immediate predecessor.

The report on the judge included notes about her membership in a prominent legal research group associated with liberal causes, something which the ministry claimed was an attempt by the state prosecution service to identify judges who would not be disposed to rule in its favor.

The Supreme Prosecutors' Office argued there was no breach of neutrality, and that the report was just a single-use document written up to justify continuing the case against Cho. A prosecutor assigned by the ministry to investigate Yoon also said her inquiry uncovered little cause to show Yoon had abused his power with the report.

Many judges, however, objected to those explanations, arguing that prosecutors’ access to and use of private information pertaining to judges threatens the independence of the judiciary.

Judge Jang Chang-guk, a member of the conference from the Jeju District Court, argued in an online forum for judges that the judiciary must look into how prosecutors were using information used in previous investigations of judges for their own purposes, and that “strong measures” be instituted to prevent such uses.

“I cannot find any legal basis to justify the collection and storage of private data by a public institution like the Supreme Prosecutors’ Office,” added Judge Lee Bong-soo of the Changwon District Court, in another post.

Judge Kim Sung-hoon, from the Seoul Central District Court, said the conference’s discussion of the matter did not infringe upon the independence and political neutrality of the judiciary, but instead contributed to the public good.

There were, however, dissenting opinions from other judges on the forum. Several contended that the conference should refrain from discussing such a politically sensitive matter, as doing so could misrepresent the principle of neutrality.

The outcome of the discussions were not yet known as of press time on Monday. Any consensus in the conference was expected to have a significant impact on Yoon’s embattled position.

The top prosecutor, however, has found several allies both within the political establishment in the opposition as well as in academia. Ten professors from Seoul National University on Monday issued a joint statement claiming the Justice Ministry’s recent actions to suspend Yoon presented an attempt by the administration to tame the prosecution to its will.