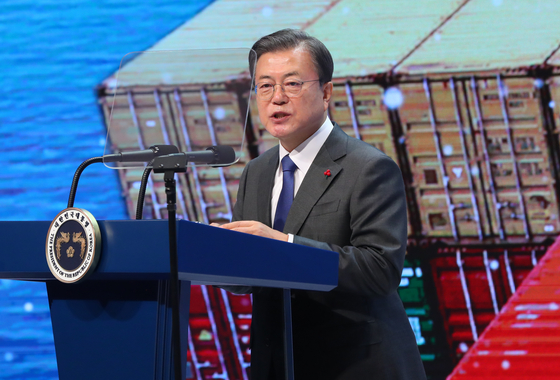 President Moon Jae-in delivers a speech on Tuesday at an event celebrating Trade Day at Coex in southern Seoul. [YONHAP]

“[The government] will keep on reviewing entry into the Cptpp,” the president said during an event marking the 57th anniversary of Trade Day.

The Cptpp is what remains of the Trans-Pacific Partnership (TPP), an ill-fated trade initiative pushed by the Barack Obama administration and abandoned by the Donald Trump administration in 2017.


Some member countries are also members of RCEP — such as Vietnam, Malaysia, Japan, Brunei and Singapore — which Korea signed last month.

Moon’s comment came as some analysts expect the incoming administration of U.S. President-elect Joe Biden will try to rebuild frayed ties with traditional Asian allies, potentially by joining the Cptpp.

In coping with China, the president-elect has said he wants to consult with allies in Asia and Europe "so we can develop a coherent strategy," according to The New York Times.


Membership in such FTAs, Moon said, could protect Korea from the whirlwinds of trade rows and protectionism.

“All countries will fiercely compete to take over the markets emerging out of the pandemic and protectionism will sweep across the world,” he said. “[Korea] should diversify its markets.”

The president went on to note that the administration will keep expanding free trade networks with a focus on Southeast Asia and northern neighbors including Russia.

“Beginning with the RCEP, [the government] will finalize FTAs with Indonesia and Israel within this year and will expedite ongoing negotiations with India, the Philippines, Cambodia and Uzbekistan,” he said.

Korea is discussing with China and Russia expanding the scope of bilateral FTAs to export even more K-pop content and other intellectual property.

Moon pledged to make the Central and Southern American regions a more important market for Korea.