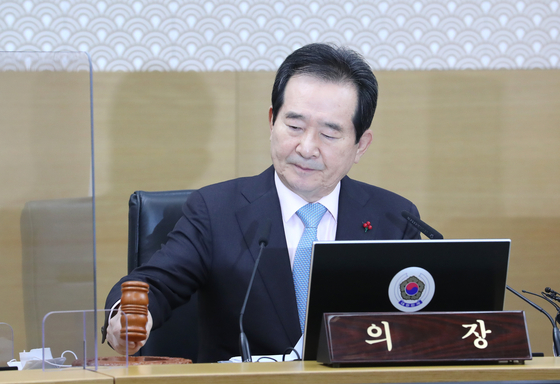 Chung Sye-kyun, Prime Minister, announces of frontloading 72 percent of next year's budget in the first half to fight the worsening Covid-19 situation at the government complex in Seoul on Tuesday. [YONHAP]

The government will front-load 72.4 percent of next year’s budget in the first six months as the worsening of the pandemic in recent weeks is not only affecting fourth quarter growth but could threaten next year’s recovery.

During a cabinet meeting head by Prime Minister Chung Sye-kyun, the government said it will allocate 333 trillion won ($307 billion) in the first half of next year.

While the National Assembly last week approved a 558-trillion-won budget for next year, which is an all-time record, when excluding the various government funds including the national pension, housing pension and public servant funds, the budget is about 459.9 trillion won.

Prime Minister Chung emphasized the urgency, asking government departments to make sure that the budget will be delivered precisely to areas that are in need at the right time on the first day of 2021.

“Next year’s budget has been set at 558 trillion won, an all-time record,” Chung said. “That’s 2.2 trillion won more than the government proposal […]. It’s the first time since 2010 that the budget total has been increased during a National Assembly review.”

Chung stressed that the budget was expanded so that the government would use it to overcome the pandemic crisis and strengthen the nation’s economic recovery.

“The government will meet this expectation through swift and effective budget execution,” Chung said.

The latest government report released on Tuesday indicated that finances are deteriorating. Spending continues to grow while taxes have been shrinking, resulting in a deficit expansion.

As spending have been mostly funded through government bonds, the national debt continues to break all-time records.

According to the Finance Ministry, as of October the government’s fiscal deficit expanded to 59 trillion won. That’s 47.6 trillion won more than a year ago. Last year, the deficit between January and October was 11.4 trillion won, more than a 400 percent increase.

When including as the four social insurances — the national pension fund, health insurance, employment insurance and work-related injury insurance — the deficit amounts to 90.6 trillion won, 45 trillion won more than a year ago.

In the first 10 months of this year, the government spent 468.5 trillion won, which is a 12.2 percent year-on-year increase.

Income only increased by 0.8 percent to 409.5 trillion won. Taxes accounted for 62 percent of the government income in the first 10 months of this year.

Debt has been piling on.

After breaking the 800-trillion-won threshold in September, the national debt further expanded to 812.9 trillion won.

Despite the government raising social distancing to Level 2 on Nov. 24, there has been little sign of the daily confirmed cases subsiding, which resulted in the government further tightening the regulations.

The number of businesses that are affected by the regulations that are getting tougher by the minute have been increasing, with major stores such as the iconic Japanese fast-fashion brand Uniqlo finally closing its branch in Myeong-dong, a tourist destination hard hit by Covid-19.

Even with the government’s stricter social distancing, the number of daily confirmed cases have remained around 500 or 600 in the last couple of days.