The author is a professor at Chung-Ang University Graduate School of Public Administration and former head of the National Assembly Budget Office.

Richard Thaler — the winner of the 2017 Noble Prize in economics who is famous as the author of the book “Nudge” — discussed the “house money effect” of how gamblers make reckless bets with the money earned in casinos. He shares Friedman’s point. A government’s budget is not ownerless but our money.

Ahead of the National Assembly inspection of government spending, the budget settlement committee started its review of the fiscal year 2020 from Monday. The biggest significance of settlement is not to repeat the same mistake and reflect the findings in next year’s budget. The average budget execution rate of the five years from 2016 to 2020 is 96.9 percent. It is important to execute planned budgets without setbacks. But the 2020 budget should be thoroughly reviewed as four supplementary budgets were added for the first time since 1961 to help overcome the Covid-19 crisis. Unnecessary spending is another name for unjust taxes.

The size of the 2022 budget is 604.4 trillion won ($521.7 billion), the first to go over 600 trillion won. In the review process, details of the spending must be thoroughly examined. Only the necessary budgets should be reflected by distinguishing whether it’s to revive the economy or to win voters’ hearts before the next presidential election on March 9.

The era of over 1,000-trillion-won national debt has begun. For how long should the country be run by issuing national debt that future generations must pay back? Sima Qian warned that if feathers pile up, it can make a ship sink. We must not forget the historic lesson that extreme imbalance of fiscal revenue and spending pushed empires off the cliff many times. 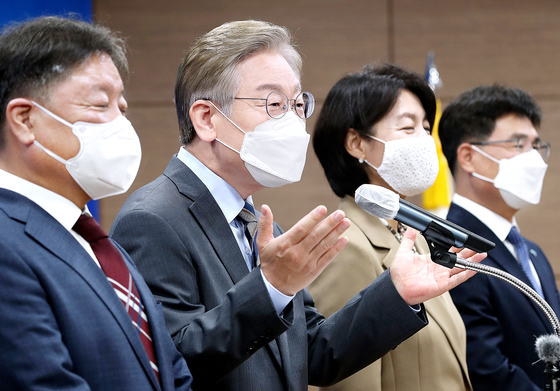 Gyeonggi Governor Lee Jae-myung, frontrunner among presidential candidates of the ruling Democratic Party, makes a promise for the development of the Gangwon province during his campaign Monday in the party’s primary race. [NEWS1]

As our national budget has expanded, I hope the government maintains its fiscal integrity for the country. The dignity and class that the state financing pursues is to have all citizens enjoy minimum dignity as a human. Dignity cannot be attained overnight or purchased at the market. Political leadership that can explain the vision of the state financing in detail and convince the people will be a critical variable determining dignity.

Politics exists to make a country wealthy and strong. The legislature and the government — major players of the budget market — must not abandon the ideal of optimal budget allocation. They must not become the spineless “fool in the shower” or encourage social waste with inconsistent policy of giving a left turn signal and making a right turn. It is just not right to pass the homework of tough fiscal management to the future generations after making policy mistakes and hefty spending.

The government and the legislative must assume the role of a catalyst to light the flame for the people who want to rise again by finding the right path for the money. Struggling to revive the British economy, Prime Minister Margaret Thatcher had kept the ten commandments of what not to do in her purse. You can’t be affluent without being frugal, you can’t get out of the problem if you spend more than you earn, and you can’t seek stability with borrowed money. Those are three of the ten commandments.