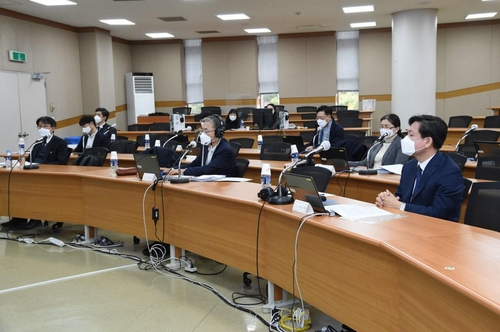 The National Conference of Judges is held remotely on Monday, with 120 judicial representatives participating in discussions of topics including the alleged surveillance of judges by the prosecution. [YONHAP]


Korea’s leading judicial conference on Monday resolved not to release a statement addressing allegations that the state prosecution service surveilled judges, after seven different proposals were shot down by a majority.

According to one representative among the 120 participants who participated in the National Conference of Judges, only around 20 voted in favor of a proposed statement saying the prosecution service’s collection and reporting of private information of judges threatened the independence of the judiciary.

After that proposal failed to garner a majority of 60 votes, advocates tried six more times to raise support for increasingly toned-down statements, but even the mildest of declarations only had a maximum support from 40 judges, according to the representative.

The aborted proposal effort revolved around controversial accusations leveled by the Ministry of Justice last month that prosecutors, at the behest of Prosecutor General Yoon Seok-youl, conducted unauthorized surveillance on a judge assigned to a case involving former Justice Minister Cho Kuk.

The report on the judge created by prosecutors included notes about her membership in a prominent legal research group associated with liberal causes, something which the ministry claimed was an attempt by the state prosecution service to identify judges who would not be disposed to rule in its favor.

Justice Minister Choo Mi-ae used the matter as one of several reasons to suspend Yoon from his duties last month, though an administrative court subsequently overturned that order.

The Supreme Prosecutors' Office argued there was no breach of neutrality, and that the report was just a single-use document written up to justify continuing the case against Cho.

Many judges objected to that explanation, arguing that prosecutors’ access to and use of private information pertaining to judges threatened their independence.

But the failure to reach a consensus in a body representing the nation’s 3,000 or so judges suggested these opinions belonged to a minority, said one district court judge.

According to another representative who took part, the meeting featured a fierce debate between opposing sides in the argument, with those in favor saying that silence on the part of the judiciary would convey the message that there was nothing wrong with what had happened.

Dissenting voices, which were particularly prominent among judges from the administrative court, argued that releasing a statement that would inevitably be critical of Yoon could breach the fairness of his trial originating from his suit against Choo’s suspension order. And others said the judiciary should avoid becoming embroiled in a highly politically charged issue that could undermine its own political neutrality.

Justice Minister Choo, who is a former judge herself, expressed her dismay at the outcome of the conference on her Facebook page on Tuesday.

“Nobody expects judges, who must defend the law, to take one side or the other, but their hesitation and concern nonetheless leave behind disappointment,” Choo wrote.

Though the judiciary has refrained from coming forward publicly on the issue, discussions about prosecutorial surveillance are likely to continue among judges for some time, given the strong opinions the matter has elicited among some members.

One senior district court judge warned against interpreting the judiciary’s reticence as a victory for the prosecution, saying the results of the conference don’t mean judges were pardoning Yoon and prosecutors for their actions.