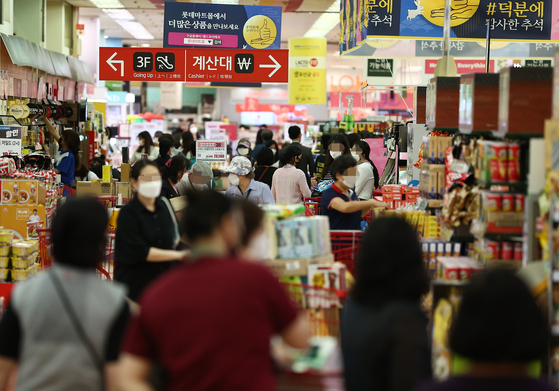 A big retailer in central Seoul is crowded with customers on Sept. 22. [YONHAP]

While large retailers are collecting less in commissions from client companies, online channels are taking more, with some seeming to gouge sellers desperate to move products.

According to the Fair Trade Commission (FTC), big retailers on average charged client companies 26.9 percent in commissions in 2018, but that declined to 20 percent last year. During the same period, commission rates for outlets and shopping malls decreased to 18.0 percent from 18.9 percent.

The commissions are paid to retailers or shopping malls by sellers in order to have access to the sales channel.

Online channels have been collecting more in commissions with the steady rise of online shopping.

Online shopping malls on average charged 13.1 percent in commissions in 2018, but that increased to 13.6 percent last year. During the same period, fees for TV home shopping rose to 33.9 percent from 33.7 percent.

Regarding the issue of unfair practices by large retailers, such as collecting additional fees for server usage or promotions, FTC said major retailers are doing quite well.

The rate of additional fees that retailers collect from their client companies last year declined.

Problems were noted online and on TV.

Some TV home shopping channels charged commissions and fees of up to 40 percent.

“Recently, online shopping malls have been shifting their financial burden to their client companies,” said Kwon Soon-guk, head of the FTC’s distribution division. “We will revise the guidelines for unfair behavior for online shopping malls in order to prevent them from charging an unreasonable amount of fees to their contracted businesses.”

“TV Home shopping channels also need to be examined whether they have been collecting additional fees unfairly.”

Retailers think outside the grocery box in bid to attract customers