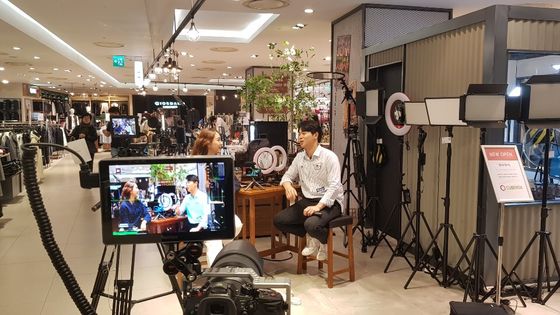 A live commerce show is filmed at a Lotte Department Store. [LOTTE SHOPPING]

Live commerce, a new retail trend that brings a traditional TV shopping channel into the live-streaming era, is growing in popularity as retailers look for new ways to connect with consumers.

Live commerce is similar to TV home shopping in that the host promotes products on a media channel, but it’s broadcast live online, allowing viewers to instantly communicate with the host by sending messages on platforms like YouTube Live.


Retailers try to lure viewers to watch the shows by offering benefits, like giving out freebies or offering free deliveries. They don’t just sell products in the live commerce videos, but also hold events that require active participation from viewers.

TMON was among the first Korean retail platform to try live commerce back in 2017. TMON's average number of viewers had risen 3,036 percent as of April since the first video was streamed in September 2017, according to the e-commerce operator.

“While home shopping targets middle-aged people who are in their 50s and above, [live commerce] targets those in their 20s to 40s,” said Choi Yang-hwan, a spokesperson for TMON. “With lower commission fees than television home shopping, vendors are able to record higher sales on live commerce.”

Live commerce isn’t a Korean sensation, but is also popular in China, where the heads of conglomerates have also got in on the act.

According to analyst Choi Won-seok from Shinhan Investment, the benefits of live commerce includes “real-time communications with vendor as well as other consumers” and “the simple transaction system.” 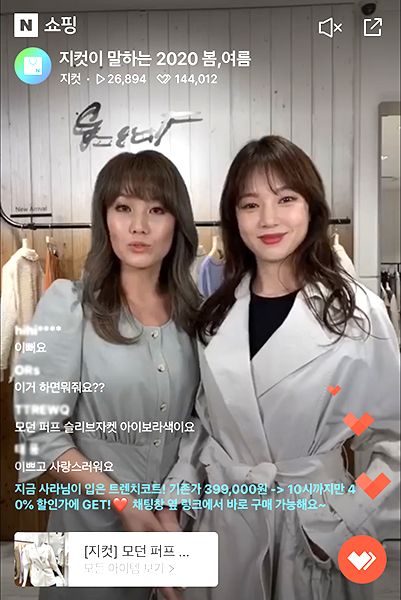 On top of e-commerce operators, traditional retailers like Lotte Shopping and Hyundai Department Store as well as IT companies Naver and Kakao have jumped into the live commerce business. Some are operating their own services, while others have formed partnerships with apps that provide live commerce services.

Lotte Shopping is one of the most eager participants.

Lotte Department Store live streams a video every day on Lotte On, an e-commerce app released in April.

Currently, women’s apparel and cosmetics products are the primary products sold through live commerce, but Lotte plans to expand the product categories and the affiliates that use the platform.

“We can’t reveal the sales of brands, but we can say that the response in general is positive,” said Oh Se-hoon, a spokesperson for Lotte Shopping. “There are several brands that we decided to sell through live commerce in response to viewers’ requests. Live commerce is part of the company’s effort to respond to the untact era following coronavirus.”

SSG.com refused to reveal how much it sold during the hour-long show, but said it had a total of 40,000 viewers.

The goal of the collaboration was to combine entertainment and shopping, which is of particular interest to consumers in their teens and 20s, according to SSG.com.

“Live commerce combines the strengths of different channels — home shopping and YouTube,” said Prof. Seo Yong-gu, who teaches business at Sookmyung Women’s University. “This has happened many times in history, as can be seen by discount marts, which combine the hygiene of department stores and freshness of food sold at traditional markets, and supermarkets, which combine discount marts’ food diversity and convenience stores’ high accessibility.”

The key to live commerce is offering quick responses, according to Choi from TMON.

“When consumers try to ask questions about products sold on home shopping channels, they have to make a phone call, which could take some time until somebody picks up the phone. Consumers have to go through a system to talk to somebody, while live commerce viewers can instantly ask questions and receive answers right on the spot — it is well suited for Koreans who usually don’t like waiting too long.”

Shinsegae established a subsidiary Mindmark in April. Specializing in digital content, the unit was established with the goal of producing media content, including live commerce shows, said Kim Jong-min, a spokesperson for Shinsegae Department Store.

In March, Naver opened the live-stream function to general vendors from influencers while Kakao initiated Kakao Shopping Live, a beta service for live commerce, last month. Pulmuone and fashion brand Fila are some of the companies that utilized the Kakao service.

Fila sneakers are sold on a Kakao Live Shopping event in May. [KAKAO]


Although some say the television era is coming to an end with the rise of mobile technology, home shopping operators argue that there is more that retailers can get from television than from mobile.

CJ O’Shopping is eyeing the live commerce trend, but said it doesn’t “yet perceive it as a threat.”

CJ O’Shopping has been operating its version of live commerce, “Shock Live,” since 2016. The company acknowledges that the sales incurred from mobile platforms are increasing, but the sales volume on television is still far greater.

“Although the influence of television has dwindled a lot, sales made from television account for around 50 percent of company sales,” said Choi Young-wan, a spokesperson for CJ ENM that operates the home shopping unit. “Also, sales from mobile aren’t always made purely via mobile because there are many times when people watch home shopping shows and then decide to purchase the same items online.”

Choi said the company is able to raise up to 2 billion won in an hour through TV sales, but not on mobile. “For us, it’s not easy to cut down the television service and raise the focus on mobile.”

Hyundai Department Store said the general response to live commerce is good, but agreed it’s just part of something new the retailer is pushing to diversify services in the post coronavirus era.

“Live commerce is one of the many new services Hyundai Department Store is offering,” said Shin Dong-hwan, a spokesperson for the retailer. “The response in general is good, but that doesn’t mean live commerce can completely replace the sales volume incurred from offline stores.”

Regardless, industry insiders say live commerce is a natural trend in the retail industry where growth has been triggered by the growing mobile age and the impact of coronavirus, which has made people avoid crowded locations.

The key to successful live commerce shows are impact and the ability to make people purchase.

“The ability of the host is also important, but offering some sort of impact to viewers is just as important,” said Kim Ha-eun, a spokesperson for SSG.com. “The dynamic movement of cameras and rapid transitions of scenes are important in drawing consumers in.”

Kim added, ”Providing coupons or displaying a banner that links to a purchase page is also essential, or the videos could just be consumed as entertainment content.”