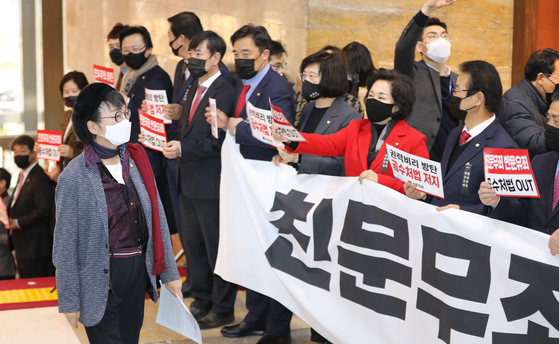 Rep. Kim Jin-ai, floor leader of the Open Democratic Party, a satellite party of the ruling Democratic Party, looks at the protest by members of the main opposition People Power Party (PPP) at the National Assembly on Wednesday, the last day of its regular session. In opposition to the passage of a bill to establish the Corruption Investigation Office of High-ranking Officials among others, the PPP members carried out a filibuster Wednesday. [YONHAP]


The opposition People Power Party (PPP) used the filibuster to delay the passage of three controversial bills at the National Assembly on Wednesday.

The legislation included a bill to establish the Corruption Investigation Office for High-ranking Officials (CIO), an amendment to limit the authority of the National Intelligence Service (NIS) to conduct antiespionage and anti-North investigations and an amendment to prohibit anti-Pyongyang leaflets from being distributed across the inter-Korean border.

The PPP and ruling Democratic Party (DP) had reached an agreement earlier in the day to pass less contested legislation first.

Those included an amendment to the Police Act, which established an office within the police agency tasked with some of the antiespionage investigations normally carried out solely by the NIS.

The DP had already scheduled a new session, set to begin on Thursday, during which it can again attempt to use its majority to pass the bills. A bill cannot be filibustered twice. Opening of the next session will ensure the bills filibustered are put to vote. The ruling party has the majority at the Assembly, with 174 seats out of 300.

The CIO, the first state organization to take over some powers of the prosecution, has long been a point of contention at the Assembly. It was originally slated to launch in July. The PPP, however, rejected the DP’s nominees for the agency’s first leader. Last month, the DP vowed to use its majority and change the law to neutralize the PPP’s rejection.

“With the way the ruling party has been brutally using its majority to pass bills, we cannot see how the CIO and its new head will keep to the basics of rule of law and neutrality,” PPP floor leader Joo Ho-young told YTN Radio earlier on Wednesday, adding that the PPP could start another filibuster in the next session. “We will show the people that the ruling party is pushing through the passage of bills by brutally wielding their majority power, instead of seeking a consensus."

DP's prosecution bill shenanigans denounced by some in DP