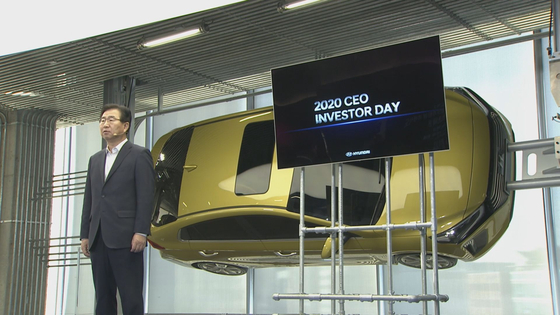 The Korean automaker pledged to invest 60.1 trillion won ($55 billion) from 2020 to 2025 in research and development and strategic investment in various business fields, spanning from internal combustion engine cars to electric vehicles powered by lithium-ion batteries or hydrogen fuel cells and even flying cars.

The investment amount has been toned down from 61.1 trillion won originally announced last year for the same time period, due to the coronavirus pandemic, the carmaker explained. 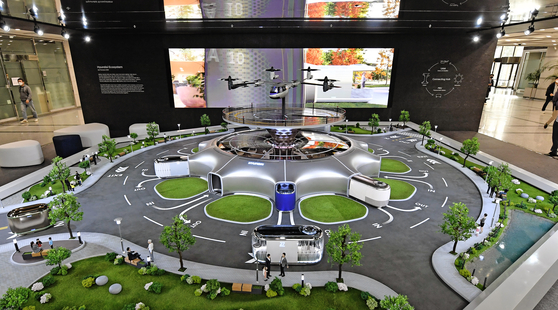 A mock-up of Hyundai Motor's vision in urban mobility set up at is Seoul headquarters. [HYUNDAI MOTOR]

Within the future mobility business, the amount allocated to hydrogen-related business has significantly increased from 0.6 trillion won to 4.1 trillion won.

The company reiterated the goal to have an 8 percent operating profit rate in the automotive sector by 2025.

The hydrogen business was once again at the forefront of Hyundai's plans, from just manufacturing vehicles powered by the eco-friendly energy to developing and manufacturing the fuel cell system as well. 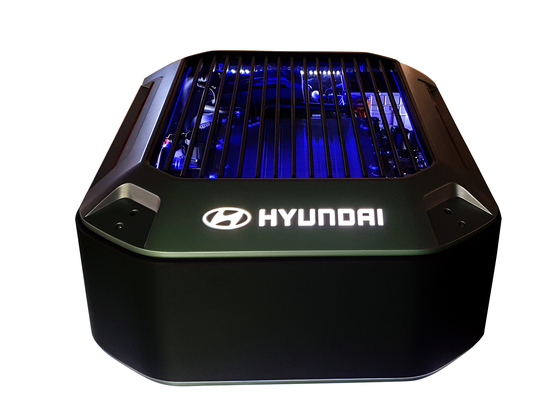 The carmaker on Thursday newly launched a brand dedicated to hydrogen fuel cell systems called HTWO, pronounced "H two," which the automaker says represents both the molecular structure of hydrogen and the union of two words starting with the letter H, hydrogen and humanity.

“Not only selling or sharing Hyundai Motor’s fuel cell system with other carmakers, we plan to develop it so that it can replace existing internal combustion engine system in ships, trains and urban air mobility," Hyundai Motor said in a statement.

Its flying car initiative, or what Hyundai Motor calls Urban Air Mobility (UAM), will also have a tangible output by 2026, the automaker said.

Hyundai said it will showcase an unmanned aircraft system for cargo topped with a hybrid powertrain in 2026, followed by an electric UAM model designed for urban operation by 2028. By 2030, the carmaker promised to launch a UAM that is able to connect cities.

“UAMs are not going to replace ground transportation,” said Shin Jai-won, who leads the UAM division at Hyundai Motor, during the online investor relations conference Thursday.

“Rather, it is going to augment society’s ability to meet the rapidly growing urban mobility needs by expanding the 2-D world to 3-D.”

Hyundai Motor said that the UAM market could be worth 1.5 trillion won by the 2040s.

Shin said the company is currently working on a hydrogen system that can power flying cars as well.


With the recent launch of its modular E-GMP system, an electric vehicle-dedicated platform that increases the efficiency of vehicle production, the company said it plans to take up 8 to 10 percent of the global EV market by 2040.

In terms of autonomous vehicles, Hyundai Motor said it plans to apply Level 3 self-driving technology, where the car navigates on its own without a driver’s hands on the steering wheel in certain situations, to its mass-produced vehicles by 2022.

By 2024, the carmaker said its vehicles will be able to park on their own, including moving short distances to meet the driver.