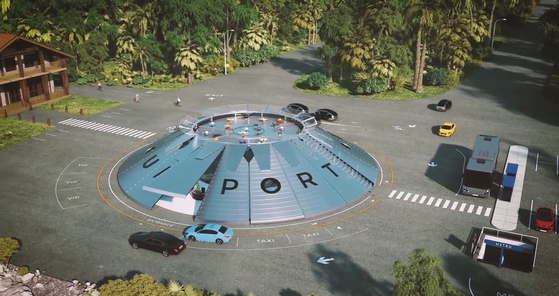 Hyundai Motor's urban air mobility (UAM) division said it will partner with Britain-based Urban-Air Port, a firm specializing in flying vehicles, to develop the facility. Hyundai Motor previously said it would invest $1.5 billion to develop private planes and hubs for UAM in the next five years. The joint project is part of that initiative.

The infrastructure the two companies are building will include hubs that are needed for passengers and cargo as well as public transportation transfer systems. The hubs serve as terminals that bridge land mobility with air mobility.

This collaboration was led by Pamela Cohn, the vice president of global strategy and operations within the division.

Cohn, who has background and expertise in aerospace and national defense infrastructure, was hired by Hyundai Motor in January.

Urban-Air Port builds vertiports, which are vertical landing sites for flying vehicles. The company says that compared to the average helicopter landing pad, vertiports cost less and are about 60 percent smaller. They can also be built in narrow spaces and by using modular materials

The pilot project for UAM infrastructure will also include life-size vertiports. The companies have already signed memorandums of understanding with two English cities, West Midlands and Coventry. After the pilot project, they plan to branch out further into Europe and other countries.

Urban-Air Port CEO Ricky Sandhu said the partnership will focus on gathering manufacturers of planes that are capable of vertical landing, passenger and cargo services and digital infrastructure.

“The UAM division is aiming to build human-centered mobility through innovation. Through this project, we hope to get a step closer to our goal,” said Shin Jai-won, an executive vice president who is the head of the division.

Hyundai Motor presented its blueprint for its UAM initiative in January during CES 2020, an annual international consumer electronics convention in Las Vegas.

By forging a strategic alliance with Uber, Hyundai Motor decided to test fly ‘S-A1,’ a private plane, in the United States in 2023.

“Hyundai Motor manufactures cars, but there will be 50 percent cars, 30 percent private planes and 20 percent robotics in the future,” said Hyundai Motor Executive Vice Chairman Euisun Chung during last October’s town hall meeting. “We will transform into a company that offers mobility services in that landscape.”

Hyundai Motor has been ramping up its talent recruitment for future mobility endeavors, bringing in Shin last September, who previously led aviation research and development at NASA.