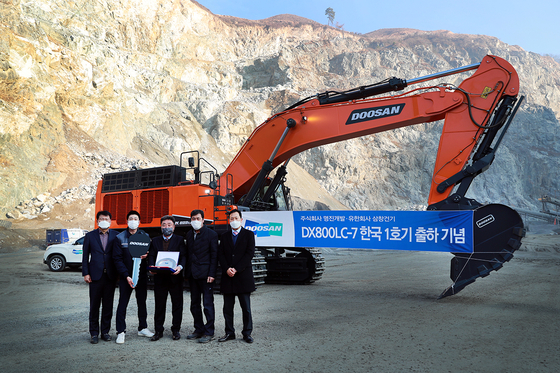 A Doosan Infracore’s excavator that was delivered to a buyer in Chungju, North Gyeongsang, last month. [YONHAP]


Doosan Heavy, which owns 35.4 percent shares in Doosan Infracore, announced in a regulatory filing Thursday that it would sell all its shares to a consortium led by HHI Holdings.

The consortium consists of HHI Holdings and KDB Investment, a subsidiary of the state-run Korea Development Bank.

The sale is part of the cash-strapped Doosan Heavy’s efforts to secure liquidity.

Neither Doosan Group nor HHI Holdings confirmed the amount the consortium submitted for the bid or the exact date the acquisition will take place. But HHI Holdings is believed to have offered around 800 billion won ($735 million), according to local media reports. This is lower than the initial estimate of 800 billion to a trillion won for the deal.

Being named the preferred bidder does not mean the deal is final, according to a spokesperson for Doosan Group. GS Construction, which was seen as a strong candidate, did not take part in a bid last month, but said it will observe the process of the deal, implying it could take part somehow in the future.

HHI Holdings was seen as a strong candidate due to the synergy effect it could generate with its subsidiary Hyundai Construction Equipment, which is Korea’s No. 2 construction equipment maker after Doosan Infracore.

Doosan Infracore, the world's ninth largest construction equipment manufacturer, commands 3.3 percent of the world’s market, while Hyundai Construction Equipment ranks a distant 22nd with 1.2 percent market share, according to data by KHL Group, a supplier of international construction information based in Britain.

Since March, Doosan Group has been trying to sell assets to pay off debts of 3 trillion won to its creditors — the KDB and the Export-Import Bank of Korea. Unloading Doosan Tower in central Seoul was one way of getting liquidity.