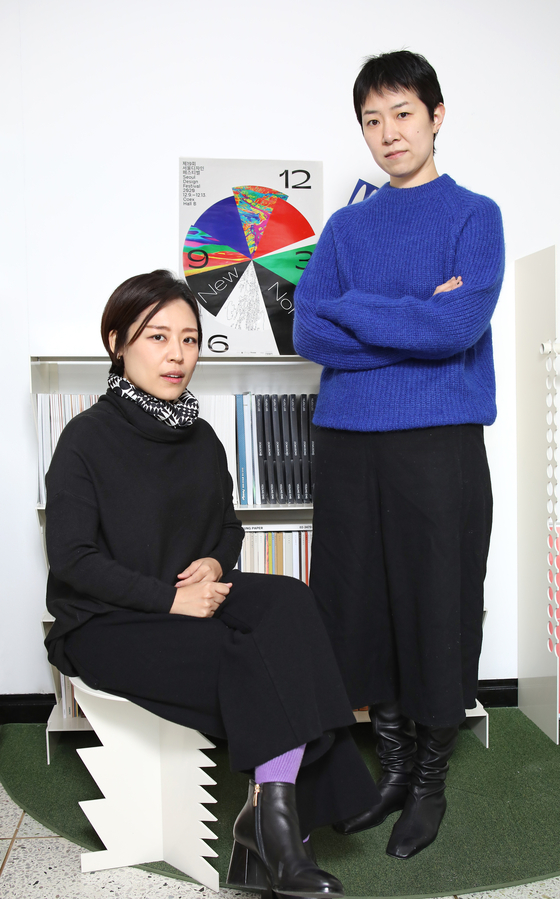 
Meet tomorrow's design at the 19th Seoul Design Festival presented by local designers who have reflected on the "new normal" we are living in through their latest designs. 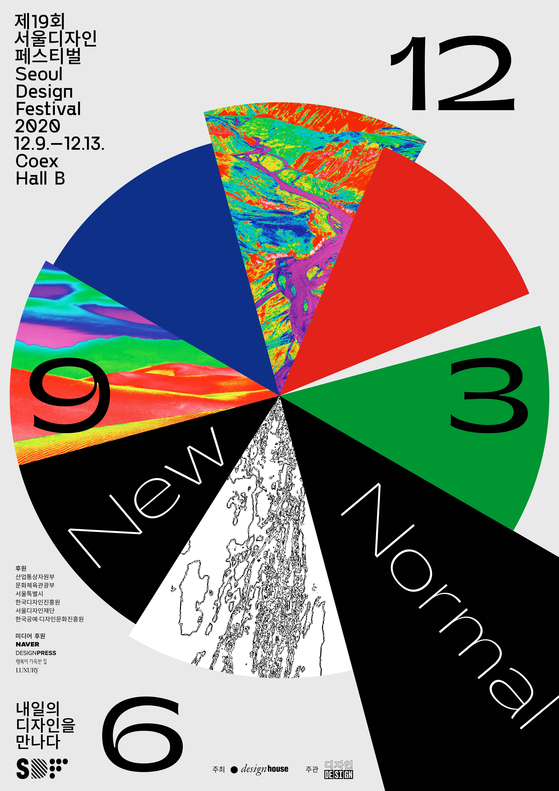 Designhouse launched its first Seoul Design Festival in 2002 to discover and promote competent new designers in Korea and strengthen the design competitiveness of domestic brands.

Over the past 18 years, the annual festival has promoted 1,850 design brands, 4,730 new designers and accumulated 1.13 million visitors to build its image as a representative venue to exchange creative design ideas.

After graphic designer Lee Ye-jou of Yesung ENG and print artist Choi Kyung-joo of the printing label "Artist Proof" were announced as the art directors of the year last month, the Korea JoongAng Daily sat down with directors Lee and Choi to discuss the 19th Seoul Design Festival’s slogan, “Meet Tomorrow’s Design.” The following are edited excerpts from the interview.


Have you two participated in the previous Seoul Design Festivals?
Lee: Unlike Choi, who is taking part for the first time, it’s my second time participating in this festival. Three years ago, I helped graphic designer Na Kim, who was the art director for the 2017 Seoul Design Festival, so I knew how big the festival is. Knowing the scale of the event and the amount of the workload, there was a lot of pressure in the beginning.


Why did you choose "New Normal" as the keywords for this year's festival?
Lee: Under this year’s slogan “Meet Tomorrow’s Design,” we both agreed that the “new normal” brought on by the Covid-19 pandemic is beyond a mere trend or an issue — it’s the reality that we are living in. I thought it was the right time to address the new normal in design, so I came up with keywords that can express the changed lifestyle. 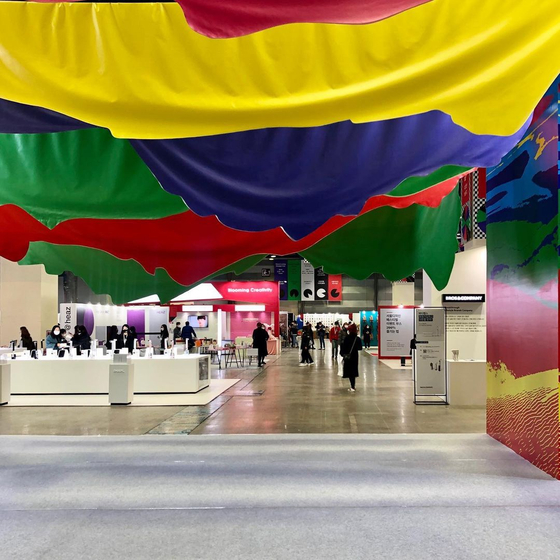 What were your roles as co-art directors?
Lee: I came up with the key visuals of the festival, which are used in promotional posters, and are also applied on goods. We incorporated three items — a clock, thermogram and pixel — into the design to illustrate the new normal. The clock serves as an intuitive element to explain the new normal we live in. We utilized thermal videos, which we face whenever we enter a building to take our temperatures using thermal imaging cameras, and the pixel, which is the smallest unit of a picture used in digital imaging that we see every day in the untact era. 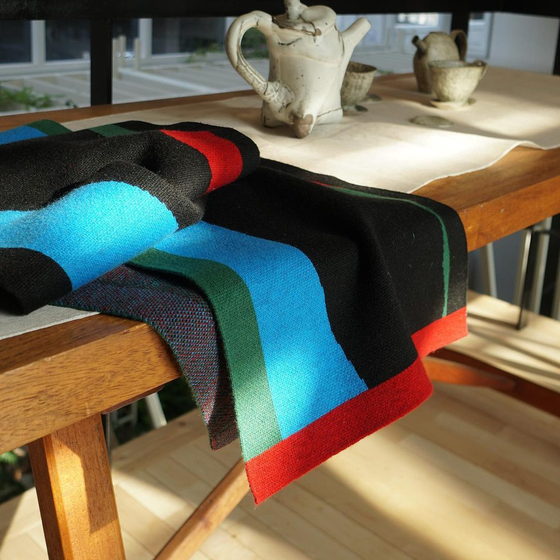 Choi: Based on the key visuals that Lee designed, I planned out the inner space of the exhibition hall with designer Kim Min-su, an interior designer who runs his design label called post-standards. I also made a signature scarf derived from the key visual in collaboration with Studio Ohyukyoung. 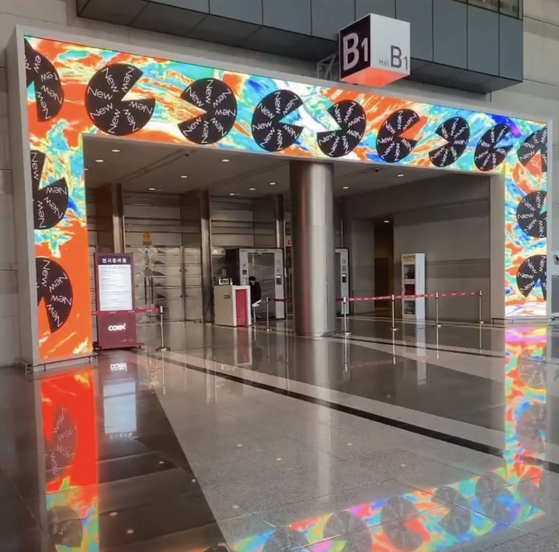 The motion poster for the 19th Seoul Design Festival is displayed at the entrance of Coex Hall B. [SEOUL DESIGN FESTIVAL]

Does “Tomorrow’s Design” incorporate more technology than previous years?
Lee: We collaborated with design engineering company, Tissue Office, to deliver our message more clearly by making a motion poster for the festival. In the motion poster, it’s easier to visualize the key visual as a thermogram and the pixel move inside the clock. The large screen at the entrance of Coex Hall B, where the festival is being held, plays the video that we created. It creates a fun experience for visitors to visualize what the exhibition will be about. 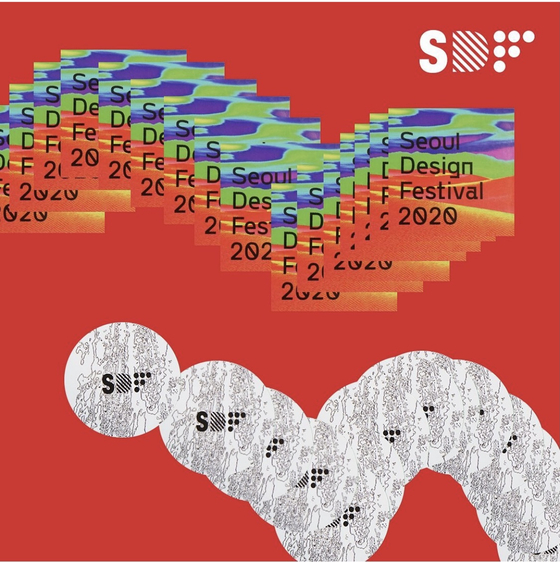 As an art director, how did you follow this year’s trends?
Choi: There is nothing better than working with others in different fields to know what’s trending. Collaborating with fashion brands especially guides me on what people are leaning toward these days. Recently I collaborated with women’s clothing brand IT MICHAA, and socks brand Socks Appeal. Past collaboration projects with furniture companies, art galleries, museums and publishing companies also guided me naturally on what is trending.


Where did you get your inspiration from?
Lee: I worked on a project called “Domusong” for five years, which utilizes scrap paper. Through the project, I reinterpreted printed material from a graphic designer's point of view into a visual language. As I continued this project for five years, I got to think about other possibilities that could be applied to everyday objects, furniture and space. I think I get inspiration when I meet others in different fields and discover new possibilities. Building new relationships and listening to them helps me come up with new ideas.
Choi: Lee’s tendency to get ideas from external factors may be the characteristic of a designer who is more connected to societal factors. I don’t think I get much inspiration from external factors — Instead, I get inspirations from my own thoughts. Maybe it is because I am not a designer, but a print artist.


What are you planning on doing after the festival is over?
Lee: A series of collaboration works will come out that I have worked on with furniture designers, fashion designers and commercial brands.
Choi: I recently collaborated with composer Lee Min-hwi and drummer Seo Kyung-soo to form a project group named "Cubed," after I was told that my art is like a piece of sheet music. We’ve been working on a project to make an album called "Imaginary Scheme" and we are going to perform at the Mullae Art Factory sponsored by the Seoul Cultural Foundation on Dec. 12. Composer Lee and drummer Seo will perform on a stage that I designed. The digital album is already available on various music streaming sites, and the physical LP will be released in January.


How do you want the festival to be remembered?
Choi: We tried to come up with goods that can be used in daily life such as a scarf and stickers, and provide an iconic space that won’t be forgettable. Despite the hardship we are all going through amid the pandemic, we hope to present a sense of joy to the visitors through the exhibition.

To prevent the spread of Covid-19, the Seoul Design Festival will keep a limit of 500 people at a time. The festival will run until Sunday at Coex Hall B in southern Seoul. Tickets cost 12,000 won ($11) and the exhibition opens from 10:30 a.m. to 7 p.m. until Saturday, and from 10:30 a.m. to 6 p.m. on Sunday. A virtual tour is also available through the Seoul Design Festival’s official Instagram account (@designfestival.kr). Last admission is one hour before closing. Visit https://seoul.designfestival.co.kr for more information.