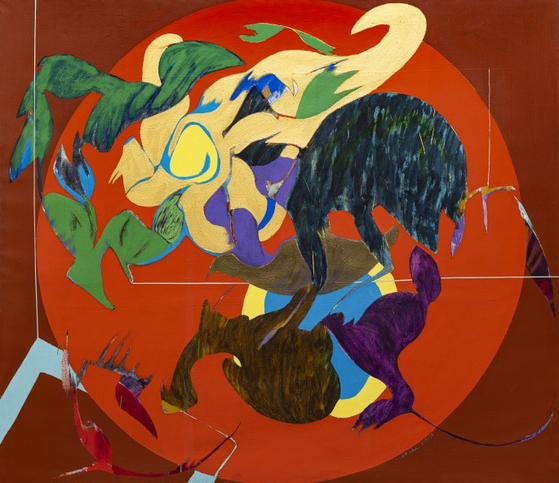 
Choi Wook-kyung (1940-1985), one of the leading female artists of Korean abstract art, likened her life abroad to the children's novel “Alice in Wonderland.”

Like Alice, Choi also embarked on an adventure into her own wonderland of America, according to curator Jeon Yu-shin.

At the National Museum of Modern and Contemporary Art (MMCA) Gwacheon, a retrospective exhibition of the late Choi, titled “Wook-kyung Choi, Alice’s Cat” reflects on Choi’s artworks from the 1960s until her death. It is a comprehensive overview of her own personal experiences that are fused into her artworks, using daring colors and lively brushstrokes. In addition to her paintings, poems and research papers by Choi are on display as she was also a poet and an art professor. 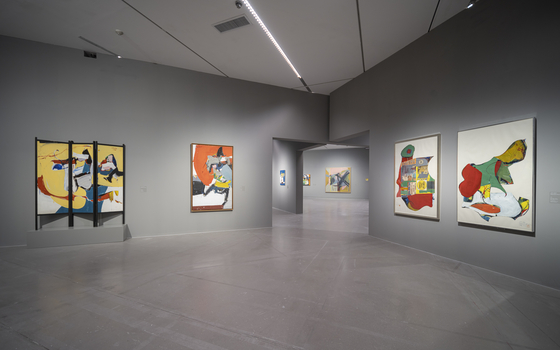 A view of the exhibition of ″Wook-kyung Choi, Alice's Cat″ [NATIONAL MUSEUM OF MODERN AND CONTEMPORARY ART]


The first, and probably the most prominent piece in the exhibition is “Alice, Fragments of Memory” (1965). Choi inserted many elements from “Alice’s Adventures in Wonderland” (1865) into her artwork, such as a scribble of the word "Alice" in yellow and worn-out playing cards, representing the artist’s deep interest in the children’s novel written by Lewis Carroll.

According to curator Jeon during a press event at MMCA Gwacheon held on Oct. 27, Choi thought of her experiences studying in America as “shocking to the roots,” as she was unfamiliar with the language and the cultural differences. Like how Alice gets lost, both physically and mentally, in wonderland, Choi also went through an identity crisis during her time in America.


Her artworks, especially those that were made during her time in America in the 1970s, represent an intermediate place between Korea and America, where reality and dreams meet. Paintings, such as “Tightrope Walking” (1977), are associated with intertwining figures like birds, flowers and mountains, which are frolicking and dancing in a surreal environment, pulsating with life. In the particular aforementioned piece, Choi was inspired by the landscape of New Mexico, where she took part in an art program, and of course, “Alice’s Adventures in Wonderland.”

In a poem she wrote in 1972, “My Name Is,” Choi calls herself a “nameless child” because she was at first unable to speak the English language. Choi wrote that she had been called “a child with big eyes,” “a mute child” and “a lost child.” This poem is part of a collection of 45 poems titled, “Like Unfamiliar Faces.” 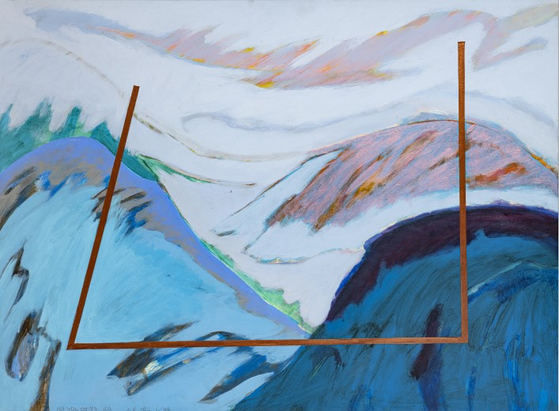 
In the 1980s, art experts originally defined Choi as “an artist of pessimism” who “tragically died young” at the age of only 45. She was also stigmatized as “unfeminine” because she was a “small lady who drew the largest paintings in Korea.” Recently, however, many are wondering if such criticisms were belittling of Choi’s artistic abilities.

“[This exhibition] provides an opportunity to revisit and reinterpret Choi’s artworks,” Youn Bum-mo, director of the MMCA, told press the same day.

“Wook-kyung Choi, Alice’s Cat” continues until Feb. 13 next year. The MMCA Gwacheon, located in Gyeonggi, is open from 10 a.m. to 6 p.m. every day except Mondays. The exhibition is free to all.