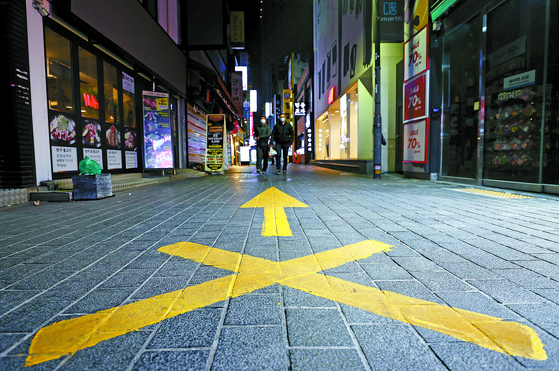 The empty streets of Myeong-dong in Jung District. [YONHAP]

Three young chefs who recently opened a restaurant in October have had to adjust their business model to something they'd never envisioned when coming up with the concept for their new spot — doing delivery.

With the number of new daily infections of the coronavirus much higher than when they opened a mere few months ago and the government enforcing stricter social distancing measures at Level 2.5, the newly debuted restaurateurs of Sate in Haebangchon of central Seoul's Yongsan District have been forced to offer their fare to customers dining at home.

"Cooking deliverable food was never on our agenda, but since we have to survive right now, we decided to do this," said Sate's sous-chef Park Byeong-chang. "This is a new market and we hope this can help us cultivate our names to bring in more people to the restaurant when things get better later."

Since they consider themselves professional chefs, they are doing more than just delivering the dishes they already serve at their restaurant by thinking about how home diners can get the best quality food when the dishes have to travel between 20 to 30 minutes in a bag after they have been prepared at the restaurant. 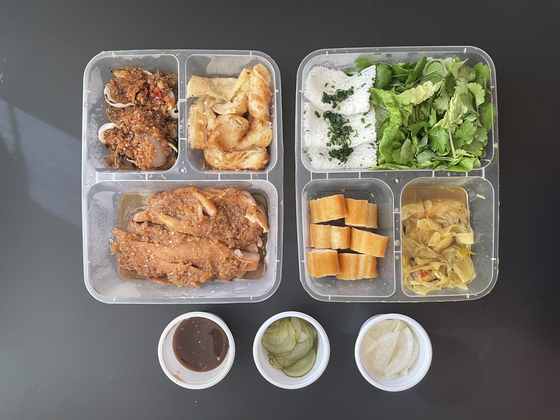 They've stopped using butter in any sauces for delivery items as it can congeal in the time it takes to reach customers and have also tried to stay away from fish, which continues to cook in the takeout containers and can end up on diners' tables with an undesirable texture.

With all restaurants in Seoul forced to shut at 9 p.m. until the end of the month due to strengthened social distancing measures enforced by the government, many eateries that only opened for dinner service are now offering a lunch menu, one of the easiest shifts they can make with their already existing resources. 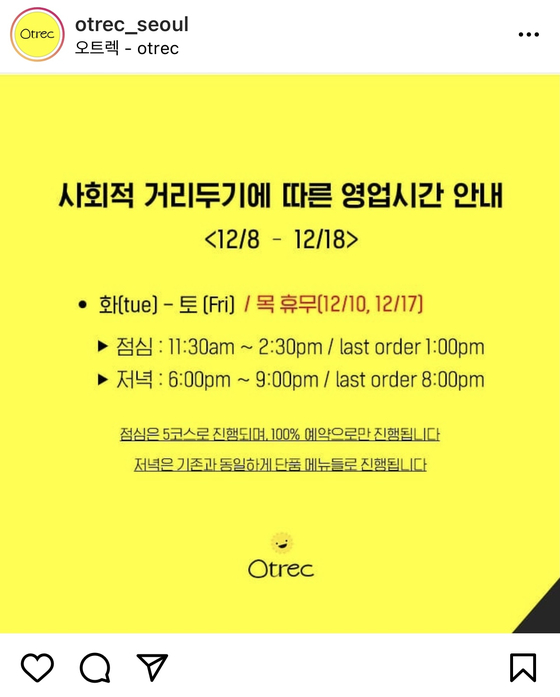 A notice is posted by restaurant Otrec in Euljiro, Jung district, saying it is opening its doors for lunch. [SCREEN CAPTURE]

Wine bar Scuro in the Garosu-gil area of southern Seoul's Gangnam District and Otrec in Euljiro of central Seoul's Jung District are just some of the spots joining the new trend of temporarily opening their doors for lunch, along with restaurant Dexter in Cheongdam that's located in Gangnam District, which opens for lunch only on weekends.

Bar Big Lights in central Seoul's Hannam-dong is not only opening for lunch from Dec. 16, but will also unveil a one-person menu with a selection of wines by the glass. Those who come alone can order anything on the existing menu but in a smaller size. The bar, which doesn't usually offer any wine by the glass to guests, decided to make the change to cater to those choosing to dine alone.

As well as restaurants, cafes and bakeries have also been hit particularly hard by the social distancing guidelines which rule that customers can only avail of takeout orders.

While restaurants are rolling up sleeves to put their products in boxes for delivery via outlets like Coupang and Baedal Minjok, not that many cafes are active about taking such an option as the delivery fee would likely cost customers more than the drink itself. Instead, some cafes are turning to brunch as authorities say once food is being served, customers have the option of dining in.

However, because the restrictions under Level 2.5 don't include all the details on what steps individual restaurateurs are allowed to take to ensure they can keep running their businesses, inquiries are flooding into the Seoul Metropolitan Government. In response, the office's food policy division has decided to allow cafes that make 80 percent of their sales from food to call themselves brunch cafes and continue operating. The number, which was decided over the weekend, applies only to restaurants in Seoul from Dec. 8.

"We understand many are confused with the new measures and there have been many complaints from cafe owners about why cafes are the only outlets that cannot accept guests," said a manager at Seoul city government's food and policy division.

"Because the number of those being infected isn't falling at the moment, we cannot apply a more relaxed analysis to read between the lines of what's stated under the guidelines of Level 2.5 right now, as that goes against [keeping things safe]."

But for some cafes, brunch is not an option. Hell Café, with three branches in Seoul, is struggling to make even a third of the sales it used to see under the new social distancing measures. This particular spot is known for its selection of specialty coffee drinks that are only available for guests who are staying in, as the drinks are best displayed in certain mugs, glasses and cups that are not designed for takeout. While all the menu is now available to go, owner Michi Lim says he doesn't want to make any compromises with his drinks, as they won't taste as good.

"I see that it's urgent to do something, but don't think it is fair or makes sense," said Lim. "If this continues to happen, I can see us going out of business by May."

Others have chosen to simply shut their doors until the social distancing guidelines are lifted. Pastry shop Quelquechose in Daechi-dong, southern Seoul, has decided to shut up shop for now and only do overnight delivery. It chose to do so to save anyone from having to travel to the shop for its sweet treats and to keep its employees safe by limiting their interactions with customers.

"We are starting with macarons and plan to add more baked goods soon, but if the situation continues, we will consider making more diverse items fit for overnight delivery," said Kang Suk-gi, owner of Quequechose. 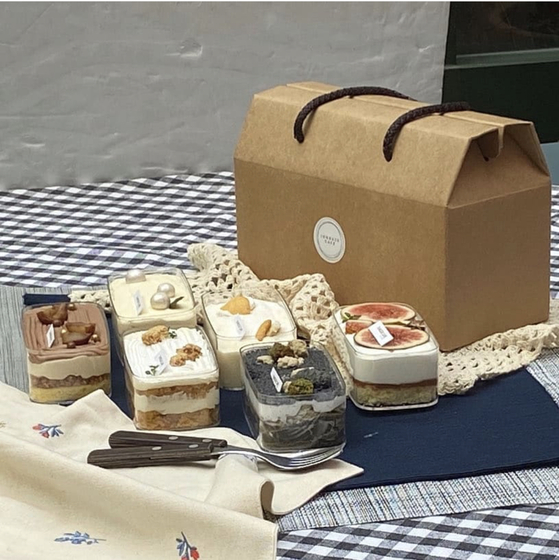 Dessert in a cup is being offered by Jungsik Cafe in Cheongdam, Gangnam District, and is now available for delivery. [SCREEN CAPTURE]

Other shops like Cedrat and Jungsik Cafe in southern Seoul's Gangnam District, are trying cake delivery. Jungsik Cafe, a casual outlet of two Michelin-starred restaurant Jungsik in the same building, created a layered cake in a plastic cup so that it's easier to pack up and deliver.

Bars, which would usually open their doors in the evening, have had to open much earlier under the guidelines, while some have chosen to sell some of the syrups or ingredients to customers to make their cocktails at home. Well-known cocktail bar Bar Charm in Seochon, central Seoul's Jongno District, alongside its sister bar Pomme, opens at 2 p.m. Pomme has also made apple and lime cordials and is selling them with recipes on how to make tasty drinks at home.

"It is difficult for many business owners and we are not saying that they should just put up with business declining, but right now is the time to think more about the citizens' right to stay healthy," said a manager at the city government.