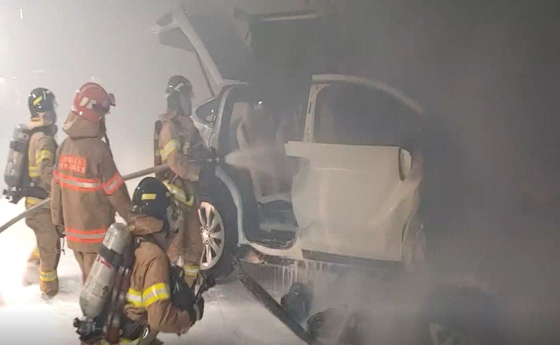 
Police are investigating the fatal conflagration of a Tesla Model X that killed its owner and injured two others in an underground parking garage in Seoul.

The Model X crashed into the wall of the parking garage of an apartment complex in Yongsan District, central Seoul, then caught fire, on Wednesday. This led to the burning death of the car's owner, who was in the passenger seat.

The driver, who escaped with injuries, claimed “the car suddenly got out of control," raising the possibility of a sudden unintended acceleration as the cause of the accident, according to police.

It is unusual for a car slowly winding its way through a parking garage to suddenly smash into a wall and result in the death of a passenger. The police will ask the National Forensic Service to try to determine the cause of the accident.

Some experts asked about the case suggested that the Tesla’s autopilot function could have played a role.

“It is more likely that the car’s autopilot feature malfunctioned or the driver’s misunderstanding of the system caused the accident, instead of a sudden unintended acceleration,” said Kim Pil-soo, a professor at Daelim University College department of automotive engineering, who observed the accident site. “If the car was powered by an internal combustion engine, the fire could have been more easily extinguished. But since it was an electric car, it was harder to stop the fire.”

When an electric car battery catches fire, a so-called thermal runaway can occur in which chemical energy stored in the battery is converted into thermal energy and may result in explosions.

Kim said that Model X’s falcon wing doors — which open upwards — and automatic pop-up door handles may have been obstacles in rescuing the owner in the passenger seat.

“Falcon wing doors are hard to open when the car is badly crushed,” Kim said. “Pop-up handles also make [rescue] difficult as they don’t work when the power is out.”

When the accident occurred, a staffer of the parking garage tried to save the owner but couldn't open the passenger seat door. Fire fighters who arrived at the scene later also failed to do so. It took 25 minutes for the rescue team to take the car owner out through the trunk. It was already too late to save the car owner’s life. The parking garage staffer was taken to the hospital due to injuries he sustained in the rescue attempt.

“There are cases where top-notch technology in cars meant to assist drivers turn out to cause tragedy,” an auto industry source who asked for anonymity said. “An increasing number of electric cars are being released with complex driver assistance features, but there are not enough guidelines outlining how we should deal with such features in accident situations.”

Tesla said it has "nothing to [say] for now" about the accident.