Meet the paleontologist who's following in the footsteps of Korea's dinosaurs

Meet the paleontologist who's following in the footsteps of Korea's dinosaurs 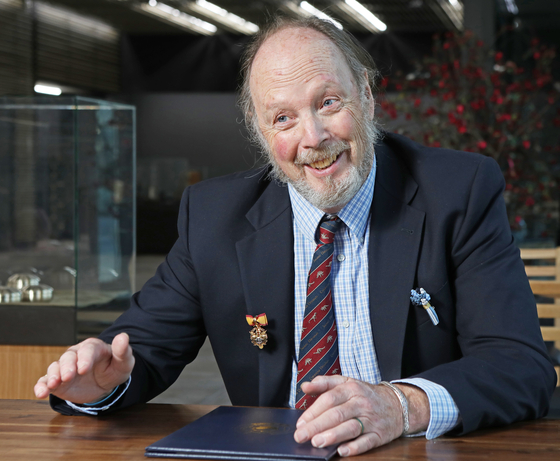 Paleontologist Martin Lockley, who is a professor emeritus at the University of Colorado in Denver, speaks with the Korea JoongAng Daily on Dec. 8. [PARK SANG-MOON]


When people hear someone is a paleontologist, they usually think the person studies dinosaur bones. But similar to medical doctors, paleontologists also have an area they focus on, and that wasn’t bones for Martin Lockley, a professor emeritus of geology at the University of Colorado at Denver.

Lockley may have the dream job of every 7-year-old. Studying dinosaurs for him means following in their footsteps. It's a track that not many paleontologists took when Lockley was studying, making him a pioneer in the field.

This 70-year-old pioneer has been visiting Korea almost every year since 1987.

It may come as a surprise to those who are not a fan of dinosaurs, but Korea is in fact the “best place in the world to discover dinosaur footprints, mainly the footprints from the Cretaceous period — not just the late Cretaceous, but the whole period from the early to the end," said Lockley. (There are three time periods in the age of dinosaurs; the Triassic, Jurassic, and Cretaceous.)

Since the discovery of the first dinosaur footprints in 1982, the number of track sites have been continuously increasing, making Korea a treasure trove of Cretaceous dinosaur track sites.

Over the course of the past 38 years, many of the world’s first discoveries have been made here, drawing global attention.

At the center of these firsts was Lockley, who worked closely with his Korean colleagues including Kim Kyung-soo, a paleontology professor at Chinju National University of Education and vertebrate paleontologist Lim Jong-deock, who is also the director of the restoration technology division at the National Research Institute of Cultural Heritage, to identify and investigate vast tracks left by vertebrates of the Cretaceous period and promote the value of Korea’s vast fossil sites on the southern coast. 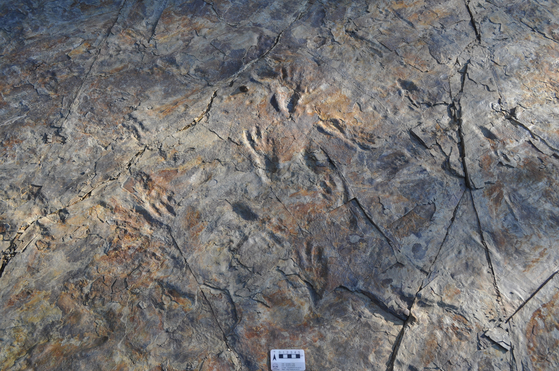 Footprints of a bipedal crocodile found in the Jinju Formation in Sacheon, South Gyeongsang. It became the first footprint evidence that ancestors of modern-day crocodiles walked on two legs. [CHINJU NATIONAL UNIVERSITY OF EDUCATION]


Their latest feat is the surprising discovery of more than 100-million-year-old footprints belonging to a large prehistoric ancestor of modern crocodiles that moved about on only two feet. The findings were published in June in the prestigious journal Scientific Reports.

On Dec.8, Lockley received the Presidential Citation from the Korean government in recognition of his more than three decades of contribution in researching and publishing unprecedented findings in top-class science journals. According to the Cultural Heritage Administration, Lockley is the second non-Korean national to receive such an honor since the presidential commendation in the field of Korean heritages began in 2004.

To attend the ceremony, which was held at the Korea Cultural Heritage Foundation headquarters in Samseong-dong in southern Seoul, Lockley flew in from Denver and went through a two-week quarantine.

“It was not that difficult to do the two weeks of quarantine, because I love Korea,” said Lockley in an interview with the Korea JoongAng Daily on Dec. 8, prior to receiving the citation. The following are edited excerpts from the interview. 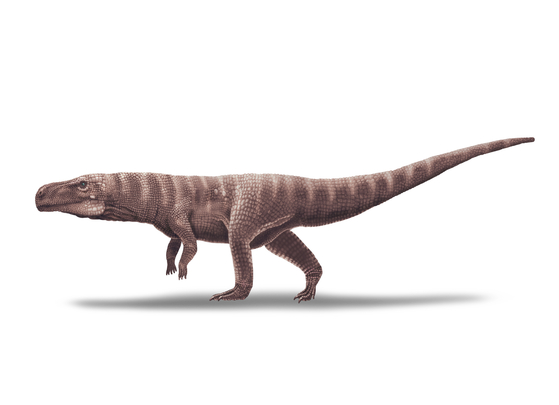 Reconstruction of a bipedal crocodile relative from the Early Cretaceous that left tracks in the Jinju Formation in Sacheon, South Gyeongsang. [CHINJU NATIONAL UNIVERSITY OF EDUCATION]


Q. Back in 1987, when you first visited Korea after hearing about some dinosaur track discoveries, did you imagine Korea would turn out to be such a treasure trove?

A. When Korea discovered its first dinosaur footprint in 1982, I was just beginning my research in Colorado and I heard about the discovery. So on my visit to China for a conference in 1987, I visited Korea, which was actually my first trip to east Asia. During that time it was just the beginning. Then it just kept growing that as a dinosaur tracker, I had to keep coming back, every year.

I didn’t expect it to be this amazing. After observing the sites around Samcheonpo, I quickly realized that it will have very abundant dinosaur tracks, but when more tracks got discovered following large development projects in other regions such as Jinju, it just got so interesting. 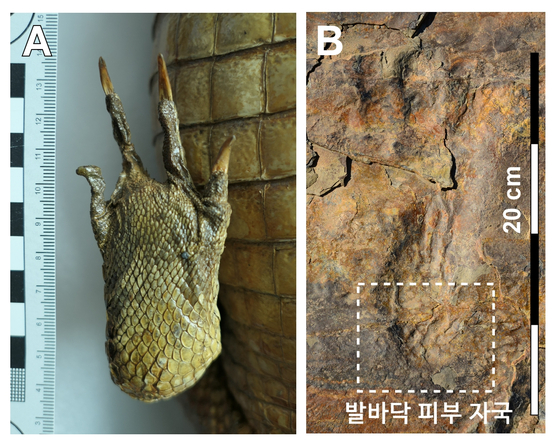 Skin impressions left on the footprint of the bipedal crocodile, right, being compared with a modern-day crocodile's skin pattern, left. [CHINJU NATIONAL UNIVERSITY OF EDUCATION]


Q. Is it correct that Jinju Formation is where the most recent discovery of the world’s first bipedal crocodile tracks was made?

We searched everywhere but we couldn’t find the front footprints. The footprints were also long, about 25 centimeters [9.8 inches], which meant that they were very large as well. You know, nobody expected such large bipedal crocs. The Jinju Formation is so rich in tracks that you can read the entire ecology.


Q. Why is Korea’s southern coastal region so rich in dinosaur tracks?

A. There are multiple reasons. During the Cretaceous period, it is believed that the region that is now the southern part of the Korea, was what geologists call a "back arc basin" with large lakes behind a volcanic arc. The lakes created large muddy substrates suitable for making tracks. So a lot of ving organisms during the Cretaceous period dwelled in the southern coastal region of Korea.

We also believe that the weather was great. The distinction between the rainy season and the non-rainy season was clear and the humidity was just the right amount to leave so many traces.


Q. As far as I know, Korea has many tracks but a relatively lesser number of skeletons. Why?

A. Some people don’t realize that it’s possible to find tracks of an animal and not the skeleton. It’s also possible to find the skeleton and not the tracks. Even though Korea is the best place in the world for early Cretaceous fossil footprints, it has very, very few skeletons. In all of Korea, we have probably already documented more than 50,000 footprints. But do you know how many dinosaur skeletons? Just two dinosaur skeletons, and those are even incomplete. There’s only half a skeleton of one dinosaur and half of the other. And there’s no feet.

This is a joke among paleontologists. When bone hunters find a skeleton and ask us trackers if we can find the tracks like Cinderella, we ask "Can you show me the feet" and they so often reply, "Sorry no feet, only the head."

It means that it’s relatively easier to find tracks than the skeletons because every animal has one skeleton but it can leave so many footprints during its lifetime. Moreover, when an animal dies, the first bones to be lost to erosion are the small ones like feet and the hands. Many dinosaurs or animals, when they die, small bones are lost, and what remains are the spines and then the big bones like the arms and legs.

Korea has relatively less discoveries of dinosaur skeletons also because it had no natural disasters. No dinosaurs had died after a heavy rainfall or big earthquakes here.


Q. Korea attempted to enlist the southern areas with abundant dinosaur tracks on Unesco’s World Heritage Site in 2009, but it got withdrawn. But that was before many of the world’s first discoveries. What are the chances now?

A. Back then, when we proposed the inscription, it included five fossil sites. They were Boseong, Haenam, Hwasun and Yeosu in South Jeolla and Goseong in South Gyeongsang. That was before we discovered the Jinju Formation. Jinju sites came later into the map because of a large development project by the government to turn Jinju into a so-called innovation city. As the bulldozers began pushing aside dirt and cut mountains, we found great fossil sites that now became natural monuments of Korea.

By adding such new sites, I believe it increases the value at an international level. Moreover, together with our Korean colleagues, we were able to publish the discoveries in higher quality journals like the Scientific Reports. Some people still think that tracks are not as important as the discoveries of bones or skeletons. But we’ll continue to push our discoveries and report them at a higher level to make sure the Korean Cretaceous Dinosaur Coast gets Unesco’s World Heritage inscription in the near future. 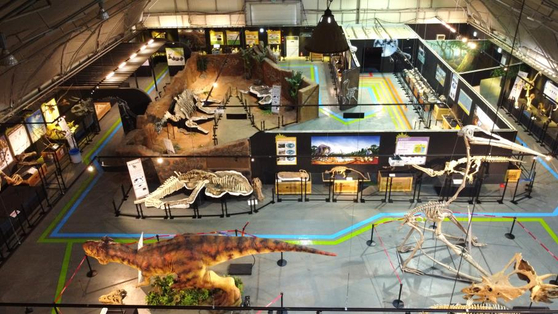 The Gyeongnam Goseong Dinosaur World Expo will be held next year at the Danghangpo Tourism Zone. [YONHAP]

Q. How well is Korea doing with preserving such sites?

A. There are disagreements between environmentalists, scientists like myself and conservationists, and developers. Frictions are inevitable. We understand that developers have to think about money and time. For the Jinju Innovation City for example, it was important for the government and the developers to quickly push ahead with this innovation city project. Then there were fossil discoveries and the development project was halted and paleontologists were called in.

Fortunately, the Korean law mandates the development project is stopped, to allow scientific study. But it does make developers and politicians upset. But I believe, as a scientist, even the developer who may have been angry with the delay of the development, his or her children or grandchildren will go to the museum that’s created for the next generation and that is heritage. Look at the Jinju Pterosaur Tracks Museum, which has opened to preserve one of the vast track sites discovered during the development project there. There were some disagreements, but it's all forgotten; and now, it’s being visited by so many people, and it’s educational.