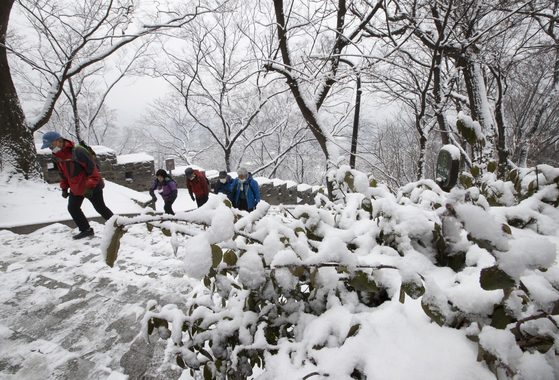 Snow covers Nam Mountain in central Seoul on Sunday as hikers trail up the mountain. [NEWS1]


Seoul residents woke up to the season’s first snow Sunday morning, which blanketed much of the capital area and central part of the peninsula.

A cold weather advisory was issued for Seoul, Gyeonggi and Gangwon by the Korea Meteorological Administration (KMA) amid estimates that Seoul and Gyeonggi were expected to receive somewhere around two to seven centimeters of snowfall until late Sunday evening.

Parts of Gangwon could receive up to 10 centimeters, the state weather agency said.

The temperature is likely to drop by at least five degrees Celsius (41 degrees Fahrenheit), which could make Monday the coldest day of the year so far, with temperatures in Seoul forecasted to dip below minus 10 degrees Celsius, according to the KMA.

KMA authorities warned citizens going to work on Monday to prepare for a frosty trip, warning of slippery roads and sidewalks.

Strong winds are expected to take the temperature with wind chill down to around minus 15 degrees Celsius, officials said. A strong wind advisory was issued throughout the country save for Jeju Island, with estimates of wind speeds ranging between 10 to 16 meters per second (22 to 36 miles per hour).

A heavy snow advisory was briefly issued for the greater capital area, but was retracted at around 1 p.m. Sunday after snowfall was less than the five centimeters necessary to keep the warning in place.

With the temperature due to drop precipitously through the night, the Seoul Metropolitan Government Sunday set up a disaster prevention and safety headquarters to supply emergency aid to the city’s most vulnerable.

According to authorities, temporary lodging will be provided for a total of 743 homeless people in the city, while residents of the city’s shantytowns will be given wintertime emergency supplies like food and bedding.

A total of 24,000 volunteers and city officials will visit the elderly aged over 65 living in shantytowns to conduct regular health checks on a daily basis. Authorities plan to check on such elderly citizens’ welfare through phone calls and visits.
Patrols will also be set up in places like tunnels, parks and public bathrooms to help any potential homeless citizens, the city officials said.

“Everyone is having a tough winter due to Covid-19, but we will do our best to ensure we spend the winter safely and warmly,” said Han Jei-hyun, assistant mayor and chief of the city’s safety-related policies.