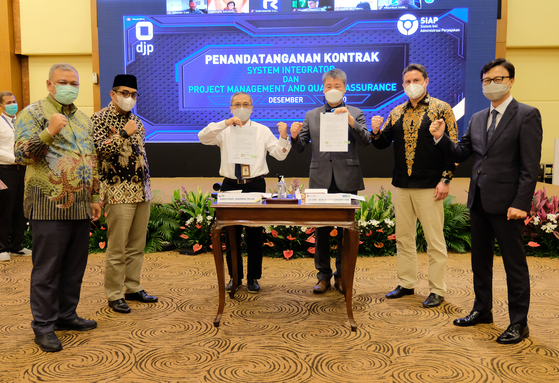 Representatives of LG CNS and Indonesia's tax agency pose after signing an agreement to build a digitized tax system for the latter. [LG CNS]


LG CNS won an order worth 100 billion won ($92 million) from Indonesia to build a digital infrastructure for tax collections.

The system will be used by 42 million taxpayers and 32,000 officials in the Southeast Asian country, and is one of the largest contracts signed by the Korean IT service company.

Pulling together technologies including cloud computing and big data analytics, the system is scheduled to be launched in 2024.

LG CNS is responsible for combining a fragmented tax collection system and connecting it to the government’s fiscal statistics.

The unit said that its experience of building Korea’s tax collection platform and other sites run by National Tax Service helped win the contract, adding that the head of the Korean tax agency wrote a letter of recommendation for its bid.

CNS went into the business of setting up Indonesia's fiscal information systems in 2015.

Six other competitors from different countries made bids.

The deal could help other small- and medium-sized IT enterprises collaborate with LG CNS to sort out raw data.

The company has seen an upturn in profitability as the demand for cloud and artificial intelligence-based services are on the rise.

Its net profit jumped 7.3 percent to 42.8 billion won in the third quarter compared to the same period last year.