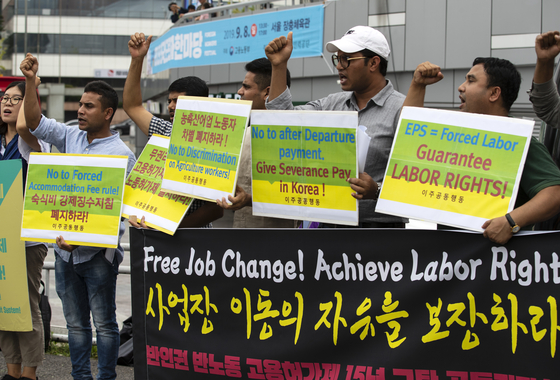 Migrant workers protest against work permits that limit their choices to work under other employers in Seoul 2019. [YONHAP]

The government has decided to relax regulations on migrant workers returning to Korea who may have been abused by their former employers.

Additionally, the government will provide a monthly allowance of up to 500,000 won ($460) for six months to job seekers considered to be in a vulnerable situation, which includes people from low-income households and women trying to re-enter the workforce after taking a long career break to raise a family.

These measures from the Ministry of Employment and Labor were approved during a cabinet meeting headed by President Moon Jae-in on Tuesday.

Under current regulations, that permit was only given to migrant workers that had worked at the same company for the entire period.

If they moved to another company, the privilege was revoked.

The ministry in a statement said it decided to relax the re-entry conditions to prevent migrant workers being exposed to unjust treatments by their Korean employers.

The move follows a series of recent reports showing migrant workers made to endure unjust treatment including forced labor, physical or mental abuse and in some cases sexual harassment and assault by employers that had complete control over the worker's ability to stay in Korea.


The ministry also added that for some businesses, the tough restrictions on re-entry limited opportunities to hire skilled migrant workers just because they had changed company.

Additionally, the government has decided to not revoke the re-entry privilege even if the migrant worker moves to a completely different field of work, if that worker was forced to make the change because their employer was abusive.

The government has also decided to shorten the waiting period for migrant workers looking to re-enter the country from the current three months to just one month.

When leaving the country after four years and 10 months, the migrant worker previously had to wait three months before returning to Korea.

The government has decided to reduce this waiting period as a three month absence could seriously affect the the business operation of the company that the worker is employed by.

These changes for migrant workers will be implemented from June next year.

The government also announced the details of the maximum 500,000 won subsidy to be given to job seekers that are in vulnerable positions.

In order to be eligible for the subsidy, the applicant’s income must be less than 50 percent of the national median. Additionally, the total assets of their household have to be 300 million won or less.


The applicant must turn in a job-seeking plan and will be required to act on it, including through government vocational training.