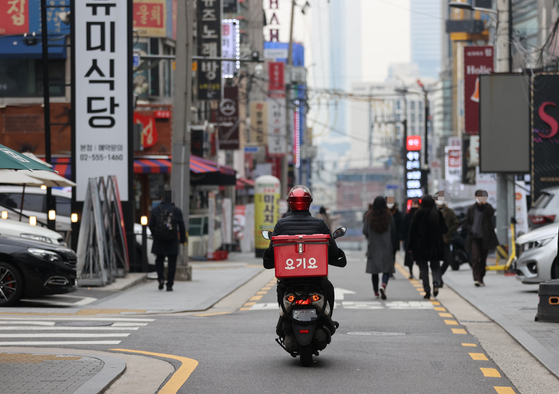 A Yogiyo delivery worker delivering lunch in Gangnam District, southern Seoul, on Dec. 10. Delivery workers have increased as more people are placing orders via food delivery platforms such as Yogiyo or Baemin. Yet their job security has remained unstable, prompting the government to take action in improving platform worker's rights. [YONHAP]


To address mushrooming problems with delivery services, especially overwork and injuries to drivers, companies will have to start registering with the government.

The new requirement could go into effect as early as the first half of next year.

“Currently anyone can establish a delivery service company without any restriction, and because of that there have been limits to protecting delivery staff,” said Employment and Labor Minister Lee Jae-kap during a press briefing held on Monday.

The government also said it will help so-called gig workers — people who work for online platforms of many types, including delivery services — to set up a cooperative like the Korean Teachers’ Credit Union or the Military Mutual Aid Association where workers' interests are addressed.

Platform workers is a term for people who work in services provided via either smartphone apps or websites. Platform workers are involved in a wide range of jobs from transport, such as Uber drivers, to coding and delivery services such as Baedal Minjok, commonly known as Baemin.

The government is starting to address protection of platform workers as their numbers grow, especially during the Covid-19 pandemic.

Protections of such workers have been weak, the government noted.

“The manner of employment is diverse for platform workers,” said Lee at the press briefing held Monday. “Some are even miscategorized as self-employed.”

The minister noted that many platform workers are not protected by labor laws, making them vulnerable in many situations including getting compensation for work-related injuries.

The Employment and Labor Ministry said Monday that platform workers as of November this year were estimated to number 1.79 million in Korea. That’s 7.9 percent of people that are employed in the country.

Among the 220,000 who work in location-based platform jobs for companies like Uber and Baemin, nearly half entered the field due to Covid-19.

In a statement released Monday, the Korean Confederation of Trade Unions claimed that the government’s effort to create separate legislation for platform workers means that it will not regulate major platform companies under the existing laws.

The nation’s largest umbrella labor union argued that the government is accepting a distorted form of employment practiced by platform giants.