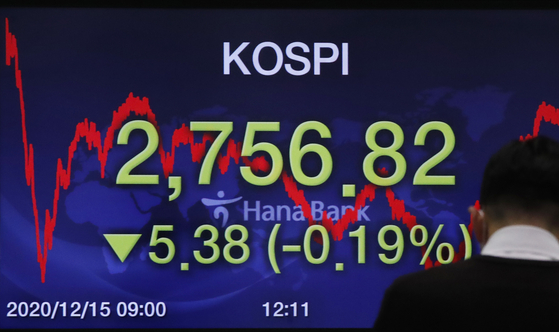 A screen shows the final figure for the Kospi in a trading room of Hana Bank in Jung District, central Seoul, on Tuesday. [NEWS1]


Korean stocks slumped for the second consecutive session Tuesday, as investors sought to cash in part of recent gains amid spiking virus cases. The won fell against the dollar.

Market heavyweights came under pressure from foreign and institutional selling.

"Despite the overnight reports on U.S. vaccinations, the Kospi was weighed down by increasing pressure from the Covid-19 outbreaks," Hana Financial & Investment analyst Lee Young-gon said.

In addition, analysts said investors are testing the waters ahead of the next U.S. Federal Open Market Committee (FOMC) meeting, set for Tuesday and Wednesday, for any positive note for the financial markets.

The local currency closed at 1,093.3 won per dollar, up 1.5 won from the previous session's close.