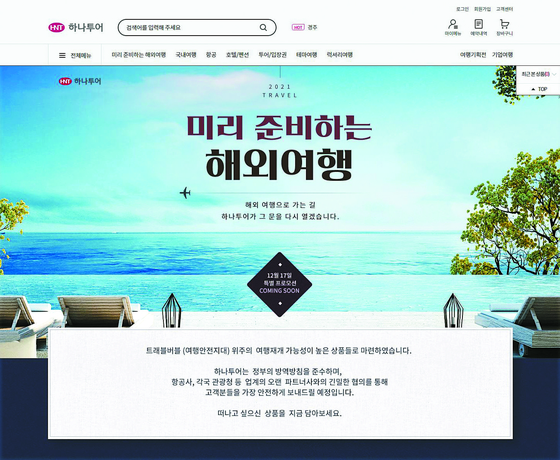 The website of Hanatour that advertises its new overseas travel package. [SCREEN CAPTURE]

It is offering two options for those with cabin fever. But each comes with a major catch.

In its “Overseas trip you can leave right away,” you can jet off on to any one of five destinations without a ban on visitors: Maldives, Turkey, Switzerland, Cancun and Dubai. But when you return, you will need to isolate for two weeks at home.

Dubai and Maldives do require a negative PCR test result issued within 96 hours of departure for all visitors from Korea. Turkey, Mexico and Switzerland don't require them.

The nine-to-14-day travel packages are scheduled to depart next month.

“As the two-week quarantine issue is less likely to be solved until the departure date, we are going to accept customers who have a positive stance on quarantine process,” said a spokesperson for Hanatour.

The other package, which is called “Planning overseas trips in advance,” has no schedule yet — it will be set according to the future spread of the virus. Customers are allowed to make advance reservations starting in May. The deposit of the package will be priced at 2,021 won ($1.85), for the year 2021.

If the trips are canceled due to the coronavirus issue, people who made the reservations will get a full refund.

Hanatour offers a safety travel checklist through its mobile app that allows people to make sure they are ready for departure.

The company offers various overseas tour options: Japan and Hong Kong are scheduled to depart in March; Europe and the United States after June; and Southeast Asia in April. Customers who wished to make reservations in advance only had to pay 10,000 won — about one-tenth of a regular deposit.

The packages attracted more than 100,000 people in only two weeks, according to the company.

Travel agencies flooded with customers are short on staff