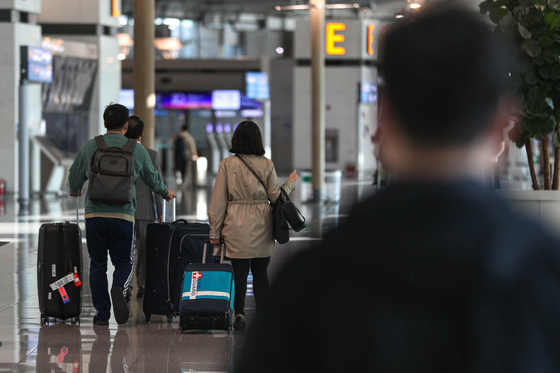 A person looks at a flight information display at Incheon International Airport’s Terminal 1 on Nov. 2 [NEWS1]


Air travel is starting to return to normal as routes are being opened to accommodate travel-bubble travelers.

In October, outbound international passenger numbers were up 49.7 percent on year at Incheon International Airport, though the total is still down about 95 percent from October 2019.

Overseas ticket purchases on WeMakePrice jumped 790 percent Oct. 1 through Oct. 25 compared to the same period in the previous month. Around 90 percent of bookings were for this year.

In the past, people booked flights well ahead of the planned trip, according to WeMakePrice.

Saipan, Singapore and Thailand are some of the popular destinations.

Korea signed a travel bubble agreement, a quarantine-free travel partnership, with Saipan in June, and with Singapore in October. The agreements became effective in July for Saipan, and will be effective on Nov. 15 for Singapore. Starting this month, Thailand eased entry regulations for travelers from 63 countries, including Korea. Vaccinated travelers from the countries can enter Thailand by air and quarantine for only one night to await Covid-19 test results.

“Three thousand people signed up for travel packages heading to Turkey and Spain in a week during a promotion we offered late last month,” said Yook Hyun-woo, a spokesperson for ModeTour Network, adding that around 4,000 bookings were arranged by the company for November and December.

“Before the Covid-19 outbreak, we had around 100,000 bookings per month, so the number we are seeing is still very insignificant. But we believe that the fact the demand started to rise from almost zero for two years is very meaningful. It’s just a start,” Yook added.

Along with the demand, airlines are also reopening routes and increasing frequencies.

Asiana Airlines said Monday that it will increase the number of flights to Singapore later this month.

The airline currently flies to Singapore three times weekly, on Tuesday, Wednesday and Friday. Starting on Nov. 15, Asiana Airlines will fly four times a week, and five times a week starting in December.

It resumed flights to Sydney on Nov. 9, and to Auckland on Nov. 2.

Korean Air Lines operated chartered flights to Sydney and Auckland during the Covid-19 pandemic, but the carrier suspended scheduled services to these destinations in March last year.

Along with the expectations for the travel industry to recover, shares of related companies jumped over the past several months.

“Though the number of reservations for travel packages rose recently, a lot of times people cancel the tour at the last minute,” said Hur Chan, a spokesperson for HanaTour Service.