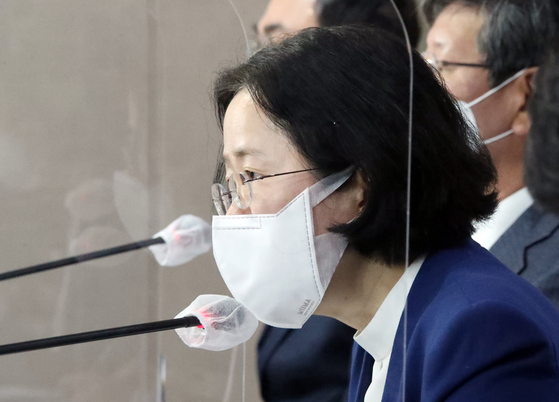 
The government strongly defended the so-called “fair economy” bills that were rammed through a week ago by the ruling Democratic Party, which holds a clear majority in the National Assembly.

It emphasized that the laws help level the playing field while “effectively” restraining groups from abusing their “unfair” power.

The FTC chairwoman said that the fair economy is the “foundation for an innovative and inclusive nation, which the current government is aiming for” as well as for sustainable economic growth.

“Especially, the improvement in the corporate governance structure and the establishment of a fair market order resolves problems regarding power dynamics,” Joh said.

The FTC chief said the reformed legislation will not only improve credibility of Korean businesses but will also contribute to revitalizing the market.

“Ultimately, it will contribute to strengthening our economy’s competitiveness,” Joh said.

The three laws amended by the bills — the Commercial Act, the Fair Trade Act and the Financial Group Supervision Act — have been targeted by the Moon Jae-in administration since it started in 2017.

The legislative changes include limiting the voting rights of the largest stakeholder in a company when appointing an auditor, allowing minority shareholders to sue board members of a subsidiary and implementing stronger penalties on illegal transactions between related companies.

The Justice Ministry and the Financial Services Commission participated in the press briefing, the goal of which was to speak to a business community irked by the tightened regulations.

The business community remained silent at the briefing, but last week it blasted the amendments as they were passed, arguing that these regulations will hold back management while exposing them to threats.

During the press briefing, the FTC chief said the government will strengthen its implementation of the law against the growing online platform operators such as Google, Naver and Baedal Minjok if they abuse their market dominance.

The government is planning to submit early next year legislation that would regulate online platform operators.