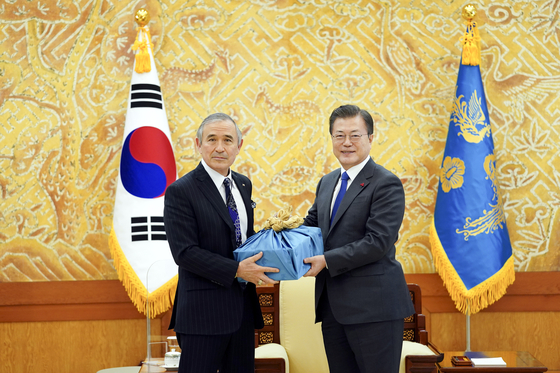 
Harry Harris, the outgoing U.S. ambassador to South Korea, said in a virtual forum Tuesday that “hope alone” will not resolve the North Korea denuclearization problem, while underscoring the importance of joint military exercises between Seoul and Washington.

"While we hope for diplomacy with North Korea to be successful, we all can recognize that hope alone is not a course of action,” said Harris in a speech at the 8th ROK-U.S. Alliance Forum, held virtually by the Korea-U.S. Alliance Foundation and the Korea Defense Veterans Association.

His remarks came a day after President Moon Jae-in in a New Year’s press conference Monday expressed the belief that North Korean leader Kim Jong-un still has the will for denuclearization and dialogue and encouraged the incoming U.S. administration to build on the diplomatic overtures made by the Donald Trump government. Moon also said that the two Koreas could discuss the matter of Seoul and Washington’s combined military exercises through an inter-Korean joint military committee if needed.

Harris noted that while North Korea may not be an enemy to South Korea, everyone should remember the remarks by North Korean leader Kim Jong-un at last week’s ruling Workers’ Party Congress calling for stronger nuclear and military capabilities. Kim has also demanded a halt to Seoul and Washington’s military exercises in order to improve inter-Korean relations.

Harris said that North Korea and China "will continuously test the resolve of our alliance and will seek ways to weaken our strong ties and sow doubt in order to divide us.”

Harris’ speech came one day before his departure as ambassador to Seoul, a post he has held since July 2018. His departure comes just ahead of the inauguration of Joe Biden as the new U.S. president Wednesday, replacing Trump.

Harris warned, “There are ample historical examples of what could transpire, including what happened on that fateful day almost 71 years ago, if we're not ready," in reference to the outbreak of the 1950-53 Korean War.

Harris, a former commander of the U.S. Pacific Command, served as a top diplomat in Seoul amid a de-escalation of tensions on the Korean Peninsula as dialogue unfolded between Kim and Trump after their first summit in Singapore in June 2018. North Korea halted its nuclear and longer-range missile testing, while Seoul and Washington postponed or scaled down many of their larger joint exercises. During this period, Washington also pressured Seoul, among other allies, to pay more for defense, with Trump describing the joint drills as “expensive” several times throughout his presidency.

Harris pointed out that it was “regrettable” that Kim has not seized opportunities after three meetings with Trump and three with Moon, urging the North Korean leader to embrace the full potential of negotiations.

The ambassador also said the United States is on the same “team” as South Korea in the face of any bullies, addressing Seoul’s concerns of being caught in the strategic rivalry between Washington and Beijing.

Likewise, he pointed out that it was a “false narrative” for the South Korean government to think it is being forced to choose between its security ally, the United States, and its largest trade partner, China. He noted that the United States already made a historic choice in 1950, at the onset of the Korean War, as was the case for China. South Korea likewise made the choice in 1953 with the signing of the Mutual Defense Treaty with the United States, as was the case with North Korea, which signed the Mutual Aid and Cooperation Friendship Treaty with China in 1961, he added.

While acknowledging ongoing tensions between Seoul and Tokyo, Harris said that the “reality is that no important security or economic issue in the region can be addressed without both,” encouraging trilateral cooperation between the United States and its Asian allies.

On the transition of administrations in the United States, Harris said, “Going forward, you can rest assured that the Biden administration will continue the U.S. efforts to further strengthen the U.S.-ROK alliance," referring to South Korea's official name, the Republic of Korea.

Harris paid a courtesy call on Moon at the Blue House Tuesday afternoon, and the president requested the ambassador’s continued interest in and support for the Korea-U.S. alliance. The Blue House said that Moon during the 30-minute meeting presented Harris with a farewell gift of Andong soju, a liquor enjoyed by the ambassador.

On Monday, Harris paid a farewell call to Prime Minister Chung Sye-kyun at the government complex in central Seoul and said that he wishes to play a role in advancing the Korea-U.S. alliance. He earlier met with National Assembly Speaker Park Byeong-seug.

In a Twitter post last week, Harris wrote: “As has been reported, my time as ambassador is ending. I’ll depart post next week.” He added that he and his wife, Bruni Bradley, “have enjoyed our lives here in [Korea] immensely” and that “there’s no better place to serve as ambassador” and “no better friend [and] ally than [Korea]."

After Harris’ departure Wednesday, Rob Rapson, the U.S. deputy chief of mission, will serve as charge d'affaires ad interim until U.S. President-elect Biden names a new ambassador to Seoul. Rapson has previously served as director of the Office of Korean Affairs at the U.S. State Department and served in various posts in Seoul, Busan and Tokyo. 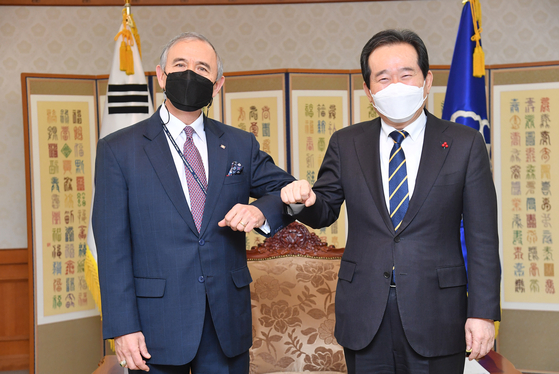