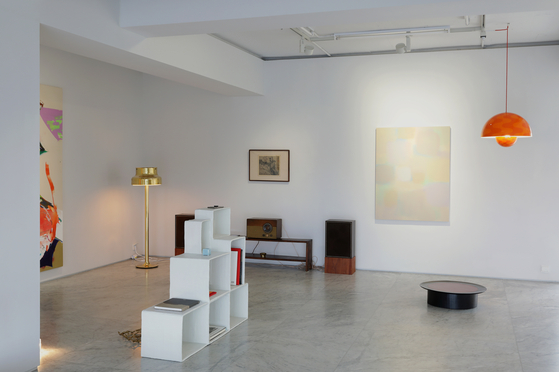 The exhibition “Time in Space: The Life Style” at PKM Gallery in central Seoul presents artworks by old masters and contemporary artists along with vintage furniture pieces as if the galley space were the house of a stylish collector. [PKM GALLERY]


While the national and municipal museums in Seoul are closed indefinitely in line with tightened social distancing measures amid a surge in Covid-19 cases, several commercial galleries opened new exhibitions that feature artworks and craftworks with decorative and soothing qualities, so as to appeal to collectors who now have more interest in interior design as they are spending more time at home amid the pandemic.

Among the exhibitions, the Korea JoongAng Daily has picked three shows at galleries in the Samcheong-dong art zone, east of Gyeongbok Palace in central Seoul. They are “Time in Space: The Life Style” at PKM Gallery; “Ceramics by KIM Jong Hun” at Hakgojae Gallery; and “Jean-Michel Othoniel: NEW WORKS” at Kukje Gallery.

Time in Space: The Life Style

They are part of the exhibition going on at PKM+, an annex building of PKM Gallery. “PKM+ was previously a residence built in 1969 by renowned Korean architect Kim Chung Up,” explained Park Kyung-mee, director of the gallery. “The building was renovated but still has some qualities of a living space in terms of its scale and ambiance. Accordingly, we have decided to present this space as if it were someone’s home in which paintings by Joseon masters and by contemporary artists are together along with vintage furniture pieces.”

The ground floor of PKM+ is now a kind of living room, according to Park. In addition to the works mentioned above, there is an ink landscape painting by the Joseon master Jeong Seon (1676-1759), an abstract painting by contemporary artist Bek Hyunjin and a sculptural shelving unit by American artist Andrea Zittel, as well as vintage speakers and an amplifier from the 1940s.

The basement floor is akin to a lounge, with a home bar at its center. In addition to a bar table and a shelf commissioned by Korean designer Smallstudiosemi, there is a drawing by the pioneer of Korean modern sculpture Kwon Jin-kyu (1922-73) and a mirrored work by British contemporary artist Darren Almond.

“In the unexpected era of the pandemic, individuals need to stay at home for prolonged periods, so residential space is expanding its functions as a space not only for resting but also for working and social gatherings,” Park said.

“Accordingly the residential space now needs to give people some inspiration and vision for the future. By letting artworks and design pieces from across time and space co-exist and resonate with each other, this exhibition intends to provide an example of an inspiring residential space.”

The exhibition runs through Jan. 30, 2021. For details, visit www.pkmgallery.com 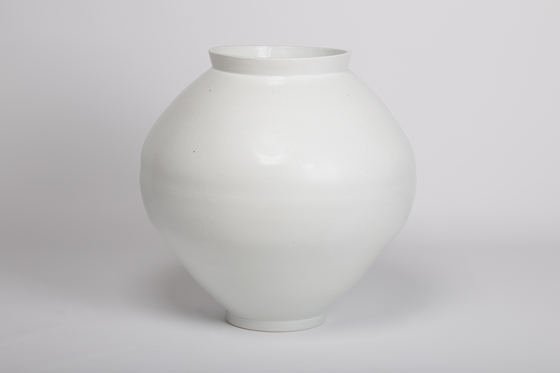 In harmony with Hakgojae Gallery building, which has elements of hanok, or a traditional Korean house, seven moon jar pieces, which refer to traditional Korean white porcelain jars reminiscent of a full moon in their rounded shapes, and more than 80 tea bowl pieces are exhibited in the building.

Among them are three tea bowls and one moon jar from the Joseon period. The other tea bowls and moon jars were made by 48-year-old ceramist Kim Jong Hun.

Kim’s bowls on view have yellowish soil colors and warm and rough textures. They are in the style of Ido chawan, which refers to Joseon bowls admired and used for Zen-style tea ceremonies in Japan in the 16th century.

There are diverse theories about Ido chawan. The famous ceramist Kwon Dae-sup, who presents a moon jar in the ongoing PKM Gallery exhibition and held an exhibition of his bowls at Park Ryu Sook Gallery last September, once said "The Joseon bowls were originally for various kinds of food, while the Japanese received them as tea bowls."

On the other hand, Hakgojae and ceramist Kim have the view that the Joseon bowls celebrated in 16th-century Japan were originally tea bowls. They call the Joseon tea bowls “Jung Ho dawan.” Both chawan and dawan mean tea bowl.

“Yellow is the true color of the earth,” the gallery wrote on its website. “Hakgojae Gallery believes the Jung Ho tea bowl... bears the color of infinitely profound and endlessly warm Mother Earth.” 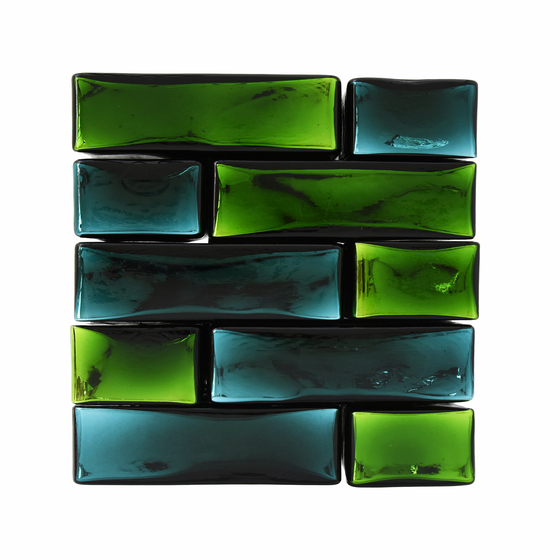 “All of these new works were created during the lockdown caused by Covid-19,” the gallery wrote on its website. “The exhibition not only presents a ‘new’ and emboldening body of work during this period of distress, but also embodies the artist’s commitment to... the immutable beauty that remains even during our current chaos.”

After testing various materials, including sulfur, Othoniel turned to glass in the 1990s. He became enchanted with the material because of its malleability, which, he said earlier, accords with his interest in “the moments of transition when materials or objects change from one state to another.”

In the two spaces of Kukje Gallery’s K1 building are two series of Othoniel’s new works. In the first space are works in the “Precious Stonewall” series, which are translucent glass bricks of dark blue, yellow and emerald green colors that the artist created with techniques he learned from Indian glass artisans. They also represent the LGBT community’s Stonewall Riot in New York in 1969, the artist said. The sculptures are “a result of Othoniel’s latest research into glass and his first attempt at this level of architectural scale,” the gallery said. 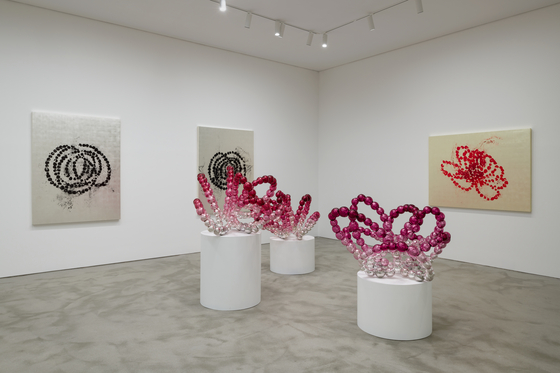 The exhibition “Jean-Michel Othoniel: New Works” at Kukje Gallery presents the celebrated French artist’s latest glass works including the sculpture series “Rose of the Louvre” in the photo. [KUKJE GALLERY]


In the second space are a series of glass sculptures and paintings that depict roses. There are six pieces from his “La rose du Louvre” paintings, four new rose paintings and four rose sculptures.

“'La rose du Louvre’ paintings are exceptionally meaningful to the artist as they were recently made part of the permanent collection of the Louvre after having been produced as commissioned works for the 13th anniversary of the I. M. Pei-designed glass pyramid in 2019,” the gallery explained.

The works were inspired by a rose in Baroque master Peter Paul Rubens(1577-1640)’s painting “The Wedding by Proxy of Marie de’ Medici to King Henry IV,” the artist said.

The exhibition runs through Jan. 30, 2021. For details, visit www.kukjegallery.com