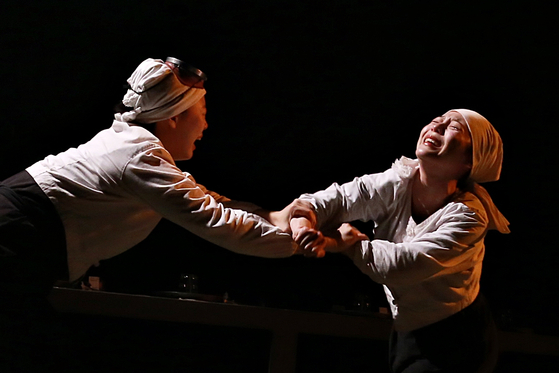 A scene from "Haenyeo Kitchen," a play that features real haenyeo in Jeju Island. [HAENYEO KITCHEN]


Eighty-nine-year-old Kwon Young-hee is the oldest haenyeo (the indigenous female divers of Jeju who are on Unesco’s list of Intangible Cultural Heritage) in Jeju Island’s Jongdal-li village. Kwon, who has been living life as a haenyeo since she was 10 years old, is following in the footsteps of her mother who lost her husband when she was in her 20s and had to raise five children.

She shares conversations she had with her mother that bring tears to the eyes of those who gather to see her performance in “Haenyeo Kitchen.” The audience bursts into laughter when she even jokes that the life of haenyeo these days is too easy as they can wear rubber gear to keep themselves warm underwater and have husbands to come pick them up after they're finished working for the day. 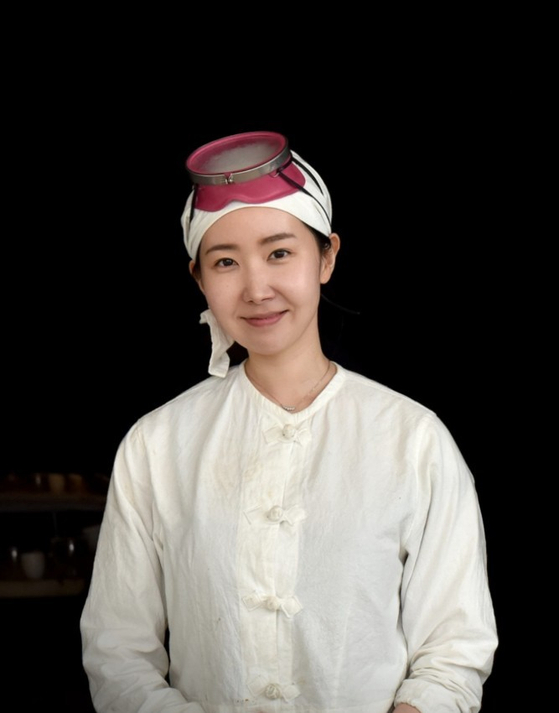 “Haenyeo Kitchen” combines theater and a dining experience and started its operation from January 2019. It takes about 2 hours and 30 minutes for a diner to finish the experience which includes dinner and the show. First is a short play about the life of haenyeo for about 30 minutes, followed by a talk about all the kinds of seafood haenyeo catch. Then dinner is prepared with the seafood caught by haenyeo. After the dinner, there’s a session in which the audience can ask the haenyeo questions. The theater space is in a warehouse in Jongdal-li village in Jeju.


Kim Ha-won is the woman behind "Haenyeo Kitchen." Kim, who was born and raised in Jongdal-li, studied theater at Korea National University of Arts in Seoul. She was preparing to go study abroad in the United States, but changed her mind when she was struck with inspiration for this unique concept.

She sat down with the JoongAng Ilbo, an affiliate of the Korea JoongAng Daily, to share what the performance is all about. Below are edited excerpts. 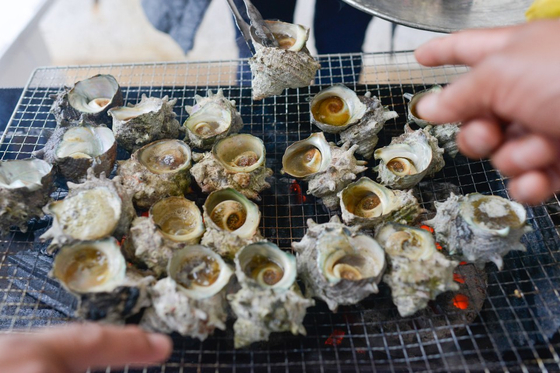 Sea snail with horns, known as bbulsora in Korean, gathered by haenyeo in Jeju. [HAENYEO KITCHEN]

Why did you start "Hanyeo Kitchen?"


When I came back home during my vacation, I heard that the haenyeo were having a hard time making a living because the seafood prices had plummeted. It heard that murex (called bbulsora in Korean, and also known as Jeju conch) was being sold for 2,700 won [$2.50] per one kilogram [2.2 pounds], which is not at all different from the price 20 years ago. Since I grew up in a household with my grandmother and two aunts who are all haenyeo, I felt so bad and hurt. I thought about ways to make the situation better, and that’s how I came up with the idea.

How did you come up with the unique concept of mixing a performance with a dining experience?


At first, I was planning to put together some festivals or a video event with my friends, but then I realized that the reality of the haenyeo will not change with a one-time event. I came to the conclusion that we needed a more sustainable model to continuously sell seafood [gathered by haenyeo] in the local market. We need to make a market for murex as about 60 percent of a haenyeo’s income comes from sales of that particular seafood. About 2,000 tons of such sea snails become available each year, and about 80 percent of them are sold to markets in Japan. So we presented the idea of the performance and dining experience after a long debate. 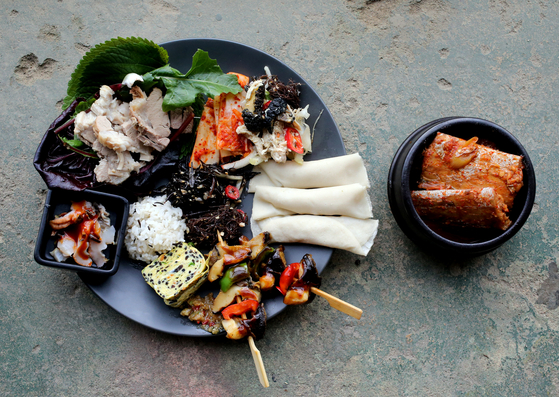 The food served during the show "Haenyeo Kitchen." [HAENYEO KITCHEN]

Who are the people behind the show?


There are seven haenyeo and nine staff members. All the haenyeo, except Kwon, are in their 70s. There are four different performances available and they are all based on the true stories of haenyeo. We decide on which piece to show depending on which haenyeo are performing. The staff members also rotate.

Were you concerned about putting on these performances in a rural area?


At first, even my family tried to persuade me to not do it. So I thought it would be much better to just show them a performance once instead of trying to explain to them a hundred reasons why [this idea could work]. I begged locals to let me use the space for one day, and had them all watch the show. That was in May of 2018. I worked with an expert who I met when I was training the haenyeo and talked her into helping me.

What were the responses?


Haenyeo are usually ashamed of their upbringing for many reasons including the fact that they are not well educated. I have seen that side of them since I was young, I wanted to help them become the “heros.” And they really loved the show. One said that she had always thought of her entire life as an embarrassment, but she came to realize that she had a good life. And then she cried her eyes out. Now they all love being on stage and meeting the audience.

What has been the most difficult part for you?


To bring urban youngsters to the countryside is the most difficult thing. The show at first was put together by three people including myself. In the beginning, whenever friends from school came during their vacation, I asked them to help out for one month and that’s how I gathered the necessary manpower. But as the performances progressed, we needed professionals. But because we couldn't offer any housing or a car, it was difficult to find someone who wanted to stay here long-term.

Have these performances impacted how the haenyeo earn a living?


As the performances have become more widely known, people around Jeju have paid more attention. Now the minimum price per 1 kilogram of murex is 5,000 won. We use 30 percent of that minimum price to get the ingredients necessary for the show. We also paid a total of 100 million won to the haenyeo who perform and cook for the show. We know that this doesn’t solve the problems, but I am proud to say that we helped.

How was "Haenyeo Kitchen" impacted by the coronavirus pandemic?


We really had a good flow last year, and it is true that it became tougher. We did stop the run for about five months this year, and while we did that, we updated the system of how we make the show. We offered a buffet-style service before, but we changed that to us serving food to the tables. We also cut down the capacity of the show from 42 people to 30. The performance is on every Friday, Saturday and Sunday, at 12 p.m. and 5: 30 pm., and thankfully, almost all the seats are filled.

What’s your goal for the future?


I’m trying to open a second spot close to Jeju International Airport. I want to make a simplified version of the show. I’m also debating whether to include haenyeo as it might be difficult for them to travel.