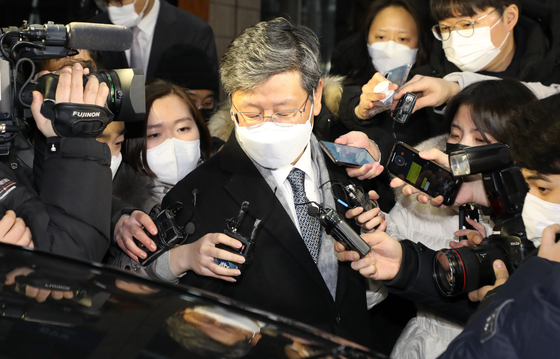 Vice Minister of Justice Lee Yong-gu leaves the ministry building on Wednesday after attending a hearing of the disciplinary committee that issued a two-month suspension against Prosecutor General Yoon Seok-youl. [YONHAP]


Newly appointed Vice Minister of Justice Lee Yong-gu is facing snowballing public criticism that he was let off the hook after allegedly assaulting a taxi driver last month.

The main opposition People Power Party (PPP) issued a statement on Monday that the police abused their power and failed in their duty by not investigating Lee for the alleged assault. They said the police played politics in dropping the case.

Three PPP lawmakers on the Public Administration and Security Committee paid a visit to Police Commissioner General Kim Chang-ryong Monday and urged him to conduct a proper investigation. “Law must be the same for ordinary people and privileged officials,” Rep. Park Wan-su said. “We will expose if Lee was given a special favor by the police.” 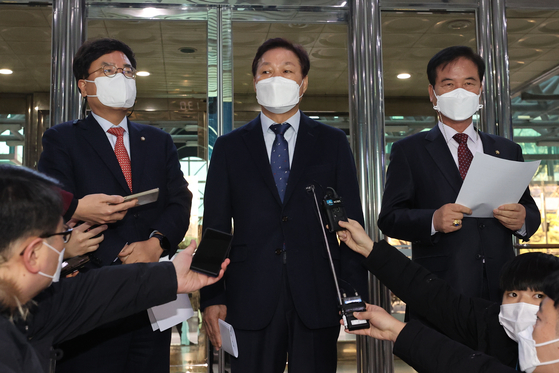 
President Moon Jae-in appointed Lee as vice minister of justice on Dec. 2, allowing him to join the unprecedented disciplinary process against Prosecutor General Yoon Seok-youl, largely seen as his administration’s attempt to get rid of the country’s top prosecutor. Lee is a former judge who headed the Legal Affairs Bureau of the Justice Ministry from August 2017 until April of this year.

After leaving the government, Lee joined a law firm. Until his appointment earlier this month, he was a defense attorney for former Energy Minister Baek Woon-gyu, a primary suspect in the prosecution’s ongoing investigation into an allegedly politically expeditious decision-making to shut down the country’s second-oldest nuclear reactor.

Local media reported last week that Lee, while drunk, allegedly assaulted a taxi driver early last month, but the police did not launch an investigation.

According to the Seocho Police Precinct on Saturday, Lee took a taxi to his home in Seocho-dong in Seocho District, southern Seoul, on Nov. 6. He fell asleep in the car, and the driver woke him up when they reached the destination. Lee allegedly hurled insults at the driver and grabbed him by the collar.

Law experts said it was wrong for the police to drop the case without any probe. “The police should have booked Lee and then dropped the case if appropriate after an investigation,” said Soung Jae-hyun, a researcher at the Korean Institute of Criminology.

Analysts said Lee should have been investigated even if the taxi driver told the police he didn't want to file a criminal complaint. They said attacking a driver of a motor vehicle is not a simple case of assault, but a more serious crime governed under the Act on the Aggravated Punishment of Specific Crimes. According to the law, the police do not require a victim’s complaint to launch an investigation.

According to Clause 10, Article 5 of the act, any person who uses violence against or threatens a driver operating a motor vehicle shall be punished by imprisonment with labor for up to five years or by a fine up to 20 million won ($18,000).

The police said they did not investigate Lee because the assault took place while the car was parked inside the apartment complex, and the driver was not operating the vehicle on the road.

“The law sees that a passenger transport such as a taxi is in operation even if it stopped to let a passenger in or out,” Kim said. “Therefore, this is not a case that the police can just dismiss. Even if the assault took place inside an apartment complex, the police should have booked Lee and investigated if the incident violated public order and if there had been any attempt to assault the driver before the car reached the destination. The police should have investigated the case apart from the victim’s testimony before dismissing it.”

The Seocho Police Precinct told the JoongAng Ilbo that it took over Lee’s case from the local police station on Nov. 7, had a legal review and then closed it on Nov. 12 without any further action. The police said the decision was not extraordinary, dismissing speculation that they treated Lee specially.

It remains to be seen if the police will reopen a probe. Last week, a civic group filed criminal petitions to the Supreme Prosecutors’ Office to investigate Lee and the police.

“Since the complaints were made to the prosecution, the prosecution may launch a probe,” said a police official. “We are still discussing whether we should reopen this case or not.”

Punish all who knew