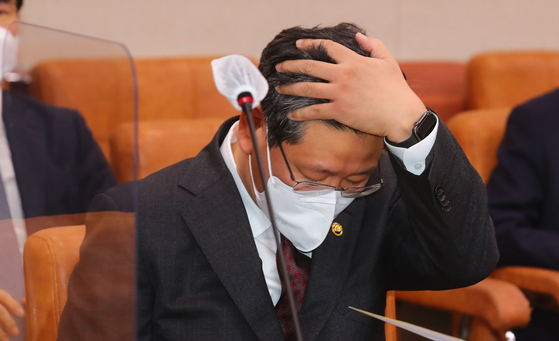 Vice Minister of Justice Lee Yong-gu attends the Legislation and Judiciary Committee meeting at the National Assembly on Monday. [NEWS1]


The prosecution has formally started a probe into whether the police had let Vice Justice Minister Lee Yong-gu off the hook when he allegedly assaulted a taxi driver last year.

Sources informed about the probe told the JoongAng Ilbo Wednesday that the Seoul Central District Prosecutors’ Office started a probe into an assistant inspector of the Seocho Police Precinct shortly after civic groups filed criminal complaints in December to investigate Lee’s alleged assault of a taxi driver in November and the subsequent police cover-up.


Lee, appointed the No. 2 figure at the Justice Ministry in December, has been in the hot seat after opposition politicians claimed police may have let him off the hook for the assault.

According to police, Lee took a taxi to his home in Seocho-dong in Seocho District, southern Seoul, on Nov. 6. He fell asleep in the car, and the driver woke him up when they reached the destination. Lee allegedly hurled insults at the driver and grabbed him by the collar.

But controversy flared up again after media reports showed that there was in fact footage from the taxi and that the taxi driver had shown the video in question to a police officer through his mobile phone in a police investigation on Nov. 11.

The assistant inspector of the Seocho Police was accused of closing the case without further investigation despite having seen the video of the assault. The taxi driver claimed that the officer watched the approximately 30-second-long video, then said he was going to “pretend [he] never saw” the footage.

The National Police Agency issued an apology last month for misleading the public. After an internal probe, the police recently ordered the Anti-Corruption and Public Crime Investigation Team of the Seoul Metropolitan Police Agency to formally open a case against the assistant inspector.

It is rare for the police and prosecution to pursue two separate probes on one incident simultaneously.

The prosecution is already ahead in its probe. It searched and seized the assistant inspector’s mobile phones on Jan. 27.

On Feb. 2, the prosecution also summoned the suspect and conducted digital forensics of the seized phones while he was observing. The prosecution reportedly seized three phones, including a work phone.

The prosecution is also looking into the possibility that higher-ranking police officers, possibly the Seocho Police chief, the head of the Seoul Metropolitan Police Agency or the police commissioner general, were involved in the decision to let Lee off the hook.

While the prosecution is intensifying its probe into the police’s suspected abuse of power and dereliction of duty, it made conspicuously little effort to investigate Lee. Lee has not been questioned or listed as a suspect.

Shortly after the police took the taxi driver’s report and responded on the scene, surveillance camera footage from a nearby apartment showed Lee used his mobile phone to make a call. Although the prosecution obtained the footage earlier this month, prosecutors decided that they won’t investigate whom Lee had called. Suspicions are high that he had contacted someone with influence over the police.

Lee claimed he had never pressured the police to dismiss the case, saying he must have phoned his family after the incident.

The Seoul Central District Prosecutors’ Office told the JoongAng Ilbo that there is no need to investigate whom Lee had telephoned.

A probe into Lee’s alleged assault is yet to take place. Sources said Lee had requested the taxi driver to delete the black box footage after the assault, and prosecutors are considering investigating Lee on charges of ordering evidence destruction, in addition to the suspected assault.

The police also secured the apartment surveillance record that showed Lee calling someone, sources said. The police did not confirm whether or not it will investigate whom Lee had phoned.