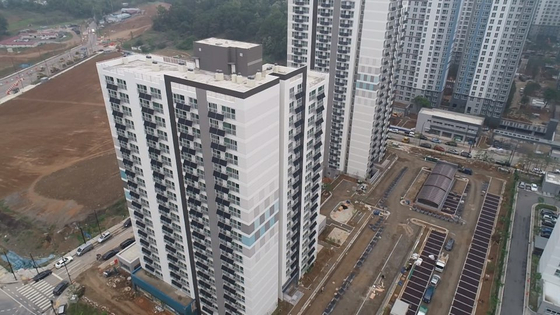 The “Happy Housing” complex built in Hyangdong District, Goyang in Gyeonggi has mini solar panels installed in the verandas of each household. It is expected to help residents reduce carbon emissions and also save money on their electricity bills. [GOYANG CITY GOVERNMENT]

Some 250 tons of waste thrown away daily by the residents of the city of Goyang are gathered at the Goyang Biomass Energy Facility in Gyeonggi.

Food waste undergoes a complicated disposal system, and in the process of being converted into compost, it produces methane, a type of greenhouse gas.

In the past, the methane gas produced in this process was burned off at a high temperature. But last year the city started working with the private sector to produce biogas, created when organic material breaks down, and sold to Korea District Heating.

The biogas passes through 2.7-kilometer-long (1.7 miles) pipes and can be used for heating energy, among other things. The city also uses it to remove the odor coming from the food waste treatment process. The Goyang city government estimates that it was able to bring in 430 million won ($390,000) and reduce greenhouse gases by 4,000 tons through this process.

Nearby, a “Happy Housing” complex built in Hyangdong District, Goyang, called the “Living Lab” project is also underway. The Happy Housing project is a government public rental housing program aiming to give young people priority to move in, to address their difficulties finding housing.

Each residence in the new housing complex will be equipped with mini solar panels. The management office will be able to monitor the system to keep track of the power generation and reduction in carbon dioxide.

Goyang city estimates that residents can save between 30 to 67 percent in electricity bills while reducing greenhouse gas emissions by 100 tons annually.

Jeong Chang-hee, the head of the management office of the complex, said, “Residents will be able to install a mobile app and be able to monitor the energy generated from their homes and the cost. Through the mini solar panels, one household is expected to save over 100,000 won in electricity bills per year.”

It plans to build solar power plants the size of nine football fields and expand investments into energy transition, among other projects.

Lee Jae-hyuk, a climate and environment official with the Goyang city government, said that the city plans to set quarterly indices on greenhouse gas reduction targets and “invest more than the current amount toward carbon neutrality and responding to climate change.”

Local governments have been competing to kick off projects aimed at reducing carbon emissions after the Korean government announced its Green New Deal initiative and pledged to achieve carbon neutrality by 2050 earlier this year.

Local governments are producing policies to reduce greenhouse gas emissions to cater to their region.

Changwon in South Gyeongsang plans to supply 52,500 hydrogen-powered cars by 2040, or 10 percent of the total number of registered vehicles in the city. Starting in January, the city also will dispatch hydrogen trucks to collect trash.

The city of Dangjin in South Chungcheong, known for a high concentration of coal power plants, proposed building the RE100 industrial complex. The global RE100 initiative brings together major businesses committing to transitioning to 100 percent renewable electricity.

“Until now the central government set the policy and local governments were partners to implement that policy, but this method has to change,” said Park Yeon-hee, director of the Local Governments for Sustainability’s Korea office. “There has to be support for innovative policies to take place at the local government level.”

The Ministry of Environment and the Korea Electric Power Corporation (Kepco) also plan to consult with local governments in the process of implementing measures to reduce greenhouse gas emissions and support their ability to respond to climate change.

Jo Kang-hee, an official overseeing climate and air quality management at Kepco said, “President Moon Jae-in pledged a vision to achieve carbon neutrality by 2050, and the role of local governments for the substantive reduction of greenhouse gases has become even more important. We will strengthen consultations for customized carbon neutrality plans next year.” 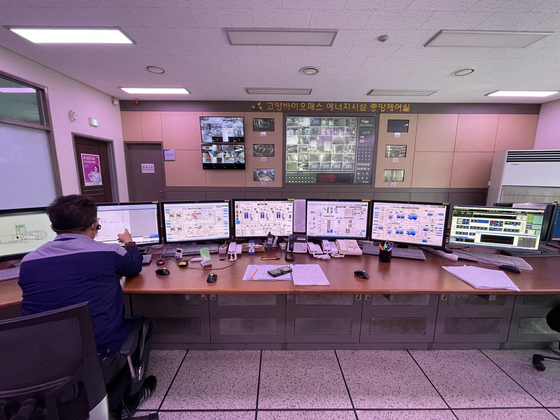 Carbon border tax: What the EU proposal means for Korea