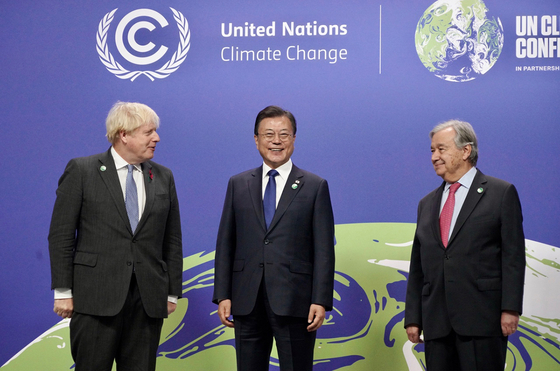 "The Republic of Korea is enhancing its 2030 NDC targets to cut greenhouse gas emissions by at least 40 percent from 2018 levels," Moon said in an address at the 26th UN Climate Change Conference, or COP26.

"This is a bold objective that has been raised some 14 percent from the previous one, a herculean task indeed that demands steep emission cuts over a short time horizon."

At the first day of the COP26 World Leaders Summit, Moon also formally announced Korea's decision to join the Global Methane Pledge, committing to reduce methane emissions by 30 percent by 2030. Methane, a greenhouse gas more potent than carbon dioxide, is responsible for about 30 percent of current global warming, according to the UN's Intergovernmental Panel on Climate Change. 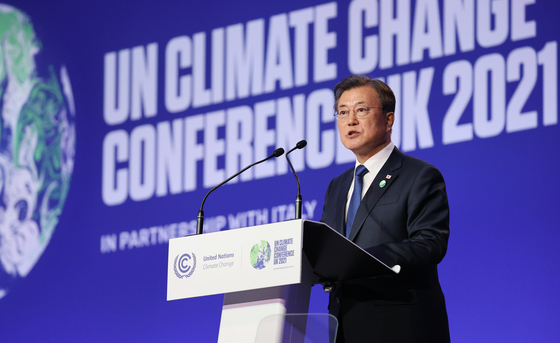 Moon stressed Korea's commitment to cooperation in forest restoration, drawing from its own successful experience of reforestation after World War II.

"Growing trees and bringing forests back to life offers a vital solution to the climate crisis," said Moon. "It also shows us the way to avert desertification and promote peace in border areas."

South Korea is offering to help rejuvenate forests in developing countries and cooperate in reforestation efforts with North Korea.

"Through inter-Korean forestry cooperation, we will strive to mitigate greenhouse gas emissions across the entire Korean Peninsula," Moon added.

North Korea has suffered from severe deforestation due to excessive logging to create space for farmland and to be used as fuel, which has been blamed for flooding and other natural disasters.

South Korea will host the World Forestry Congress in May 2022.

Moon stressed that South Korea will join global efforts to reduce the use of coal.

"By 2050 coal-powered generation will be phased out completely [in South Korea]," said Moon.

He noted that Korea has decommissioned eight coal-fired power plants earlier than scheduled, and will shut down two more by the end of the year. Korea stopped issuing permits for new domestic coal power plants and in April suspended public financing for new overseas coal power generation as well.

Korea will cooperate with developing countries in their transition to low-carbon economies, including the development of renewable energies and advancing of green technology, he said.

Moon also encouraged the holding of a Youth for Climate conference on a regular basis.

"If our future generations who are directly affected by the climate crisis work together with older generations to find solutions, we will be able to advance faster towards building a sustainable world," said Moon. "We should never regret that we did not act soon enough for our planet."

Moon joined world leaders from some 120 countries, including U.S. President Joe Biden and British Prime Minister Boris Johnson, to assess progress since the landmark 2015 Paris climate accord, which calls for keeping global warming to below 2 degrees Celsius above pre-industrial levels, and preferably to 1.5 degrees. The leader addressed the need to secure more ambitious pledges from countries to further reduce emissions and assure that the goal of limiting global warming to 1.5 degrees Celsius is met.

In a session on "Action and Solidarity," Moon said Korea could draw on its experience and serve a bridging role with developing countries in their transition to low-carbon economies.

Moon kicked off a nine-day European tour which included the G20 summit in Rome over the weekend, Britain's COP26 conference, and a three-day state visit to Hungary from Tuesday.