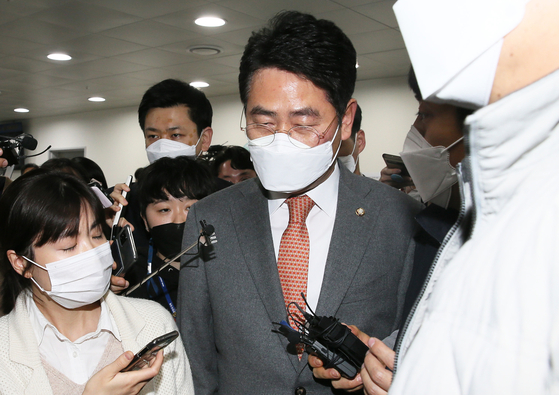 People Power Party Rep. Jeon Bong-min leaves a press room at the National Assembly on Tuesday after announcing his quitting of the party. Jeon and his family have been implicated in corruption allegations. [OH JONG-TAEK]


Rep. Jeon Bong-min, the richest lawmaker in Korea, quit the opposition People Power Party on Tuesday over corruption allegations against him and his family.

MBC aired on Sunday an investigative program on how Jeon was able to become the wealthiest lawmaker in Korea, reporting some 90 billion won ($81.3 million) in wealth earlier this year.

The program reported that Ijin Construction Company, with which Jeon had executive roles from 2000 to 2018, grew exponentially after Jeon was elected to the Busan Metropolitan Council in 2008. Jeon’s father is the largest stockholder in Ijin.

Jeon remained an executive of the company while serving as a city council member. Jeon was elected to the National Assembly for the first time last April.

The MBC report raised allegations as to whether Jeon abused his position as a city council member to win construction projects.

The allegations did not stop there.

According to the report, Jeon and his two brothers started a construction company in 2008 called Dongsoo Togeon, which started thriving in 2013. Sales that year amounted to 25.8 billion won, most of which were from projects subcontracted from Ijin Construction, according to MBC. The next year, 60 percent of the company's total sales of 50.6 billion won were from subcontracted projects from Ijin Construction.

“This can be a serious breach of the Monopoly Regulation and Fair Trade Act,” Ha Seung-soo, a lawyer specializing in tax evasion, told MBC.

The Jeon brothers started another construction company in 2011, which worked the same way as Dongsoo, according to the report.

MBC reported in the same program that Jeon’s father offered to pay 30 million won to an MBC reporter who contacted him regarding corruption allegations, if the reporter would let the matter rest.

Jeon announced his decision to leave the party at the National Assembly on Tuesday.

“I apologize for my father’s inappropriate comments,” Jeon said. “I decided to leave the party to take responsibility [...] I didn’t want [the scandal] to hurt the party.”

Regarding the allegations, Jeon said he will respond to them through “official procedures and regulations.”

How to eradicate corruption (KOR)

How to eradicate corruption