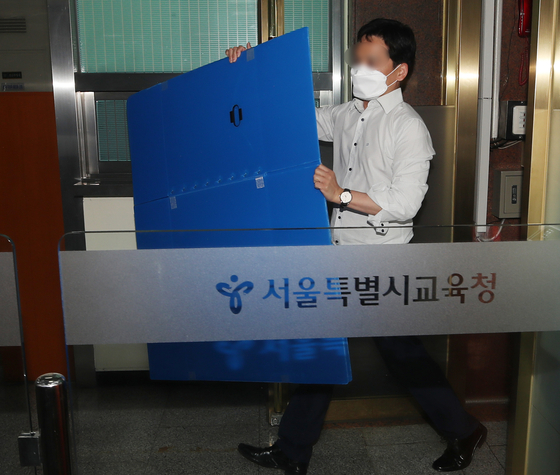 An official of the Corruption Investigation Office for High-ranking Officials enters the Seoul Metropolitan Office of Education on Tuesday to raid the office of Seoul's superintendent for education, Cho Hee-yeon, who has been accused of allegedly abusing his power to hire back sacked teachers. [YONHAP]

The Corruption Investigation Office for High-ranking Officials (CIO) raided the Seoul Metropolitan Office of Education on Tuesday to investigate allegations that Seoul’s superintendent for education, Cho Hee-yeon, abused the power of his office to hire back sacked teachers.

Cho was not in his office at the time of the raid but issued a statement shortly after.

“The CIO was born out of the people’s desire [for justice],” Cho said. “The Seoul Metropolitan Office of Education will cooperate with the investigation […] I hope that the CIO will be able to conduct the investigation in a rules-based manner and not be swayed by partisan politics.”

The Board of Audit and Inspection of Korea (BAI) asked the police to investigate the allegations last month.

According to the BAI, Cho allowed five teachers who were fired for violating the Public Official Election Act to be re-hired in 2018. Four of the teachers were convicted of illegally raising funds for campaigns during the 2008 election for Seoul’s education superintendent. One was convicted of spreading false information about a candidate during the presidential election of 2002, but pardoned by the Roh Moo-hyun administration in 2007.

The BAI found that at least one of the five was a member of Cho’s staff during his election campaign in 2018.

It was not long after Cho was re-elected in 2018 that he gave orders to the Seoul Education Office to hire the five teachers again, the BAI said. The human resources officers protested the order, saying that one of the five teacher's personal connection with Cho could be construed as preferential hiring, according to the BAI. Cho was said to have told the officers, “There is nothing wrong with hiring them” through a type of fast-track process, and that he forewent the usual hiring process that involves human resources officers.

Cho's ramming through of the hires is at the crux of the allegations of abuse of power.

The CIO took up the case earlier this month -- its first case. The agency was established as part of the Moon Jae-in administration’s agenda to reform the prosecution, largely by reducing its powers.

It has the power to indict Supreme Court justices, the prosecutor general, judges, prosecutors and police officials, precluding the prosecution from being able to protect its own members from criminal charges.

The establishment of the CIO was the centerpiece of the ruling Democratic Party’s decades-long effort to rein in the powers of prosecutors and politically motivated prosecutions. Opposition parties say the CIO is an attempt by the Moon administration to avoid investigations of his allies and inner circle.

After the law establishing the agency was passed in December 2019, disagreements among parties in appointing the head of the agency delayed its launch for another year. The agency started up in January.

United to keep the subsidy