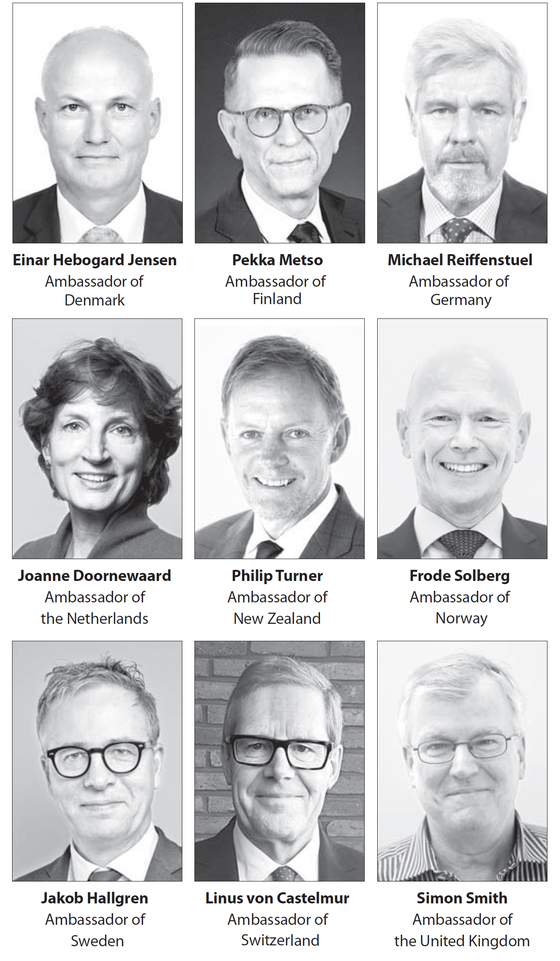 The announcement by President Moon Jae-in in late October that Korea would adopt a target of carbon neutrality by 2050 reveals determined and responsible leadership over hesitance. Korea can and should be proud of taking on its responsibility.

We have witnessed with great interest how Korea is heading towards an increasingly green path. The Green New Deal announced in July has positioned Korea as a leading provider of green stimulus in global efforts to recover from Covid-19. Hosting the P4G-summit in 2021 will highlight private-public cooperation to reach the 17 Sustainable Development Targets and the Goals of the Paris Climate Agreement. In addition, with the president’s announcement of a carbon-neutral target in 2050, and the broader Green New Deal, Korea is positioning itself as a climate champion in Asia.

This comes on the backdrop that so far Korea has been the seventh largest emitter of carbon dioxide (CO2), the world’s fourth largest coal importer and one of the largest investors in coal worldwide. The new commitments are, therefore, significant and pathbreaking. With the 2050 target, the next step will be to turn the goal into action, to the enormous benefit of current and future generations.

President Moon has framed the reduction of coal power as an opportunity to develop future-oriented industries, increase global competitiveness and create new jobs.

As Environment Minister Cho Myung-rae powerfully put it, climate change is no longer “another country’s story.” Citizens in our countries have also come to accept that climate change affects not just our future, but our daily lives.

For those of us who live in Seoul, worsening air pollution and extreme weather — heat waves, a prolonged rainy season, and typhoons — have brought home the reality of reliance on fossil fuels. The evidence is abundantly clear: Fossil fuels (and fossil fuel subsidies) are environmentally harmful and undermine global efforts to tackle climate change.

Many countries, including our own, have recently committed to a new net-zero target similar to that of Korea’s. Like Korea, we all now face the challenge of turning these targets into real, measurable actions.

To manifest the commitment to the 2050-target, the next step should be Korea’s announcement of its NDC (Nationally Determined Contribution) update under the Paris Agreement, which is the short-term greenhouse gas emission reduction target. All countries are faced with this challenge and it would be a great achievement if Korea can translate its 2050 target into its updated NDC. Showing Korea’s commitment through a strengthening of its NDC would send a very strong signal to the world.

The COP26 in Glasgow next year is intended to kick start the ambition cycle of regularly raised national climate targets. The level of ambition will be influenced by the United Nations’ regular global stocktake on the status of climate action towards reaching the Paris temperature goals. It is therefore crucial that national long-term strategies are underpinned by ambitious national short- and medium-term climate action, to ensure that the temperature goals are met worldwide.

There are some obvious measures Korea can take at the national level to fight climate change effectively, such as elaborating a clear road map to phase out national fossil fuel subsidies, reduce reliance on coal power with a view to phasing out coal fired power generation, and committing to cease financing of coal power overseas.

Moreover, decisive action on climate change is a key part of our collective economic recovery from Covid-19 — as the President has signalled with the Green New Deal.

Green growth is not a cost to the economy, but an investment — and a tremendous opportunity to drive growth and recovery from Covid-19. We believe an innovation leader like Korea will find enormous stimulation in the challenge of transitioning industry to carbon-neutral or carbon-negative alternatives. We encourage Korea to follow the example of countries where industries have declared road maps for fossil-free competitiveness.

In most countries in the world it is now cheaper to build renewable energy sources (such as wind and solar power) than to burn fossil fuels.

As in other parts of the world, Korean industry, we believe, is waking up to and seizing the economic opportunities presented by combatting climate change.

Greener policies can create jobs, drive growth and contribute to a more sustainable and equitable economy. The return on investment will not be purely environmental but also social and economic. More than half of the G-20 have already made net zero emissions pledges. If the United States follows through on the president-elect’s climate plans all of the G7 will soon be making similar pledges. We are facing the beginning of a global economic transition.

To cite just one example, in Denmark it is estimated that that 14,600 full-time equivalent jobs are created throughout the value chain for every 1GW of offshore wind generated.

Korean companies are well positioned to lead this trend, through areas such as 5G, artificial intelligence, hydrogen use, electric vehicles and battery power.

Korean companies are increasingly signing up to Environmental and Sustainable Governance (ESG) targets. Companies such as Kepco, KB Financial Group and Samsung C&T have already committed to end investments in coal.

Korea is well on its way towards building a more climate-resilient economy. We believe it can go further, and become a true “climate champion.”

Following the NDC update, Korea’s hosting of the P4G conference in May 2021 provides a further opportunity to show international leadership on climate change in the lead up to COP26.

Our countries are keen to work with the Republic of Korea on securing a brighter future for our planet and humankind.

Code Red for the globe (KOR)