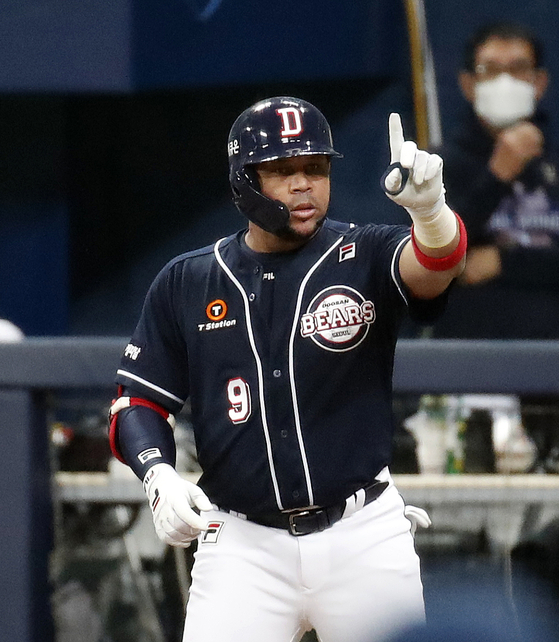 Doosan Bears slugger José Fernández picks up a hit in the sixth game of the 2020 Korean Series against the NC Dinos at Gocheok Sky Dome in western Seoul on Nov. 24.


The Doosan Bears have re-signed slugger José Miguel Fernández for another year.

Fernández, who joined the Bears at the start of the 2019 season, ended the 2020 season with a 0.340 batting average with 21 home runs, 105 RBIs and 104 runs scored. He topped the league for hits for the season, with 199, and ranked fifth for both batting average and runs scored. He was also one of only five players to appear in every single game of the season, allowing him to also lead the league in plate appearances and at-bats.

The Bears also announced the signing of pitcher Ariel Miranda.

He made his MLB debut with the Baltimore Orioles in 2016 before moving to the Seattle Mariners later that season. In 2018 Miranda moved to the Fukuoka SoftBank Hawks of Japan's Nippon Professional Baseball league before signing with the Chinatrust Brothers of Taiwan's Chinese Professional Baseball League earlier this year.

Both Miranda and Fernández started their careers in the Cuban professional baseball league and are reportedly good friends, which Doosan says will help Miranda settle in at the Korean team. His experience playing in four different countries is also likely to help.

The Bears also reportedly confirmed on Wednesday that they are close to finalizing a deal with Toronto Blue Jays pitcher Walker Lockett. If that deal is realized, that would complete the Doosan foreign player roster for the 2021 season.