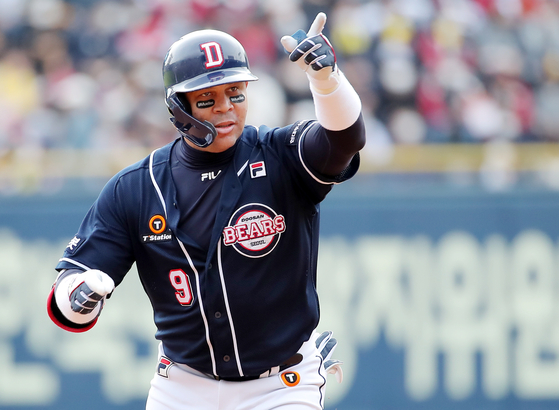 
The Doosan Bears are the only KBO team yet to complete their foreign player lineup for the 2022 season, with the position player spot reportedly left open for Cuban slugger Jose Fernandez.

The Bears have reportedly already agreed terms to bring back Fernandez for a fourth season in the KBO. The deal is yet to be finalized, however, with local media reporting that the hold up is due to administrative issues related to renewing the slugger's passport. That delay is expected to be resolved, with the Bears said to be confident that Fernandez will be back with the team by the start of spring training.

If his return is finalized, Fernandez, who is affectionately known as Jose by Doosan fans, will be only one of two foreign position players to survive the offseason. Eight out of 10 KBO clubs cut ties with their position players this year, with only Fernandez and Jose Pirela of the Samsung Lions set to return.

Fernandez's return comes as little surprise. Over three years in the KBO, he has proven to be a serious threat at the plate with a .333 career batting average, 566 hits, 274 RBIs and 51 home runs. He is also a workhorse, missing only three games in his three years with the Bears.

Fernandez was on particularly strong form during the playoffs last season, when Doosan advanced from fourth place to the Korean Series. In the Wildcard game he batted in five runs, setting a new league record for the most RBIs hit by a single player since the Wildcard was introduced in 2015.

Pirela wasn't able to put up as impressive numbers in his first year with the Lions last season, batting .286 with 158 hits, 97 RBIs and 29 home runs, but was a core part of the squad as it made its return to the postseason for the first time in seven years.

Elsewhere in the KBO it's all new faces: Socrates Brito with the Kia Tigers, Henry Ramos with the KT Wiz, Rio Ruiz with the LG Twins, Yasiel Puig with the Kiwoom Heroes, Kevin Cron with the SSG Landers, DJ Peters with the Lotte Giants and Mike Tauchman with the Hanwha Eagles.