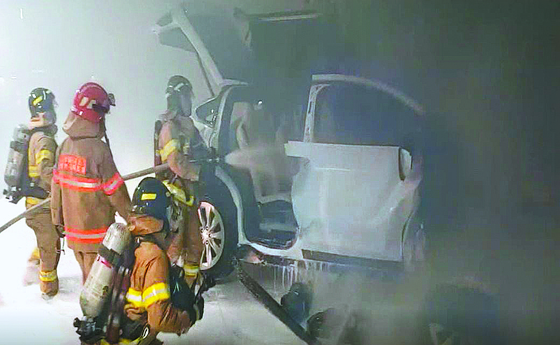 
Police are ramping up an investigation into the fatal conflagration of a Tesla Model X that killed its owner, a 60-year-old attorney surnamed Yoon, and injured two others in an underground parking garage in Hannam-dong, central Seoul, earlier in December.

“Starting this week, we have called in the chauffeur who was driving the car, apartment security guards, firefighters and others to investigate,” said a spokesperson for the Seoul Yongsan Police Station on Wednesday.

Regarding the inquiry sent to the National Forensic Service (NFS) on Dec. 11 requesting an examination of the Tesla Model X involved in the accident, the police said the results will be ready around the middle of January. The NFS is examining the vehicle with cooperation from Tesla’s U.S. headquarters.

“The incident occurred in a very technologically complex vehicle, so a high level of expertise is essential,” said a person associated with the police. “The police are looking into ways to gather advice from experts in academia and companies like Hyundai Motor, which is a manufacturer of electric vehicles [EVs].”

The Model X crashed into the wall of the parking garage in an apartment complex in Yongsan District, central Seoul, then caught fire, on the night of Dec. 9. The car's owner, who was in the passenger seat at the time, died after sustaining burns. The chauffeur, who escaped with injuries, claimed “the car suddenly went out of control," raising the possibility of a sudden unintended acceleration as the cause of the accident, according to police. The fire was extinguished at 10:48 p.m., around an hour after it started.

Police are looking into whether the cause of the accident stemmed from the driver’s actions or a deficiency in the car. The police have not eliminated the possibility that the driver made a mistake while operating the self-driving system.

Tesla has been embroiled in controversy in the United States as well. According to the National Highway Traffic Safety Administration (Nhtsa), there were 127 reports related to sudden unintended acceleration as of the beginning of this year. Among the incident reports, 110 of them led to crashes.

The investigation also aims to answer whether Yoon’s cause of death was the crash or the fire. The police are probing possibilities about the death, including the failure of the airbag to deploy immediately after the crash or toxic gases caused by the fire.

Suspicions had been raised that an employee of the apartment complex actually worsened the fire by attempting to put it out with an unsuitable fire extinguisher, but police said the employee’s attempt did not play a major role.

Police are also looking into who is responsible for the fire department's delay in rescuing Yoon. Firefighters arrived six minutes after the accident occurred and pulled Yoon from the vehicle through its trunk after 25 minutes, but he had already died. The fire department said Tesla’s door handles, which retract by default and pop out when the key fob is near, delayed the rescue. The door handles do not operate when the electricity is cut off in accidents.

The JoongAng Ilbo contacted Tesla for comment, but the EV manufacturer said it does not have anything to clarify.