An exhibition inside Deoksu Palace is currently available by taking a virtual tour inside Seokjojeon Hall. [CULTURAL HERITAGE ADMINISTRATION]


One of the most bustling attractions all year round in Seoul are the city's royal palaces. Each with its own charm, the five royal palaces in central Seoul have been providing both Koreans and visitors from overseas with great scenery as well as a glimpse into a part of Korea’s long history.

But as palace doors have remained tightly shut in recent months amid the coronavirus pandemic, the Cultural Heritage Administration (CHA), which manages four of the five palaces, says it has been mulling ways to allow not only the Korean public but also “foreigners who have been showing so much interest and love toward Korea’s royal palaces,” a chance to enjoy them even during the pandemic.

As one of its projects, the CHA launched a virtual tour of Seokjojeon Hall in Deoksu Palace, which has been a popular offline program.

Although the tour is currently only available in Korean, an English tour will be accessible from next year. But because the exhibition's labels and texts are provided both in English and Korean, the CHA said that the current virtual tour can still be enjoyed by a global audience.

Titled “Imperial Palace of the Daehan Empire,” the virtual exhibition can be accessed by visiting the official website of the Deoksu Palace (deoksugung.go.kr).

For those who have their own virtual reality (VR) headsets at home, a VR version is available. Visitors can choose to tour the building in daylight, or after sundown, with each option providing a different ambiance.

Seokjojeon Hall is the country’s first Renaissance-style stone building built in 1910 inside Deoksu Palace, which served as the main residence for the first monarch of Korea during the Korean Empire (1897-1910).

“Of course, other buildings and palaces are significant to Korea’s history, but Deoksu Palace, which was also called Gyeongun Palace at the time, and the Western influences evident here, are significant as they mark a great transformation of Korea that strived to build a wealthy and strong modern state and secure its sovereignty and independence against foreign powers with imperialistic ambitions,” said Park Sang-gyu, a researcher at CHA who participated in organizing the exhibit. 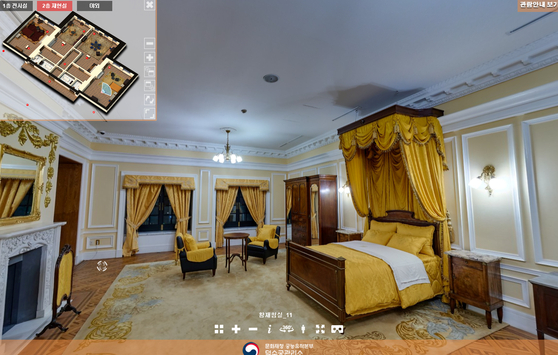 The emperor's bedroom in Deoksu Palace that can be enjoyed virtually. The color theme of the emperor's room was gold, while it was violet for the empress. [CULTURAL HERITAGE ADMINISTRATION] 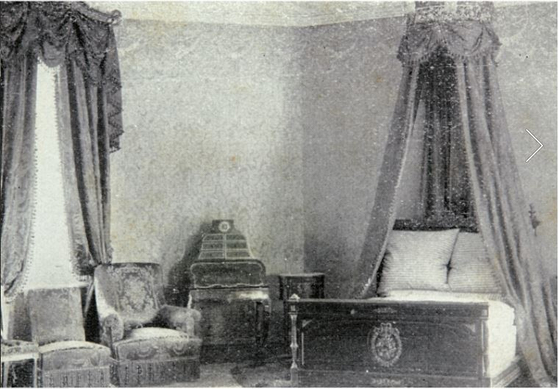 
The exhibit also sheds light on the changes which occurred to the imperial palace after the dethronement of Emperor Gojong in 1907, the systematic demolition by Japanese colonialists and today’s efforts to restore its original splendor.

“Through this virtual tour, we hope to promote the history and culture of the Korean Empire to other countries and to interact with visitors from all around the world in this time of pandemic,” said an official from the Deoksu Palace Management Office.

“We also hope to help the Korean public continue to enjoy and experience traditional culture even though the palace doors are closed as we will open its virtual doors one by one.”