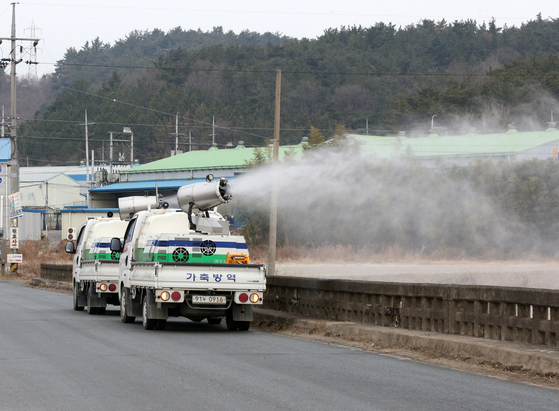 Disinfection is underway in Gyeongju, North Gyeongsang, on Wednesday, following a case near the region. [YONHAP]


Korea's Agricultural Ministry said Monday it has identified a new suspected case of highly pathogenic bird flu, amid the growing concerns over the disease further straining the local poultry industry.

The new suspected case was reported from a duck farm in Jeongeup, North Jeolla, according to the Ministry of Agriculture, Food and Rural Affairs.

The country has so far reported 29 farm-related avian influenza cases since late November, including an infection at a guest ranch.

The latest case was confirmed at a duck farm in Gurye, South Jeolla, on Sunday.

To prevent the further spread of the disease, Korea has been speeding up the process to destroy birds from infected farms and their surrounding areas.

As of Monday, local authorities have culled around 9.6 million birds. All poultry within a 3 kilometer (1.9-mile) radius of infected farms are culled.

Meanwhile, 42 cases in wild birds have been confirmed since late October.

The domestic price of eggs and poultry, meanwhile, has remained stable despite the outbreak of the bird flu.

According to the data compiled by the ministry, the country's average price of eggs increased 1.3 percent in the first three-week period of December from a year earlier. The price of duck meat advanced 10.3 percent.

The price of chicken, on the other hand, shed 1.3 percent over the period due to oversupply, the ministry said.