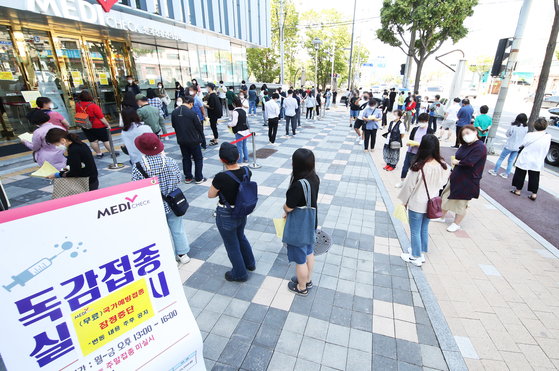 People wait outside the Korea Association of Health Promotion’s Gyeonggi branch in Suwon Tuesday to get flu shots, which they will pay for. [YONHAP]

A government project offering free flu shots to the nation’s old and young was abruptly halted Tuesday after health authorities announced faulty procedures in deliveries. Some vaccines were left at room temperature as they were being shipped instead of being refrigerated.

The Korea Disease Control and Prevention Agency (KDCA) said Tuesday that the vaccines in question had not been administered to anyone and that previously distributed vaccines seem to be safe because no one has reported any “unusual reaction” to the shots so far.

The KDCA highlighted there was “nothing wrong in production processes” of the flu shots, saying they were verified by the Ministry of Food and Drug Safety before being sent to medical facilities by a local pharmaceutical company, when a “problem” in shipping procedures occurred.

How that problem was discovered was not revealed by the KDCA Tuesday, neither did the agency say how many vaccine doses were left at room temperature or for how long. The vaccines were supposed to be kept at temperatures between 2 to 8 degrees Celsius (35.6 to 46.4 degrees Fahrenheit), and any storage temperature above this range can destroy their potency.

Health authorities said the blunder was found among a batch of vaccines that were to be given to 5 million people aged between 13 and 18 starting from Tuesday in accordance to a central government schedule for free flu vaccines.

Until the government verifies the viability of the 5 million doses, the entire free vaccine scheme will be put on hold, the KDCA said.

If authorities conclude there’s nothing wrong with the 5 million doses of vaccines, they will be administered and the rest of the program will restart, the KDCA said, adding it expects the verification procedure to take about two weeks.

KDCA Commissioner Jeong Eun-kyeong said it was “difficult to prejudge” whether the government would discard any doses that were left at room temperature, saying they would have to be examined by authorities first.

The KDCA said it would investigate Shinsung Pharm, a company based in Dongdaemun District, eastern Seoul, which was in charge of delivering the vaccines.

The government’s free flu shot initiative kicked off earlier this month as health authorities vowed to inoculate 19 million people, about 37 percent of the total population, this fall and winter in order to prevent a “double pandemic” of the coronavirus and seasonal flu, which have similar symptoms.

Those who are eligible for free shots are people between the ages of six months and 18 years old, pregnant women and senior citizens aged 62 and older. Everyone else is recommended to get vaccinated at a nearby medical facility with their own money, which costs about 30,000 won ($26).

The free flu shots have been administered since Sept. 8 starting with children. Jeong said Tuesday that health officials would do their best to bring the program back on schedule by no later than October.