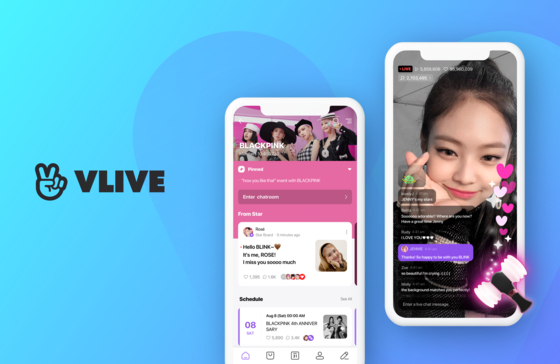 
V Live, Naver’s live video platform, was downloaded more than one million times since it was first offered in 2015, the IT company said Monday, with the numbers receiving a big boost from the coronavirus pandemic.

V Live is a video streaming service for K-pop entertainment where celebrities live-stream videos to communicate with fans. Eighty-five percent of V Live’s users are based overseas and 84 percent are aged under 24 years, Naver said.

By country, the United States tops by the number of users, followed by Indonesia and Japan.

The service benefited from the coronavirus this year, as the pandemic greatly reduced concerts and offline fan events.

According to Naver, the number of live videos streamed by K-pop stars this year increased 1.4 times from last year, while the number of concerts and fan meetings held on the platform increased 2.6 times.

The increased activity of K-pop celebrities on V Live led to more purchases.

Purchases of the V Live Membership, which offers wider access of artist content and concert videos, this year increased 1.9 times from last year. Sales of fan goods were up as well, with sales of light sticks, which fans hold up at artists' concerts or performances, up 2.2 times on year.

This year, new subscriber numbers were up 1.5 times. Videos were played twice more than 2019, and the number of comments jumped by 2.5 times.

“We’re applying constant updates to offer a realistic, lively experience to connect fans and celebrities in a digital environment,” said Kim Jung-mi, who heads Naver’s V Live. “With our technology and business model, we plan to further accelerate the expansion of our user base globally.”