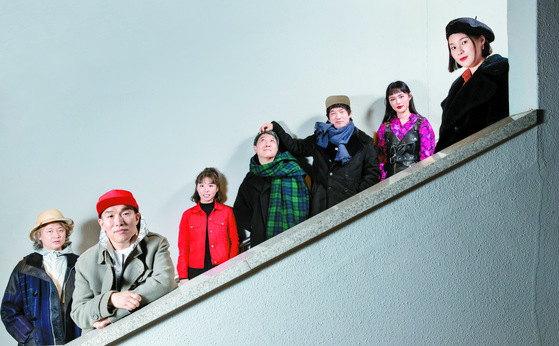 
What is Korean dance music? The band Leenalchi showed a new example with strange but intriguing music pieces featured in a series of national tourism campaign videos entitled “Feel the Rhythm of Korea.”

In the six videos set in six cities of Korea, which have been released on YouTube and other platforms one by one since last July, the members of Ambiguous Dance Company in hybrid costumes dance some hybrid dances to Leenalchi’s music pieces, in which the old songs of pansori, or Korean traditional musical storytelling performance, are combined with electronic dance music beats. The traditional pansori is performed only by a single singer and a drummer called gosu without any other instrumental accompaniment.

The video series has become a global hit, attracting more than 500 million views in total. The songs of Leenalchi have also become famous, especially “Tiger Is Coming,” which is based on a song of pansori “Sugungga (The songs of the Underwater Palace).”

The efforts for decades to popularize gugak, or Korean traditional music, have continued through this year and have begun to see some fruits. Before the hit of “Tiger Is Coming,” there was the success of “Daechwita,” a solo rap song released in May by Suga, a member of the K-pop superstar band BTS. The song even made it to the Billboard Hot 100 chart and the top 10 of Britain's singles chart. It is based on a gugak genre of daechuita, which refers to parade music played by wind and percussion instruments, generally while marching.

“While ‘Daechwita’ is popular culture’s smart adaptation of Korean heritage, Leenalchi’s music is gugak’s success in finding ways to communicate with popular culture, which has been gugak musicians’ wish since the 1960s,” said Kim Hee-sun, professor of music anthropology at Kookmin University. 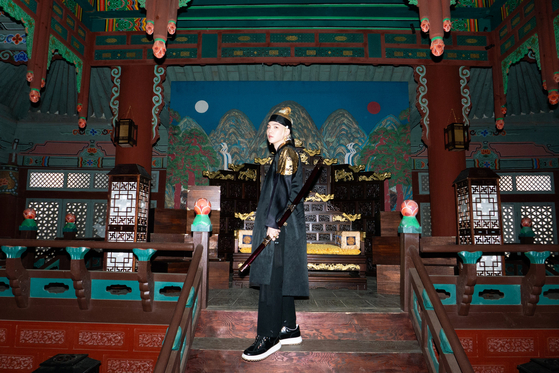 Suga of the K-pop band BTS in the video for his solo song "Daechwita." [BIG HIT ENTERTAINMENT]


“Leenalchi has broken the prejudice that gugak is heavy and boring, by creating songs full of fun and hooks, which have characteristics of popular culture, based on the contents of gugak,” she added. Such characteristics of Leenalchi’s songs have brought about numerous comments by foreign viewers such as, “I don’t understand anything but I can’t stop listening to this song.”

The band Leenalchi consists of seven members including four pansori singers, called sorikkun. The leader is Jang Young-gyu, 52, a composer, film score director and bassist. Jang has scored many Korean box office hits such as the horror film "The Wailing" (2016), the zombie action film "Train to Busan" (2016) and Western action film “The Good, the Bad, the Weird” (2008).

The other members include drummer Lee Chul-hee, 50, who also previously played in the band Ssing Ssing led by Jang; and bassist Jeong Jung-yeop, 37, who was active in the famous Korean indie rock band Kiha and the Faces, which broke up in 2018.

The four sorikkun are Ahn Yi-ho, 40; Lee Na-rae, 34; Kwon Song-hee, 33; and Shin Yu-jin, 27. The JoongAng Sunday recently sat with the seven members at the Music Creation Center for indie musicians in Mapo District, western Seoul. Below are edited excerpts from the interview.

Your band was named after Lee Nalchi (1820-1892), one of the “Eight Famous Vocalists” of the late Joseon period (1392-1910). He was also famous as a tightrope walker. Did you consider this when you named the band? Did you intend to balance well between gugak and modern pop music, just like balancing on a thin rope?

Ahn: Lee Nalchi was a genius in various fields. But most of all, we liked the unfamiliar and fresh sound of the name Nalchi. [Nalchi means a flying fish in Korean and is rarely used for a person’s name]. We also thought about balancing between the traditional and the contemporary, as we were repeatedly asked about the band's name in association with the fact that Lee Nalchi was a tightrope walker. However, at first, we didn’t think about it and never dreamed of getting so much attention in regards to our band or its name.


Leenalchi was formed in 2019 but I heard the leader, Jang, had already experimented with various styles of music based on gugak, leading the old court music and Buddhist music project “Be-Being” and then the band “Ssing Ssing” that fuses old Korean folk music with glam rock and psychedelic rock. Why do you continue to do such experiments?

Jang: I have many friends who do traditional Korean music. So, just out of curiosity, I did various projects with those friends. But over time, some of the friends quit music due to bread-and-butter issues. Seeing this, I felt the need to seek ways to incorporate more popular music with gugak artists. 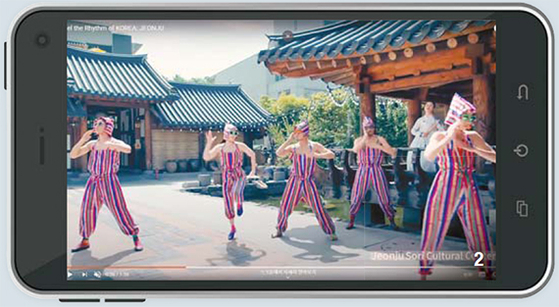 Ambiguous Dance Company members dance to the music of Leenalchi in the video "Feel the Rhythm of Korea; jeonju." [Screen Capture]


Do you feel that gugak has become more popular after the hit “Tiger is Coming”?

Ahn: Before, I never received such attention and feedback from the general public that I do now. Happily, the attention seems to be spreading gradually to other sorikkun and other gugak musicians. A video of the traditional pansori performance of the master vocalist Bang Sumi, who participated in the “Feel the Rhythm of Korea” with us received hundreds of thousands of views. Some people said they went to the full-length performance of pansori repertoires at the National Theater for the first time.

Lee Na-rae: Before [the success of the “Feel the Rhythm of Korea” series], 80 percent of the audience of my performances were gugak musicians. Now, most of my audience are the general public. I can know this from chuimsae [exclamatory words or reactions from gosu or audience in between singing in pansori performances] from the auditorium, because the ordinary people’s chuimsae is different from that of professional chuimsae of gugak musicians.


How do you fuse pansori songs into your contemporary music?

Jang: We create rhythms first and then search for pansori songs that will go well with the rhythms. And then we discuss whom of the four vocalists will take which part in the song and in what parts they will sing together. Now there are only a few songs remaining unused in “Sugungga.” We are thinking about how to recreate the remaining songs.

Kwon: In fact, the music we made under the name of Leenalchi is relatively easy to write, because we adapted the song of “Sugungga” without great transformations. We worked so that the [instrumental] music of the band should not collide with pansori songs. 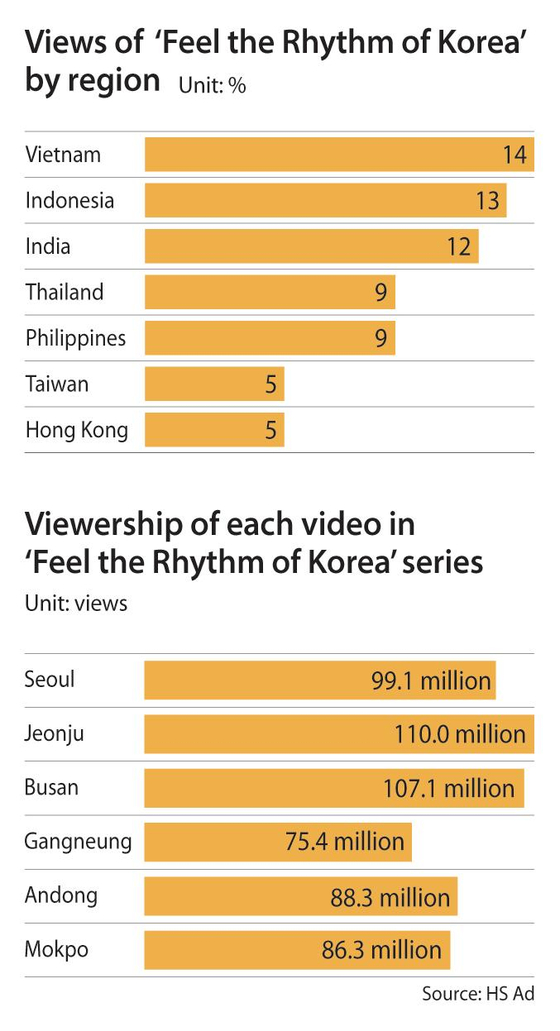 Then, is the only drummer of Leenalchi equal to the gosu of pansori?

Lee Chul-hee: There are four vocalists and two bassists in this band. Their sounds flow and mix with each other. Amid these, someone should play the role of a pillar. I play only the simple basic beats honestly, like the pillar.

Lee Na-rae: He does more than that. Gosu of pansori should provide chuimsae in the openings in between songs of sorikkun so that the vocalist can be cheered and get some elasticity in the next song. He gives chuimsae with his drum from time to time — with great sense.


The success of Leenalchi seems to be partly thanks to Ambiguous Dance Company. What do you think about them?

Ahn: When I saw them dancing for the first time, I was singing on an outdoor stage. I exclaimed even during my singing because their dance was so fun to watch. Later, I saw the videos in which they dance to our music and I loved them. I hope we will continue to work with them for a long time.

Shin: Their dance seems to be just humorous but the choreography is very detailed and difficult to follow. I tried but failed (smiles).

Kwon: Although we gained great attention from the public, we could not meet them in person as all the major concerts and tours were canceled due to the Covid-19 pandemic. I would like to feel the heat and energy of the audience in 2021.

Lee Chul-hee: This year, none of the local rock festivals took place [offline]. I hope we can participate in a rock festival next year.

Jeong: Still, I feel blessed this year. I love playing music in a band. When Kiha and the Faces broke up, I thought it would be difficult to create music in another band. But I came to participate in Leenalchi and have been well received by the public. I’m so happy.

Seulgi is fourth member of Red Velvet to contract Covid-19