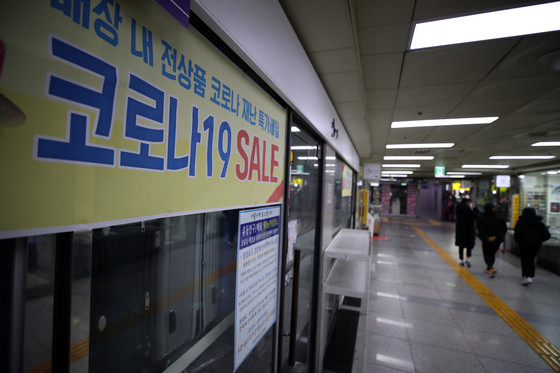 A notice posted on a store Sunday in the underground shopping area in Myeong-dong, central Seoul, advertises a sale and makes a plea for a rent cut. [YONHAP]


Businesses say that the next round of relief money, the third attempt by the government to keep small companies whole, will barely cover a month of rent.

The government is expected to distribute emergency relief funds of between 1 million ($900) and 3 million won in January. On top of the basic 1-million-won grant, businesses still open but forced to limit the number of visitors will be given an additional 1 million won. Those entirely shut down, such as noraebang or indoor gyms, will receive an additional 2 million won.

Eight out of 10 small business owners operated out of rented space in 2019, according to a report from Statistics Korea on Monday. The report, which looked at 40,000 small businesses in 11 industries, showed that the average rent was 1.27 million won. That's slightly more than what the government will be distributing.

The next round of emergency relief funds, which are aimed to help cover rent, is from 500,000 won to 1 million won more than the second round of grants in October. For businesses to be eligible, they will have to have suffered some harm as a result of social distancing rules or have had their sales slashed to under 400 million won.

According to the report, the percentage of small business owners with rented space last year, which was 79.3 percent, rose by 0.5 percentage points on year. Those with their own spaces to run their business were 20.7 percent of the total.

Rent varied vastly by region. In Seoul, it averaged 1.65 million won, 30,000 won higher than 2018. Sejong came in at 1.47 million won and Gyeonggi at 1.45 million won. Monthly rent in Gangwon and North Gyeongsang was relatively low.

Because of the pandemic “it has been burdensome to pay the monthly rent,” said a restaurant owner in Seoul. “Every won is precious, but a grant that merely covers a month’s rent is not very effective.”

The deteriorating market situation and increasing competition were identified as major difficulties for the merchants. Others identified the cost of raw materials, rent and minimum wage. Financial support and tax support were the most desired policies.

Sales per business was 234.7 million won in 2019 on average, 0.2 percent lower than the previous year. The operating profit was 33 million won, a 3 percent on-year drop.